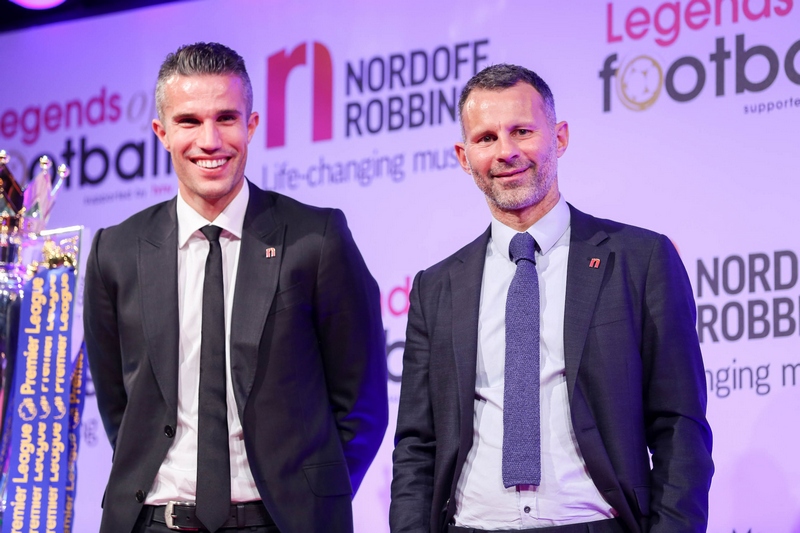 A host of former Manchester United stars were back together on Wednesday night when the annual Legends of Football dinner in London celebrated 25 seasons of the Premier League.

Van Persie won a special accolade - his sublime volley in United's title-clinching victory over Aston Villa in 2013 was voted the greatest goal by members of the '100 Club', an exclusive group of players who have notched more than a century of Premier League strikes. Third place in the poll went to another ex-Reds star, Paul Scholes, for his screamer against Aston Villa from 2006 while Alan Shearer's rocket for Newcastle against Everton in 2002 was the runner-up.

"This is a huge honour, especially because it was the players who voted for it and because this is the hardest league in the world to score goals in.

"It's very difficult to pick a winner because every single one meant a lot to every player and there were some amazing strikes. It was a very special day for me and the club, to win the league title, my first in England and the 20th for Manchester United. I believe this is the best goal I have scored because of the occasion.

"I'd like to thank everyone who voted and it's also a huge honour to stand alongside these guys in the '100 Club.' When I was little boy I never dreamed I could be standing here with them, I just wanted to play football. It's amazing to be part of this group."

In its former glory as The HMV Football Extravaganza, the Legends of Football dinner enjoyed 20 years of celebrations to mark the achievements and careers of some of the greatest footballers and managers the game has witnessed. Legends including Sir Stanley Matthews, Brian Clough, Sir Bobby Charlton, Denis Law, Sir Alex Ferguson, Jose Mourinho, Eric Cantona, Sheringham and Giggs to name but a few, have all received the prestigious award and to celebrate last year’s 20th anniversary, David Beckham joined the esteemed group.

Legends of Football has raised more than £7 million in total for Nordoff Robbins, which is dedicated to changing the lives of vulnerable and isolated people. Music therapy is a specialist use of music that aims to facilitate physical and emotional well-being, and to promote the development and retention of key communication skills. The precise total generated by Wednesday's event was a fantastic £404,851.