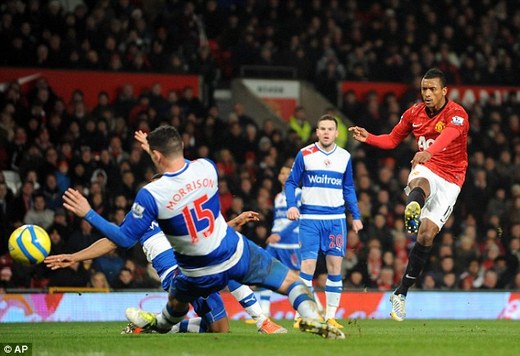 Second-half goals from Nani and Chicharito sent Manchester United into the quarter-finals of the FA Cup after a tense, attritional victory over Reading at Old Trafford.

Brian McDermott's Royals stifled United for long periods but Nani, on for the injured Phil Jones, rifled home the opening goal after 69 minutes and superbly laid on the second just two minutes later.

Jobi McAnuff struck with 10 minutes remaining to ensure a nervy finish for the home support, but United held on to secure a last eight tie against either Middlesbrough or Chelsea.

Sir Alex Ferguson had championed the depth of the talent pool at his disposal ahead of the game, and sought to demonstrate it with eight changes to the side which fought out a draw at Real Madrid five days earlier, with only Jones, David De Gea and Danny Welbeck retaining their place.

The opening made by the much-changed Reds augured well. In little more than a minute United might have moved ahead as Chicharito's shot was blocked by Adrian Mariappa, as was Welbeck's rebound, and the ball ricocheted marginally too high for Antonio Valencia to nod into the yawning goal.

Less than two minutes later Welbeck forced Reading goalkeeper Adam Federici into his first save of the evening with a powerful left-footed effort, before Ashley Young's shot was bravely blocked by Sean Morrison as the winger looked certain to sidefoot home the opening goal of the  game.

Reading looked overawed and disjointed in a one-sided opening five minutes, but settled from the moment Nicky Shorey fizzed in a vicious corner which somehow passed through a corridor of bodies.

After United had been frustrated by the visitors in a fairly tepid 10 minute spell, a patient spell of possession play culminated in a fine double save from Federici, who first pushed away Tom Cleverley's low effort, then brilliantly plunged to his right to somehow turn Young's follow-up around the post.

That brief flurry of activity was out of keeping with a pedestrian opening half which was unfortunately most notable for the withdrawal of Jones, who was left limping heavily after a crunching, 50-50 challenge with McAnuff.

The defender was replaced by Nani, who quickly provided the outstanding moment of the half with an outrageous first-time volley which thudded off Federici's right-hand post.

Clearly keen to impact on proceeding, the Portuguese then forced Reading's Australian stopper into action with a vicious, dipping left-footed effort which was only just pawed over the bar in the final act of the half.

The upsurge in tempo carried over into the second half, with United's approach full of vim and vigour, yet once again quickly faded out in the face of Reading's physical, resolute approach.

Nemanja Vidic's heavily deflected header needed to be cleared off the line by Noel Hunt, Federici comfortably parried away Anderson's right-footed effort and Nani scuffed a shot narrowly wide as United gradually cranked up the pressure. 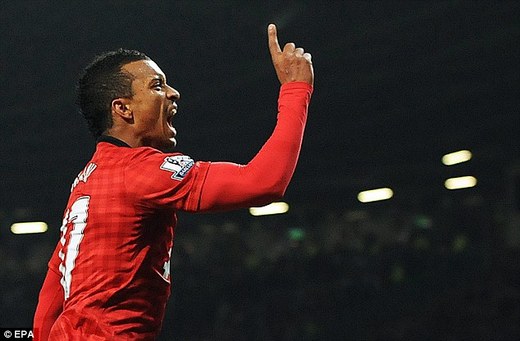 By the time the Portuguese arrowed another left-footer wide from distance, Robin van Persie had been introduced in place of Young as Sir Alex Ferguson sought to stave off the growing spectre of a replay. Sure enough, the dam broke with 21 minutes remaining.

Patient approach work between Cleverley and Valencia culminated in Nani controlling with his left and firing a 15-yard right-footed effort into Federici's far corner. Joy and relief mingled as Old Trafford roared its delight.

That bellow had barely subsided when Reading almost silenced all-but the small pocket of travelling supporters, as Adam Le Fondre hooked in a shot which required a fine reaction stop from De Gea. It proved a pivotal moment in the game, as United struck decisively just seconds later. 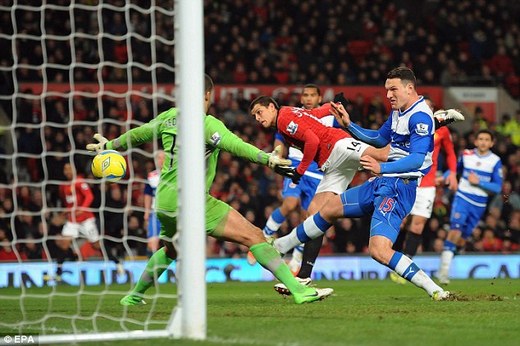 Again Nani was involved, speeding down the right flank and curling in a magnificent cross which Chicharito reached ahead of Federici to nod into the untended goal. Just as it seemed that United's progress thereafter would be a smooth process, however, Reading demonstrated the pluck which has punctuated their season to date.

Hunt's troublesome presence prompted the ball to bobble off Smalling, and McAnuff pounced, holding off the attempted challenge of Alexander Buttner and steering a finish past the exposed De Gea.

Michael Carrick was introduced to bring calm and perspective to United's play, and his steadying influence was apparent as the dying stages, including four added minutes, were navigated comfortably.

United might have added a third as Chicharito's stinging effort was fended away by Federici and Nani volleyed the rebound just wide, but there was one major fright to survive as Shorey curled in a fine free-kick which pinballed around rhe six-yard box before deflecting behind.

Federici was required to keep out another Chicharito piledriver and Nani dipped a 30-yard free-kick narrowly over the bar, but the scoreline remained sufficient to prolong United's interest in all three major competitions.