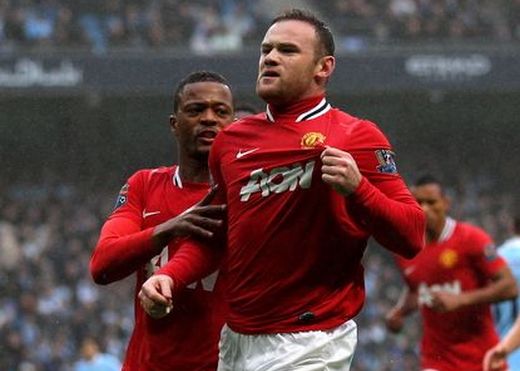 United edged into the fourth round of the FA Cup after an enthralling, draining victory over holders Manchester City at the Etihad Stadium.

The Reds bossed a thrilling first half in which City skipper Vincent Kompany was contentiously dismissed, and had a three-goal lead at the interval through Wayne Rooney's brace and Danny Welbeck's acrobatic volley.

To their credit, City rallied after the break and pulled goals back through Aleksander Kolarov and Sergio Aguero, and almost snatched an injury-time leveller when Anders Lindegaard had to fist away a Kolarov free-kick.

The pre-match build-up was overshadowed by the shock announcement that Paul Scholes had reversed his retirement, signing a deal to return until the end of the season and immediately taking a place on the United bench.

Amid the furore, the news that Chris Smalling and Jonny Evans had returned from injury was almost lost. The former was fit enough to start at centre-back, with Phil Jones moving over to right-back, while Evans took a place on the bench.

Just as United could savour some rare good news on the injury front, the hosts found themselves deprived of several important players. Mario Balotelli and Edin Dzeko missed out through knocks, while Gareth Barry served a one-match ban and both Yaya and Kolo Toure reported for international duty.

Nevertheless, City began the game on the front foot, herding United back and coursing with confidence on their fruitful home turf. The Reds were given no time on the ball, evidenced in heart-stopping fashion when Aguero charged down Lindegaard's clearance. Fortunately for the Dane, the ball ricocheted wide of the target.

Having survived that brush with a deficit, United were soon ahead. Rooney dropped between City's lines to collect the ball before spreading it wide to Valencia. The Ecuadorian swung the ball towards the far post, where Rooney bulldozed between Nani and Micah Richards to power a header against the underside of the crossbar and into the net.

The away end was presently a heaving, writhing mass of delirium - and the mood was further heightened two minutes later when City skipper Kompany was dismissed in controversial fashion. The Belgian launched into a two-footed challenge to rob Nani of possession, but cleanly won the ball. Referee Chris Foy paused before brandishing his red card, whipping the Etihad Stadium into a storm of fury.

City's initial response was one of defiance. Aguero forced a magnificent full-strength save from Lindegaard with a curling effort from the edge of the area, then smashed another effort into the side-netting after seizing on a defensive misunderstanding between Ferdinand and Jones.

Nani fed Patrice Evra down the left flank and, though the Frenchman's cross was half-cleared, Welbeck pounced on the loose, looping ball and hooked an unstoppable volley into Constel Pantilimon's bottom corner from 12 yards. The game's only Mancunian starter revelled in the moment, kissing his United badge as he wheeled away in delight.

Welbeck was involved again 10 minutes later as United established a three-goal lead. The 21-year-old was needlessly scythed down by Aleksander Kolarov inside the City area, prompting the award of a clear penalty by referee Foy. Pantilimon superbly parried out Rooney's penalty, only for the United striker to calmly nod the rebound into the unguarded goal.

The overriding lesson learned by United after October's 1-6 debacle at Old Trafford was when to shut up shop, and Roberto Mancini showed that he had also heeded those events, withdrawing David Silva and Adam Johnson and replacing them with Stevan Savic and Pablo Zabaleta in a 3-5-1 formation.

The Italian's approach bore fruit when Kolarov arrowed home a spectacular free-kick from almost 30 yards within two minutes of the restart. United immediately hit back, as Nani drifted a header wide and Rooney shot off-target from 25 yards.

Sir Alex sought to shore up his side's midfield with the introduction of his new signing. Sporting number 22 for the first time since the 1996 FA Cup final, Scholes trotted onto the field in place of Nani, who was carrying a booking.

Shortly after United had been denied what appeared another clear penalty, as Kolarov felled Valencia without censure, City took another chunk out of the visitors' lead. Milner crossed for Aguero and, when his initial shot was spilled by Lindegaard, the little striker pounced to send the home fans wild.

The Reds needed to remain calm. The lion's share of possession was assured, but City's counter-attacking menace was ever-present. The home support were suddenly resurgent, and were baying for a penalty when Kolarov's cross struck Jones on the arm, via his thigh, only for referee Foy to decline.

Hearts were in mouths for all of a Red persuasion when Kolarov lined up a free-kick just outside the area in injury-time, but Lindegaard just about palmed the ball to safety and United held on for a draining victory.

Despite the feelings of relief which greeted the full-time whistle, the bottom line remains United's progress into the fourth round of the FA Cup, having eliminated the holders on their own patch.

Anders Lindegaard
The Dane enjoyed a mixed game, making a magnificent early save from Aguero but then spilling the Argentine's shot for City's second goal.

Phil Jones
Took an early clattering from Smalling and seemed slightly shaken thereafter. Made a few errors in possession but his energy up and down the right flank was vital.

Rio Ferdinand
The veteran defender was given a rough ride by the impressive Sergio Aguero, but made some vital interceptions, especially late on when they were needed most.

Chris Smalling
A welcome return after a bout of tonsillitis, and linked up well with Ferdinand. Looked calm and composed for the most part, and will now hope for a run of fitness to nail down a starting berth.

Patrice Evra
The skipper led by example by throwing himself into challenges and charging forward in support of Nani wherever possible.

Antonio Valencia
The Ecuadorian dominated Aleksander Kolarov down their flank, flinging in a brilliant cross for Rooney's opener. Somehow referee Foy declined to award Valencia a second-half penalty after his marker's blatant foul.

Michael Carrick
Once again, the cool, collected head in the centre of midfield. Kept possession at key times and dictated the Reds' attacking tempo in tandem with Giggs.

Ryan Giggs
Another eye-catching outing for the Manchester derby's most experienced player. Popped passes about and used his mobility and flexibility to pick his way through the City midfield.

Nani
A real thorn in City's side and played a major role in the Reds' second goal. Was treading a disciplinary tightrope after his booking, however, which prompted his early withdrawal.

Wayne Rooney
Outstanding, especially in the first period. Bagged a magnificent header and showed great alertness to react first to his own saved penalty. City had no answer when he dropped into midfield, and his partnership with Welbeck again stood out.

Danny Welbeck
One of the rare bright spots in October's humbling, the Longsight striker again enjoyed an eye-catching afternoon and capped a marvellous display with a brilliantly-taken volley.

Paul Scholes (for Nani, 59)
A second debut to remember for the United legend. Showed a bit of ring rust in the run-up to City's second goal, but was soon popping passes about in trademark fashion.

Anderson (for Welbeck, 75)
Went on with the intention of keeping it simple and seeing out the game, which he duly did.