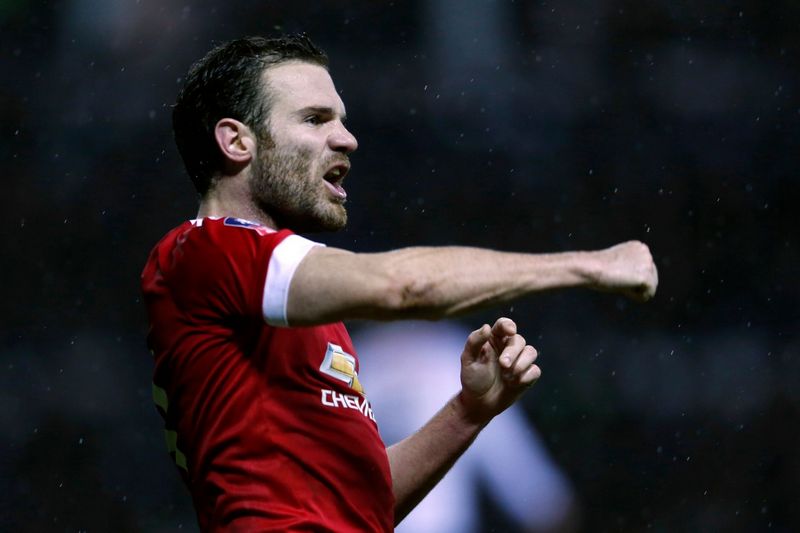 Manchester United progressed to the fifth round of the Emirates FA Cup with an entertaining victory over Derby County at a wintry iPro Stadium on Friday night.
Wayne Rooney gave the Reds the lead with a wonderful early goal – his sixth strike in as many games – but Derby equalised against the run of play before half-time through George Thorne.
However, Louis van Gaal’s side, who dominated much of the game, were not to be deterred and Daley Blind netted smartly midway through the second half, before Juan Mata added a late third to secure United’s place in Sunday’s draw.
Van Gaal made two changes to the side that started against Southampton last weekend, with Guillermo Varela coming in for Matteo Darmian and Mata replacing Ander Herrera. A deafening roar greeted kick-off, with 5,471 noisy visiting fans – United’s biggest away end of the season – more than playing their part, as they proceeded to roll through a traditional repertoire that included a tribute to Nemanja Vidic following the Serbian’s retirement. 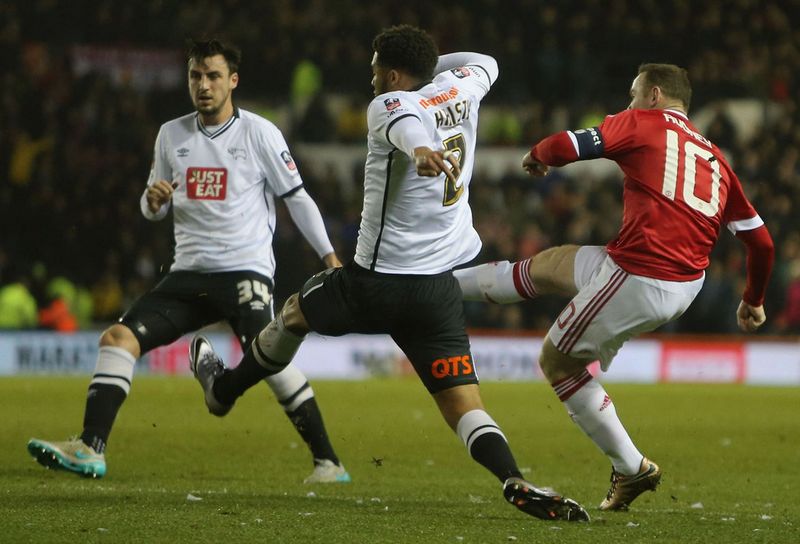 In a bright start by the Reds, Anthony Martial had a good early chance, firing over from just inside the box. But it didn’t take much longer for the Reds to open the scoring – and in superb fashion, as Rooney cut inside to bend a shot into the far corner just after the quarter-hour mark.
With the Championship promotion-chasers seemingly content to sit back and grant United possession, van Gaal’s sharp-looking side continued to probe and Martial narrowly failed to control a return pass from Rooney that would have left the Frenchman one-on-one with goalkeeper Scott Carson. 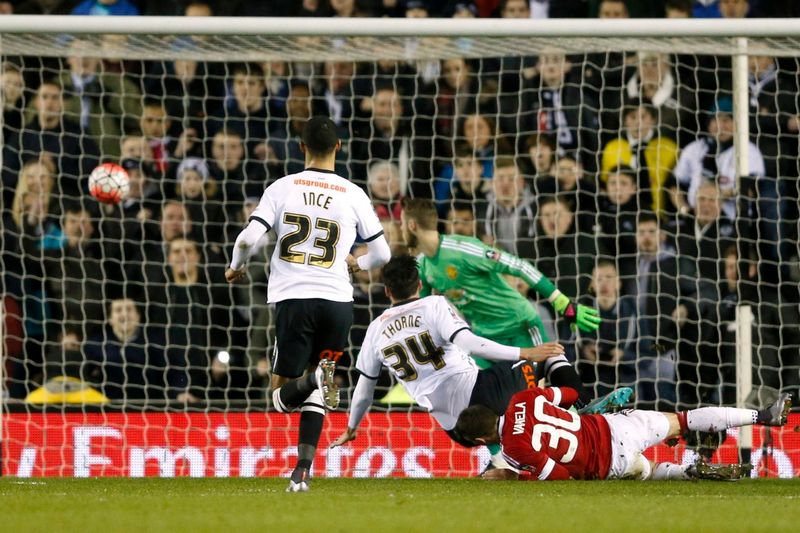 The Reds were utterly in control but, eight minutes before the break, Derby equalised out of the blue, as midfielder Thorne ran onto a neat ball over the top to slot past David De Gea.
Back came United and, after skipping past Thorne on the left, Martial crossed towards Rooney but Stephen Warnock did well to get to the ball ahead of his opposing captain. At the other end, Chris Smalling made an excellent last-ditch tackle on the Rams’ top scorer, Chris Martin, and the sides went in level at the break.

Possession: Derby 33% United 67%
Shots at goal: Derby 4 United 6
Shots on target: Derby 3 United 2
Corners: Derby 1 United 3
The Reds started the second half on the front foot and the ever-dangerous Martial ghosted past his marker on the left but couldn’t pick out a red shirt with his cross. Nick Blackman then curled over a powerful effort after a swift attack as Derby showed they were still a threat on the break.
Just before the hour-mark, Mata came within a whisker of restoring United’s lead as he headed Jesse Lingard’s deflected cross narrowly wide, before Marouane Fellaini could only head a corner straight at Carson. 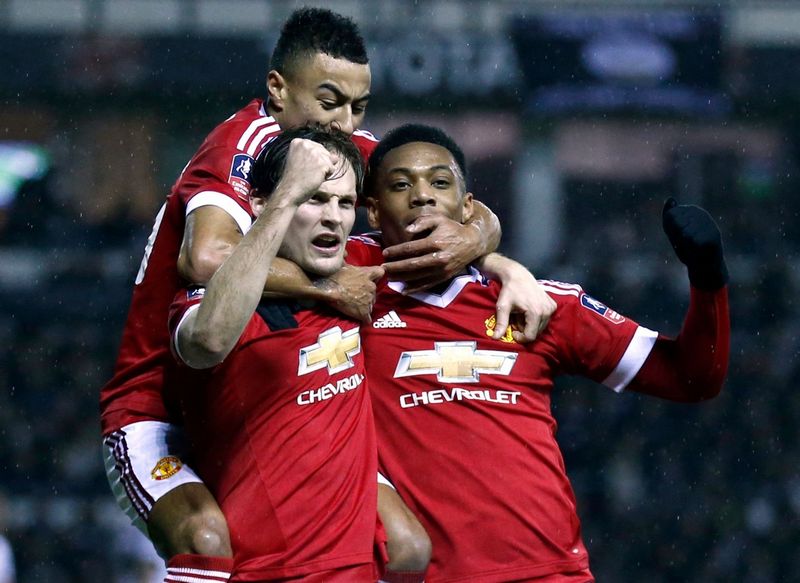 With the away end still making a terrific noise, United continued to carve out openings and Blind charged forward from centre-back to apply a brilliant first-time finish to Lingard’s cross and put the visitors back ahead. 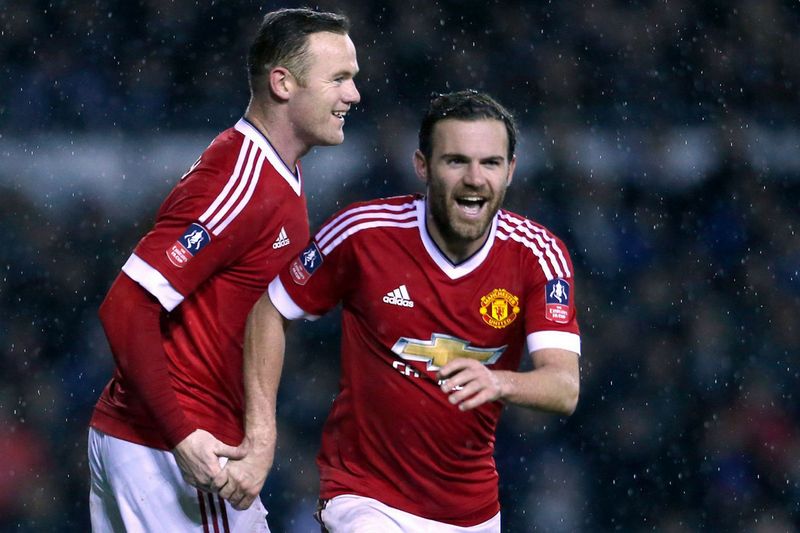 That goal seemed to deflate Paul Clements’ side and Mata killed the game off with a late third, a simple finish after Martial had beaten his man for the umpteenth time down the left. Job done – the quest to reach Wembley goes on.

Van Gaal: "We dared to play again and, in spite of Derby's pressure in the second half, we created chances and we scored some fantastic goals. I am very happy."

Mata: "We did what we have to do every game. We were quicker, we created chances and tried to play in a positive way."

Blind: “Of course a win is always a boost but you have to take it game by game and step by step. There is an important game on Tuesday coming up. We have to move on from this and keep the confidence up.”

#MUFC progressed to the fifth round of the Emirates FA Cup with an entertaining victory over Derby County at a wintry iPro Stadium on Friday night.