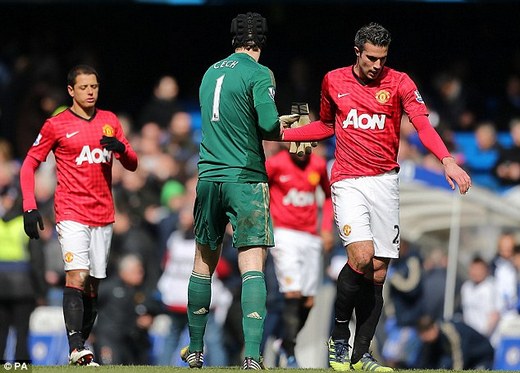 Manchester United's bid to win the Double - and bring home the FA Cup for the first time since 2004 - ended on Easter Monday afternoon when a solitary goal from Demba Ba sent Chelsea into the semi-finals to meet Manchester City.

The quarter-final replay didn't match the excitement of any of these club's previous three meetings this season, although the second half was a considerable improvement on the first period - featuring not only Ba's brilliant and decisive volley, but also a world-class save from Petr Cech to deny Javier 'Chicharito' Hernandez a headed equaliser.

Sir Alex Ferguson made seven changes to the line-up which kicked off 48 hours previously at Sunderland, with only Chris Smalling, Michael Carrick, Antonio Valencia and goalkeeper David De Gea asked to start a second match in quick succession. The absence of Wayne Rooney from both Easter fixtures grabbed the most attention, with the club confirming he'd suffered a groin injury while on England duty - a blow which he's likely to recover from in time for the league derby against Manchester City next Monday night.

Rafael Benitez brought back some of his big guns after resting them against Southampton on Saturday backfired with a defeat. Most notably, he started with Oscar and the recalled Juan Mata and Eden Hazard as a creative trio behind lone striker Demba Ba, and restored Ramires alongside John Obi Mikel as the anchoring pair. Sir Alex Ferguson's tactic to counter this unit was to beef up his central midfield with Phil Jones, while Valencia operated at right-back.

It summed up the replay’s disappointing start that a hamstring injury suffered by Chelsea left-back Ashley Cole was the most noteworthy incident of the first 20 minutes. The seven-times FA Cup winner pulled up in a sprint duel with England team-mate Danny Welbeck but even though the Reds’ surge forward continued, it faltered with a poor touch by Nani at the edge of the box. The Portuguese winger looked rusty at this point in the game, perhaps understandably after not playing since the original meeting at Old Trafford three weeks ago. But Nani still provided Petr Cech with his first test, a teasing free-kick cross which the Chelsea giant just managed to punch away. 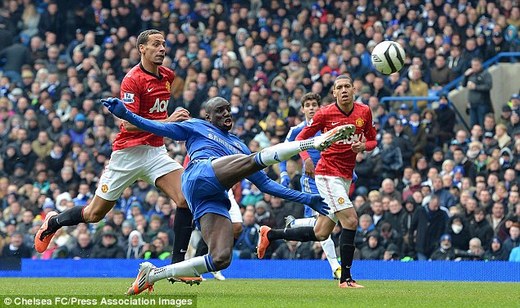 On target: Demba Ba was at full stretch to score for the hosts in today's FA Cup replay

At the other end, David Luiz curled a set-piece high over the crossbar, not long after his namesake David De Gea used his legs to save the match’s first shot on target, from Demba Ba in the 31st minute. Javier Hernandez could have beaten Ba to it had he not slipped at the point of pulling the trigger, after cutting into the penalty area at pace from the right wing. Longer range efforts from Nani at one end and Eden Hazard at the other did not require action from the goalkeepers, but Cech made an unorthodox save with his right foot when De Gea found Chicharito with a kick from his hands and the Mexican’s resulting 20-yard shot took a wicked swerve.

Jones made an early attempt to up the ante after the interval, drawing a foul from David Luiz in a dangerous position but Nani’s  free-kick went straight into the wall. Moments later, Chelsea drew first blood when Mata floated a fine ball over the top and Ba hooking a superb right-foot volley into the top left-hand corner with De Gea rooted to the spot. For the first time in this drawn-out quarter-final, United were losing – and Tom Cleverley also lost his cool momentarily, clattering into Ramires and earning Phil Dowd’s first yellow card of the day. The second caution wasn’t long in coming, with Ryan Bertrand cynically chopping down Chicharito as United tried to break out from a spell under the cosh.

The Reds' striker almost meted out a different kind of punishment when he connected with Welbeck’s cross from the right-hand edge of the area. But as Chicharito’s header arrowed towards goal, Cech thrust out his left palm and pushed the ball to safety over his own crossbar. It was a truly world-class save, one which the United striker could only stand and marvel at with a big smile. De Gea’s next stop wasn’t bad either, although it went undetected with the officials feeling Mata’s strike went straight into the side netting.

With the scent of goals in the air, Sir Alex sent on Robin van Persie and Ryan Giggs, both of whom netted at Stamford Bridge earlier in the season. Tom Cleverley and Nani were the men to make way and they would have witnessed a second Chelsea goal from the bench, had Hazard not fired beyond the far post following a rare Carrick error. The Blues continued to press, giving Ferdinand and Jones in particular plenty to do, but the Reds couldn’t offer quite as much going forward –  although Valencia went close with a shot that whistled wide of the right-hand post and Welbeck caused Azpilicueta to pick up Chelsea’s second booking.

Chelsea looked more likely to build on instead of lose their lead, even if De Gea could afford to stand and watch off-beam efforts from Ramires, Mata and Oscar. But Sir Alex’s third substitution, Ashley Young replacing Welbeck, almost paid off when the England winger played a simple yet effective pass to Evra inside the area. The Frenchman accurately cut the ball back, only for van Persie – of all people – to steer a left-foot volley well over from eight yards out.

De Gea’s routine save from Mata maintained the suspense, while yellow-card fouls by the Chelsea talisman and his fellow midfielder Oscar did nothing to help the flow of the game. Young later found van Persie directly with a cross but the Dutchman headed over the bar and United’s Double dream was over. Concentrating on winning the title as quickly as possible will now be the Reds’ sole aim, continuing with a visit from Manchester City in seven days’ time.