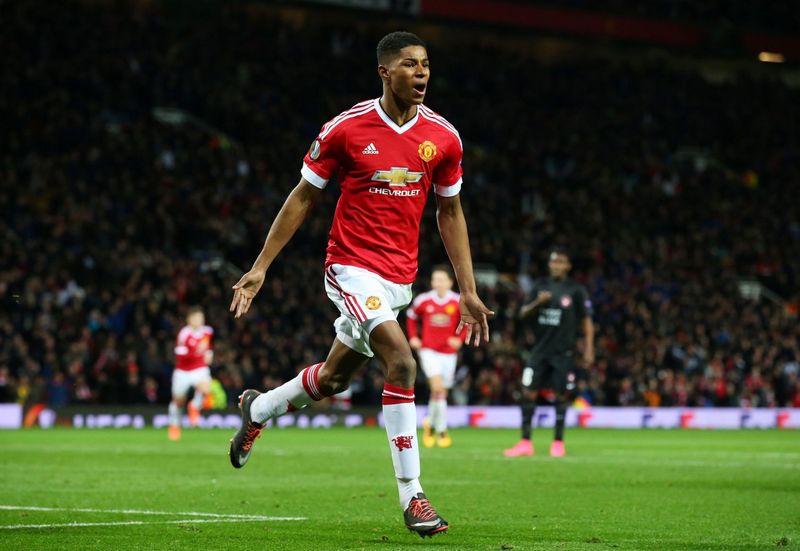 Young striker Marcus Rashford had a night to remember as he marked his debut with a brace that helped fire Manchester United into the last 16 of the Europa League as the Reds overturned Midtjylland's first-leg advantage despite falling behind.
Pione Sisto followed up his goal in Denmark with a stylish opener but a much-changed Reds line-up showed great resolve to hit back swiftly through Nikolay Bodurov's own goal. Mikkel Andersen saved Juan Mata's first-half penalty but Rashford stole the show after the interval with two poacher's strikes to end the visitors' resistance.
As the Danes tired badly, and lost Andre Romer to a second yellow card in the closing stages, Ander Herrera converted a spot-kick and Memphis Depay wrapped it up with a goal his performance deserved.
As in the first leg, United lost a key man in the warm-up with Anthony Martial forced to make way for Rashford, who was promoted from the bench to deputise for the French forward. Rashford had a low shot turned away by Andersen as the Reds set about trying to overturn the first-leg deficit. 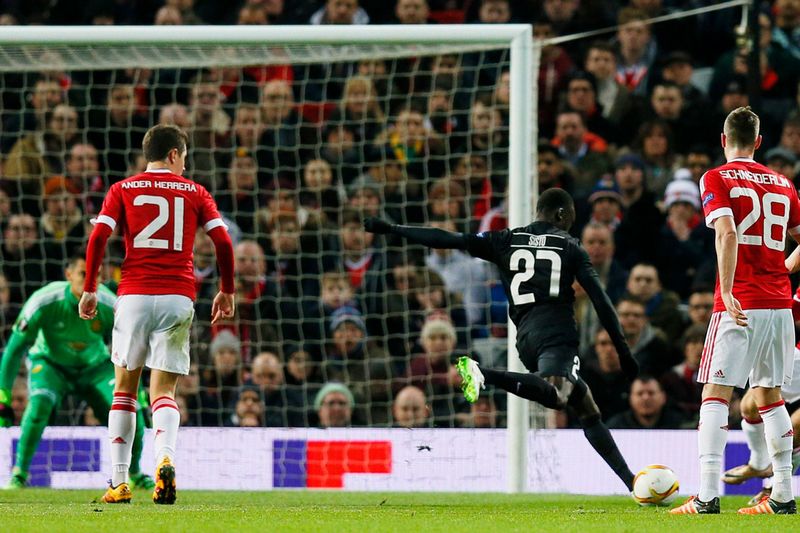 Kian Hansen almost deflected a Memphis cross into his own net and Kristoffer Olsson's clearance cannoned off Jesse Lingard and into the side-netting as the visitors rode their luck with some desperate defending. Out of nothing, though, they extended their overall lead to 3-1 on 27 minutes. Sisto dribbled through the defence before supplying a neat finish that rolled wide of Sergio Romero for the opener.
Romero escaped with a risky clearance seconds later but Louis van Gaal's men regained their composure with Memphis firing straight at Andersen after being picked out inside the area by Morgan Schneiderlin's astute pass. The ever-positive Memphis whistled another shot wide and was instrumental in the equaliser. 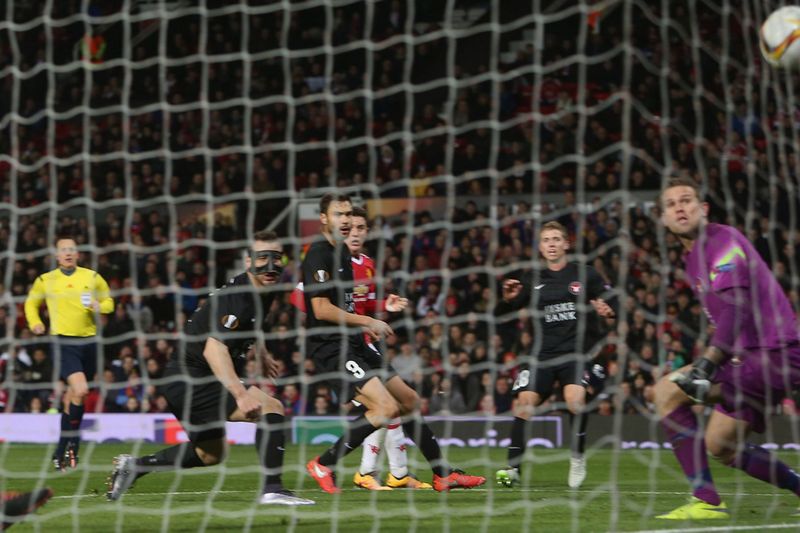 Guillermo Varela and Mata were involved in the move that led to Memphis powering down the left and his dangerous cross was turned past Andersen by Bodurov. Schneiderlin sent an overhead kick off target and went closer with a header that struck a post from Joe Riley's superb cross. 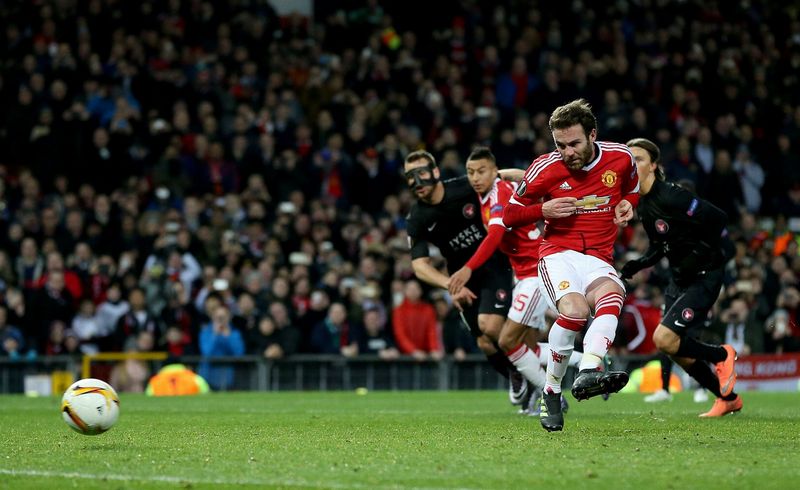 When Herrera was hacked down by Romer inside the box, although Daley Blind had the ball in a promising position, referee Istvan Vad pointed to the spot. Mata stepped up but shot too close to Andersen, who pulled off a smart save low to his right tip the effort away with only a couple of minutes to go in the first half. 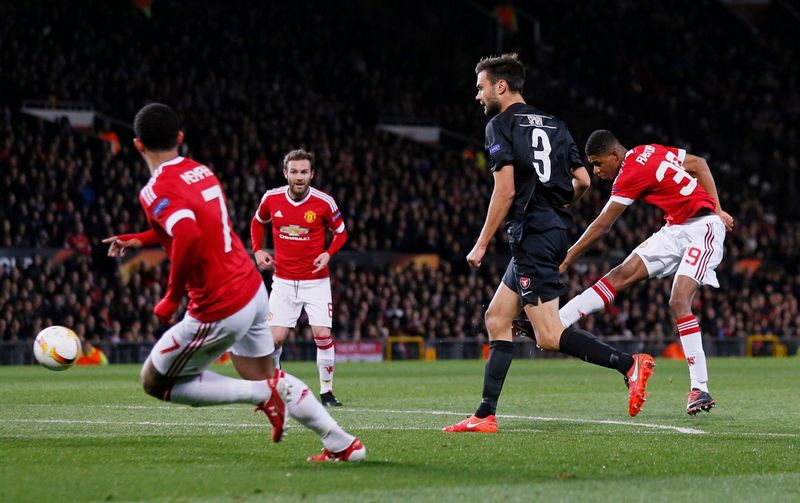 United kept up the pressure after the restart but Schneiderlin and Herrera both contrived to miss excellent chances, with the Spaniard heading the wrong side of the near post following more good wing-play by Memphis. Midtjylland attempted to eat up time at every opportunity but were undone when Mata kept the ball in to centre for Rashford to pounce from close range to level the aggregate score at 3-3 with 63 minutes gone. 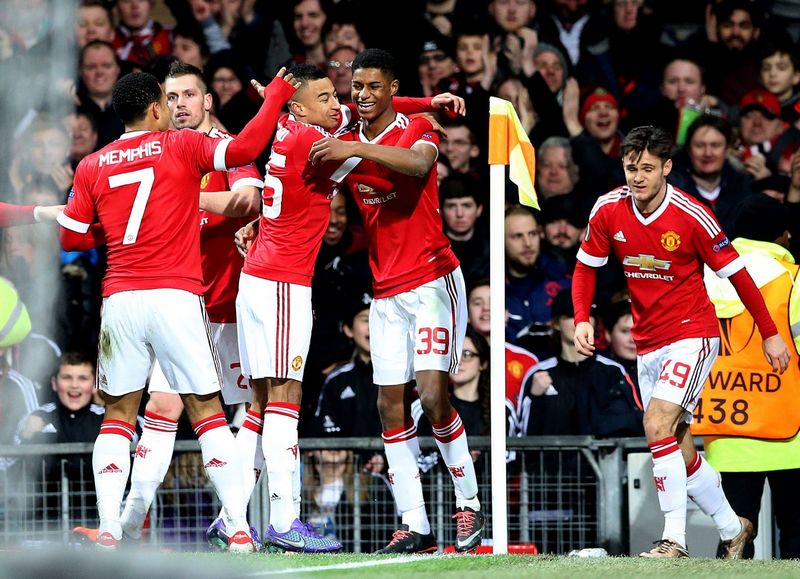 Things got even better for the youngster when he was in the right place at the right time again to convert Varela's cross from the right, soon after the Uruguayan switched flanks with Riley. It put United ahead overall and Rashford nodded over as he chased his hat-trick. 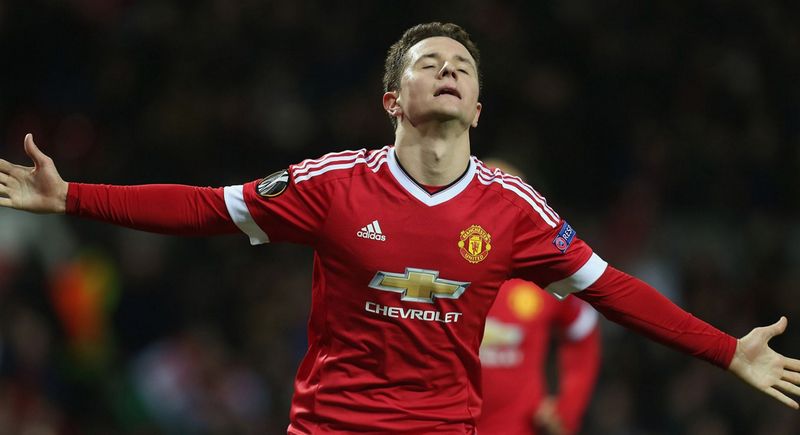 The referee had seen fit to caution Lingard for simulation rather than award a second penalty but he did point to the spot again when Memphis had a shot handled by Kian Hansen, with Herrera making no mistake by smashing past Andersen. Soon afterwards, Romer was dismissed for tugging back Memphis. 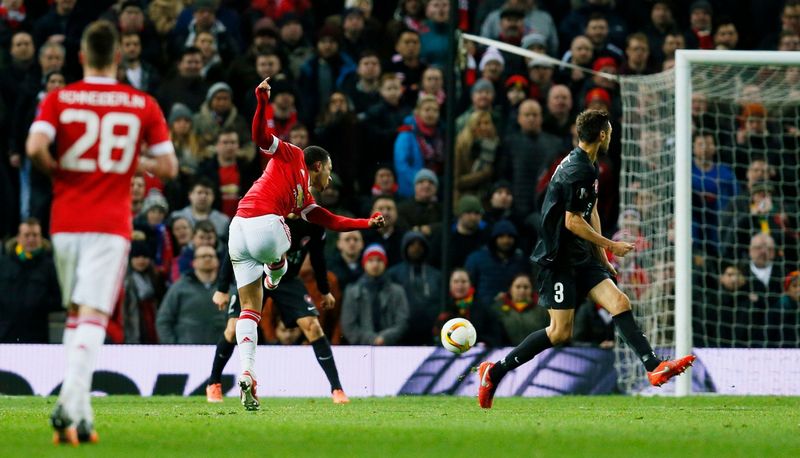 Memphis had tricked and teased his way down the left all night and he added the fifth late on, steering an accurate drive into the corner of the net after advancing with menace towards goal. Substitute Andreas Pereira came close to making it six and Regan Poole made his debut towards the end as this was a job well done by the Reds, who are safely into the hat for Friday's draw.

"It was a great performance and I think the fans will have enjoyed our attacking football. I believe they crossed the middle line for the first time when they scored. Normally you get a decline in confidence, but it was not like that as we scored, but missed a penalty – unbelievable! Still we kept going and going so I must give great compliment to my players because it is not so easy to do that." - Louis van Gaal

"Tonight was good and we enjoyed it out on the pitch. Everybody could see that. We are very happy to go through and we have to keep this spirit in the team as we move forward to Sunday." - Memphis

Young striker Marcus Rashford had a night to remember as he marked his debut with a brace that helped fire #MUFC into...