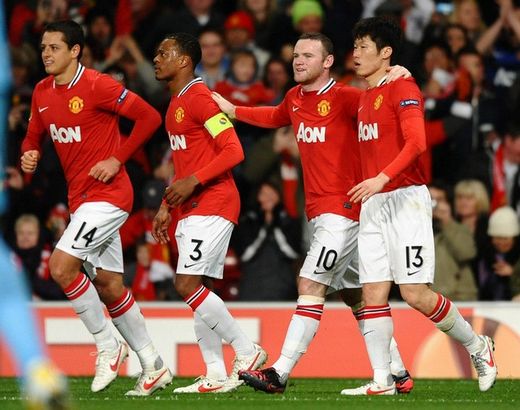 United face a real fight to stay in the Europa League after Athletic Club left Old Trafford more than a little shell-shocked by coming away with a 3-2 victory.

The Reds were largely outplayed for much of the 90 minutes despite taking the lead through Wayne Rooney, who also grabbed a late second which could turn out to be crucial. The visitors maintained their positive and attacking approach after going behind and duly got their rewards through goals from Fernando Llorente, Oscar de Marcos and Iker Muniain. It now means United have it all to do at the Estadio San Mames next Thursday.

Before the game, Sir Alex promised to field a strong team and he stuck to his word, although a handful of recent key performers, namely Rio Ferdinand, Michael Carrick, Nani and Danny Welbeck, were given an initial watching brief from the bench. In their place came Chris Smalling, wearing a protective hat after his head injury for England last week, Phil Jones, Ji-sung Park and Javier Hernandez.

Marcelo Bielsa and his Athletic Club players were never going to come to Old Trafford just to make up the numbers – they had made that pretty clear in the build-up to the game – and they showed in the opening five minutes that, despite never having won on English soil, a visit to Old Trafford held no fears. Not only were the visitors extremely organised, just as you’d expect for a team managed by the meticulous, almost obsessive, Bielsa, they were highly motivated from the off and flooded forward at every opportunity.

The focal point for most attacks was giant striker Fernando Llorente, he of 21 goals before kick-off, and it was the Spaniard who had the visitors’ first sight of goal on four minutes. The skilful front man twisted and turned on the edge of the box to create space before curling an effort just wide of David De Gea’s left-hand post.

Iker Muniain found himself within a whisker of latching onto a lovely ball over the top from Javi Martinez soon after, but thankfully the pass ran through to De Gea.

United took time to get going as an attacking force – a tame low drive from Hernandez, straight at goalkeeper Gorka Iraizoz, was pretty much all the Reds could muster in the opening 20 minutes. Indeed, Sir Alex’s men were being forced to play on the break as Athletic Club dominated proceedings.

But after surviving a couple of scares – the referee waved away Llorente’s penalty appeals after tangling with Smalling and Markel Susaeta shot straight at De Gea – the Reds took a somewhat surprise lead on 22 minutes. Hernandez played a neat one-two with Ryan Giggs before the Mexican fired low at Iraizoz who could only parry the ball into the path of the onrushing Rooney to blast home his 23rd goal of the campaign from six yards.

The goal did little to dent Athletic Club’s spirit and endeavour; in fact, the visitors appeared to grow in confidence as the openings in United’s half kept coming. Llorente headed over after a whipped cross from Oscar de Marcos down the right, before Susaeta was presented with a glorious chance just after the half-hour. Ander Herrera dinked a pass forward to Susaeta who burst clear of Jonny Evans but rather than take the ball on towards goal, he opted to lob De Gea and saw his effort drop wide.

Soon after, right-back Andoni Iraola did manage to test the Spanish keeper after a burst forward, but De Gea was equal to it and turned it round the post.

After countless warnings, the goal that had seemingly been coming for most of the first half arrived a minute before the break and it was no surprise to see Llorente get it. He played his part in some neat build-up before ghosting in unmarked to powerfully head Susaeta’s right-wing cross past De Gea.

There was no let-up in Athletic Club’s approach immediately after the restart with Llorente, a handful throughout, latching onto a blocked shot in the area before setting up de Marcos, under pressure from Jones, to fire over from 16 yards.

The Reds had De Gea to thank thereafter, not just for keeping them in this game, but arguably in the tie. First, the Spanish stopper, at full stretch, brilliantly tipped away Muniain’s 25-yard drive, before palming Llorente’s curling effort over the bar.

Possession-wise things were a little more even than the first period, and United had the fresh legs of Michael Carrick and Anderson who replaced Smalling and Park respectively, but it was Athletic Club rather than United who still looked the most likely to score more. And they so nearly did on 68 minutes when the impressive Muniain played a neat one-two with Herrera and found himself clean through. Once again De Gea came to United’s rescue with a smart save with his feet.

Unfortunately the Reds’ stopper was powerless to stop de Marcos giving Athletic Club the lead on 72 minutes. After an exchange of passes on the edge of United’s box, the ball came to Herrera who scooped the ball up for de Marcos to volley home left-footed into the far corner, although replays showed the midfielder was in an offside position.

De Gea saved again from substitute Gaizka Toquero, but after parrying de Marcos’ speculative effort on 90 minutes, he was unable to prevent Muniain, who had run in unmarked, blasting the rebound into the roof of the net for Athletic's third.

The tie looked to be all over but Rooney gave United a lifeline deep into injury-time from the penalty spot after de Marcos had handled Hernandez’s shot in the box. United still have it all to do, but there is at least some hope.

David De Gea
The goalkeeper could fill this ratings report on his own, after his outstanding performance gave United a glimmer of hope for the second leg. He made a variety of stops, not just trademark flying saves like the one from Iker Munaian early in the second half, but also some vital blocks.

Rafael
The Brazilian will surely bounce back from a tough night, and learn from the momentary switch-off that allowed Muniain to bag the killer third goal.

Chris Smalling
Eight days after his head injury with England, Smalling could have picked an easier opponent than Fernando Llorente. Beaten for a header that flew just wide on the half-hour mark, he slipped just before the big striker levelled the scores. He had to leave the field early in the second half when his Wembley wound re-opened.

Jonny Evans
Despite the scoreline, the centre-back was possibly United’s best outfield player, putting in some excellent changes and bringing the ball forward when he could. His only noticeable blemish was allowing Markel Susaeta to outpace him for a one-on-one in the first half; mercifully the midfielder missed the target.

Patrice Evra
Besieged early on as Athletic Club attacked down his flank, the skipper inadvertently played a major role in their third goal – he was penalised rather harshly for passing the ball without  his boot on.

Ashley Young
Starting on the right, he was one of United’s livelier threats in the first half when counter-attacking opportunities presented themselves. Tracked back well and had to -  but unlike in recent games for club and country, he couldn’t find the killer cross or goal.

Phil Jones
Ever-present in Europe this season, his selfless starting role in the engine room was geared to let Ryan Giggs push forward and thread balls into United’s front two. When Smalling got injured, however, he moved back into his more customary position for a difficult shift in central defence.

Ryan Giggs
Equalling Paolo Maldini’s record of 902 appearances for one club, he helped create the first goal by teeing up Javier Hernandez’s initial shot. There were other flashes of skill that just failed to pay off before he was withdrawn for the final 15 minutes.

Ji-sung Park
It was an uncharacteristically quiet night for the Korean, who was obliged to drop back and help out his under-pressure pal Patrice Evra. He consequently left the fray in the first unforced change and will hope to make more of an impact in his next game.

Wayne Rooney
The striker took his goal tally for the season to 24 with a poacher’s opener and a well-executed injury-time penalty – and he also went close when a free-kick whistled just wide. This wasn’t his finest hour as a playmaker, however, with some unusually errant passing.

Javier Hernandez
The Mexican assisted both goals for his attack partner, twisting inside for a left-foot strike that Iraizoz parried to Rooney and then winning the penalty late on when his cross-cum-shot was handled by De Marcos. But Chicharito didn’t test the keeper often enough for this to be one of his best nights under the floodlights at Old Trafford.

Michael Carrick (for Smalling, 55)
If Plan A was to rest the pivotal midfielder, then Plan B was brought hurriedly forward as the game began to ebb away from United. Carrick helped the Reds to regain a foothold in the tie and he’s almost certain to start the second leg.

Anderson (for Park, 61)
The Brazilian made a welcome return after a 10-match absence and showed enough to suggest he could be an asset to the Reds in the run-in.

Nani (for Giggs, 75)
The Portuguese tried hard to improve United’s penetration in the latter stages but unfortunately couldn’t fashion any clear-cut chances in his quarter-hour on the field.