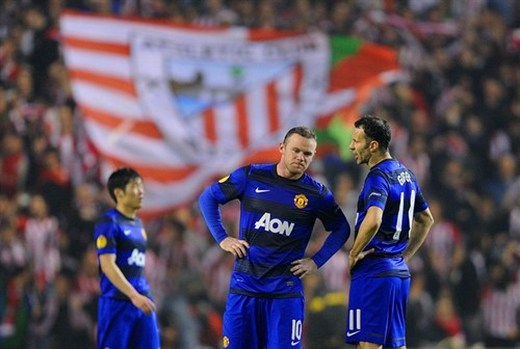 The quest for European glory is over for another season after United were unable to overturn a first-leg deficit against Athletic Club, who won 2-1 in Bilbao to earn a resounding 5-3 aggregate victory.

Having lost 3-2 at Old Trafford last week, the Reds' second-leg task was always going to be tough. The job was made all the more difficult when Fernando Llorente, such a handful in the first game, smashed home a stunning volley on 23 minutes.

The Basque side, seventh in La Liga, then produced a masterclass in possession and pressing and deservedly doubled their lead on the night when Oscar de Marcos beat David De Gea with a deflected shot in the 66th minute.

Wayne Rooney's wonder goal gave United a glimmer of hope for the final ten minutes, but in truth it was too little too late for the Reds. Sir Alex's men, outplayed over two legs by a side packed with talent and potential, were out of Europe and could have no complaints.

The manager had made three changes to the team that lost the first leg at Old Trafford. Rio Ferdinand replaced Chris Smalling in defence, while Michael Carrick and Tom Cleverley both came into the centre of midfield to play alongside Ryan Giggs, who was given licence to push forward and support Wayne Rooney in attack. Ashley Young and Ji-sung Park occupied the wide positions.

Marcelo Bielsa, meanwhile, made just one change to his Athletic side that left Old Trafford victorious last week: defender Fernando Amorebieta, suspended for the first leg, took the place of Mikel San Jose in the heart of defence.

Despite the fact it was United in need of goals - two of them, at least - it was Athletic, buoyed by a raucous home support, who made the early running with some quick, incisive passing and excellent movement in attack. The impressive Markel Susaeta, who had been one of the star performers seven days earlier, saw his deflected free-kick hit the side-netting on three minutes before another effort hit a United player and dropped kindly into the hands of David De Gea.

United kept Athletic on their toes on the break and goalkeeper Gorka Iraizoz had to be alert after nine minutes when neat interplay between Rooney and Cleverley led to a shot from Young that was bravely blocked by Javi Martinez.

The Reds breathed a sigh of relief soon afterwards when Llorente slid a pass through to the tricky Iker Muniain in the area and his low drive smacked against the post. De Marcos then fired the follow-up over the bar when it looked easier to score. You always felt that should Athletic net the opening goal the tie would be all but over. Unfortunately, that was exactly how things panned out.

After De Marcos had seen a shot saved by De Gea, a lovely cross-field pass over the top from Amorebieta was brilliantly volleyed home by Llorente into the far corner on 23 minutes. The home fans celebrated like it was a Champions League final-winning strike and it certainly felt like a clincher of some sort, with the Reds now needing to find three goals in order to qualify.

United weren’t about to give up despite the uphill fight and Giggs was unlucky to see a close-range header deflected over the bar after a cross from the left from Young five minutes later.

As the half wore on the Reds kept up the pressure but could find no way through a stubborn Athletic defence. The home side lost Llorente five minutes before the break to injury – the striker had been a doubt before the game – with Gaizka Toquero replacing him.

Athletic Club showed no signs of letting up after the restart, with de Marcos blasting a shot just wide. Right-back Andoni Iraola almost added a superb second soon after when, after being found on the edge of the area, he tricked his way past a cluster of Reds before clipping his shot just past De Gea’s left-hand post.

He then went close to turning provider in Athletic’s next attack when he burst down the right and crossed to the unmarked Toquero, but the substitute spurned the opportunity and blasted over.

The Reds were struggling to create any chances at the other end and, with another vital Barclays Premier League clash looming at Wolves on Sunday, Sir Alex opted to withdraw Rio Ferdinand and Michael Carrick. Chris Smalling and birthday boy Paul Pogba entered the fray.

No sooner had the substitutes come on, United went further behind as Athletic Club sealed their spot in the Europa League quarter-finals on 66 minutes. Iraola went on another marauding run down the right and although his cross was half-cleared by Smalling it fell to the feet of de Marcos, who brought the ball under control before blasting low past De Gea via a slight deflection off Jonny Evans. Cue more jubilant celebrations around the Estadio San Mames.

It nearly got worse for Sir Alex’s men when Susaeta screwed a shot just wide and Toquero headed over the bar. Instead, Rooney reduced the arrears with a consolation goal – a lovely curling effort from 25 yards that was sportingly applauded for its quality by the home fans.

No doubt Wayne would have traded a superb goal for a significant one as his effort couldn't alter the fact that United had been well beaten by the Bilbao club over two legs. Now Sir Alex will have to ensure there's no hangover for the pursuit of a 20th English title and that lessons are learned for next season's return to Europe.

David De Gea
An unhappy return to Spain, although he'll be pleased enough with his individual performance. No chance with either goal and made a handful of top second-half saves.

Rafael
The young Brazilian was given a torrid time by Iker Muniain, who looks one of Europe's top young prospects. A tough outing.

Jonny Evans
Often left exposed after United's full-backs had gone forward, Evans had to do a lot of "mopping up". A thankless task on an evening to forget for the Reds.

Rio Ferdinand
Gave up a yard of space for Athletic's opener but was otherwise solid enough at the heart of defence. Replaced midway through the second half after picking up a slight calf knock.

Patrice Evra
Pegged back by the lively Markel Suaseta for much of the game, Evra struggled to make his mark. A difficult day at the office for the Frenchman.

Ji-sung Park
Not even the South Korean, usually so effective at breaking up attacks, could stem the Athletic tide. Saw little of the ball in possession.

Michael Carrick
Competed well in the first half in midfield and intercepted several Athletic attacks. Tried to launch attacks from a deep position but his influence faded after the break.

Tom Cleverley
A disappointing first European campaign for the youngster, who was never given time on the ball to express himself or dictate the pace of the game.

Ryan Giggs
Produced a few lively moments from wide positions but, like United's other midfielders, was all too often harried out of possession. Received a standing ovation from the home fans when substituted.

Ashley Young
Looked confident from the first whistle and was unlucky to be denied early on by a fantastic covering tackle. His influence waned as the match wore on, however.

Wayne Rooney
Netted a cracking goal with 10 minutes to play to give the Reds a glimmer of hope but, in the main, endured a frustrating evening as a lone striker.

Paul Pogba (on for Carrick, 63)
Not the 19th birthday the Frenchman would have wished for. Sent on when Athletic had well and truly hit their stride, he struggled to impose himself. Booked for a rash tackle.

Danny Welbeck (on for Giggs, 68)
A quiet cameo, although he did test Athletic goalkeeper Gorka Iraizoz from distance with a dipping shot that bounced just in front of the stopper.