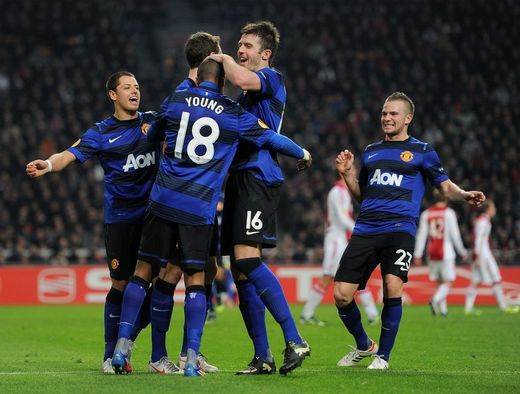 Manchester United have one foot in the Europa League round of 16 after goals from Ashley Young and Javier Hernandez in Amsterdam gave the Reds a 2-0 first-leg lead against Ajax.

But while Sir Alex's men will be confident of completing the job at Old Trafford next Thursday, nothing should be taken for granted. After all, this was no walk in the park.

Indeed, the Reds encountered stiff opposition in Ajax, themselves a club steeped in history and, like United, more accustomed to life in the Champions League. So it was no surprise that on Thursday night the four-times kings of Europe put aside poor recent domestic form to stand toe-to-toe with Sir Alex's men for almost an hour.

It was only in the 59th minute that Ashley Young broke the deadlock with a low, crisp finish that set the Reds on the way to what was Sir Alex Ferguson's first ever UEFA Cup win with Manchester United. And while it's not the European trophy supporters usually yearn for, the message from inside the Reds camp in the build-up to the game was clear: "We're in it to win it."

Sir Alex certainly picked a side he hoped would be strong enough to finish off the tie in the first leg. The spine was particularly robust, with starts for David De Gea, Rio Ferdinand, Michael Carrick and Wayne Rooney. There was also a much-anticipated return for midfielder Tom Cleverley, playing his first football since 29 October when he limped off against Everton at Goodison Park with an ankle injury.

Phil Jones and Nani, both of whom had missed United's last four fixtures were additional welcome returns, while Fabio was preferred at left-back with Patrice Evra left behind in Manchester.

Somewhat predictably, two teams with such rich footballing pedigree took time to size each other up. Short passing and an emphasis on keeping possession were key features in the game's opening stages; shots on targets and goalmouth action were not.

Indeed, it took until the 18th minute for either goalkeeper to be forced into making anything that even resembled a save, and even then it was unclear if Dico Koppers' tame effort was a shot or a cross.

Wayne Rooney's ambitious chip a minute later also proved easy pickings for Ajax stopper Kenneth Vermeer, who then showed great speed and courage to dart off his line and claim the ball at Javier Hernandez's feet. Rooney's clever pass had released the Mexican, but glimpses of Rooney's creativity were fleeting in the opening period, owning largely to Ajax midfielder Ismail Aissati.

It was Toby Alderweireld, though, who denied Wayne with a vital block just before the half-hour mark, less than a minute after Ajax had threatened themselves at the other end. Ferdinand did well to head clear a dangerous cross but the ball fell to Aissati, whose volley was cleared enroute to goal by Fabio.

If De Gea's first save of the night was simple, his second was sublime. Siem de Jong unleashed a bullet from 25 yards that looked destined for the top corner until the Spaniard threw himself to his left and tipped the ball around the post.

A mini aerial onslaught followed, during which Ajax slung cross after cross into the penalty area. Dmitri Bulykin headed one presentable chance over the bar but otherwise the Reds' rearguard stood firm.

De Gea's palms were then stung once more - this time rumoured United target Christian Eriksen was allowed space to advance from midfield - and Ferdinand escaped a strong penalty appeal on the stroke of half-time when he tangled with Miralem Sulejmani, as the home side grew in confidence.

The half-time break stunted Ajax's momentum and the Reds emerged sharpest, Nani drawing a fine save from Vermeer within 90 seconds of the restart before the goalkeeper again thwarted Hernandez at the striker's feet. The 26-year-old also had his own defenders trying to beat him: Alderweireld's header would have crept inside the post were it not for his diving intervention.

Vermeer was finally beaten just before the hour mark by Young, who collected Nani's low cross at the back post before calmly stepping inside one onrushing defender and firing the ball low and hard down the centre of the goal. It was Young's first United goal since his dramatic equaliser against FC Basel at Old Trafford back in late September and it delighted the thousands of travelling Reds who made the short trip to Amsterdam.

Celebrations were almost cut short when Eriksen skipped free of Jones on the halfway line on 73 minutes and made a beeline for goal. De Gea was again equal to the test, though, and beat away the Swede's stinging effort to preserve United's slender lead.

With five minutes to play, substitute Antonio Valencia surged forward and Hernandez combined well with Rooney before tucking away United's second with a cool finish underneath Vermeer.

The Dutch may not be used to mountains, but Frank de Boer's men now have a sizeable one to climb next Thursday at Old Trafford. It's advantage United after a job well done in Amsterdam.

David De Gea
An accomplished display which showed concentration and agility. Made a great diving save to thwart Siem de Jong and, after a lengthy spell of inactivity, beat away a Christian Eriksen drive. A couple of late stops ensured his first clean sheet since QPR in December.

Phil Jones
Always willing to get forward and as impressive as ever at right-back on his return to the team. Delivered several decent crosses and made a number of committed tackles and he'll provide the boss with options in a variety of positions.

Rio Ferdinand
Completely in control throughout, he read the game so well. Made intelligent interceptions all night and shrugged off a penalty appeal when he tangled with Miralem Sulejmani inside the box just before the break. Was left limping from that incident but returned to play flawlessly in the second period.

Jonny Evans
Composed and willing to join the attack, which is increasingly becoming a facet of his play. Growing in confidence and authority, he made an important headed clearance in the first half and continued to stride forward with purpose as he instigated attacks throughout.

Fabio
Picked up the first booking for a foul on Siem de Jong and survived a couple of nervous moments when Aras Ozbiliz caught him out in each half, the Ajax man hitting his cross wastefully to De Gea and then smashing over the top when Fabio was caught on the ball. However, he made some excellent interceptions and the positives of his play outweighed any negatives.

Nani
Looked rusty in the first half with his usual tricks failing to come off. After being wasteful with crossing opportunities, including one corner that drifted behind the goal, he was more like his old self after the break. Forced Kenneth Vermeer to push over the bar and his best cross also forced a stop out of the keeper after coming off a defender. A burst into the box set up Ashley Young's goal and he should've had a corner when his left-foot shot was tipped over by Vermeer.

Michael Carrick
Slick and imposing, his form is so consistent. A firm challenge drew whistles from the crowd but not from the referee and showed a willingness to make tackles when necessary. Got his head to a couple of corners but Ajax cleared the danger.

Tom Cleverley
A polished performance in his first game since October. A classy first-time ball to Wayne Rooney showed what United have been missing in his absence but he shot high and wide from a rare opening. Made a neat defensive interception before winning a free-kick and sent a fine ball into the area for Javier Hernandez before getting replaced on the hour mark.

Ashley Young
A first goal since September as he took his time when picking up Nani's cross and firing through Vermeer's legs. After a sloppy pass, he chased back to make a superb recovery tackle but seemed to have some trouble keeping his footing at times. A great dummy in the second half showed his skill when a corner came back to him and he felt he was fouled by Jan Vertonghen when racing through on goal but no free-kick was awarded.

Wayne Rooney
A scooped shot was easy for Kenneth Vermeer in the first half and he was unable to add to his record of four goals in the last two games. Played some nice passes to Chicharito but slipped while trying an outlandish shot and blasted over the bar towards the end. Grabbed an assist for his part in Hernandez's goal.

Javier Hernandez
Was wrongly called offside after one early run and Vermeer came out bravely at his feet to halt the Mexican. Collected a Rooney pass expertly in the second half but there was no penalty despite a challenge from Vurnon Anita. Will be delighted to get on the scoresheet late on after trading passes with Rooney and seeing his shot go in off Vermeer.

Paul Scholes (for Cleverley, 60')
Composed after being introduced and kept things ticking along nicely.

Antonio Valencia (for Young, 76')
Made a telling contribution when setting up Rooney in the build-up to the second goal but he was injured in the process and faces four weeks on the sidelines.

Danny Welbeck (for Valencia, 86')
No time to make his mark.