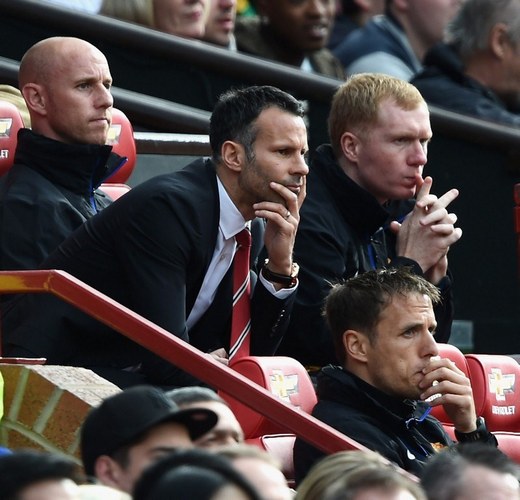 Ryan Giggs, Nicky Butt, Phil Neville and Paul Scholes came through the ranks together and were tutored by Harrison, who helped shape them as footballers and characters. Each of the quartet had their name yelled by the Stretford End during Giggs' first game in interim charge on Saturday, a 4-0 victory against Norwich City.

"I think really that they are like brothers. They are very, very close to each other."
- Eric Harrison on Giggs, Butt, Neville and Scholes

Although Giggs is the boss, Harrison says he will be leaning on his pals for advice as United approach the final three games of a difficult season.

"I think really that they are like brothers," explained Harrison to MUTV. "They are very, very close to each other. They have all got their coaching badges, you have got to remember that, as they wouldn't be able to do it otherwise.

"Ryan really talks to them. If Butt says something, Ryan will say: 'Yes, you have your say' and all that business. It's not just Ryan Giggs [on his own]." Harrison says Giggs' appointment made sense as he is so well respected within the club.

"My first thought was this can't be true but now I'm absolutely delighted," he enthused. "I think he has been a very good appointment.

"When I worked with him, he just took everything in. Nothing went in one ear and out of the other. He's a very sensible lad and, to be honest, a legend as well. The crowd and players love him and he's a great player.

"Every manager is under pressure and the buck stops with him. Hopefully he can get through that and get a winning mentality with all the players, which is important."