De Gea: I am next to a football legend 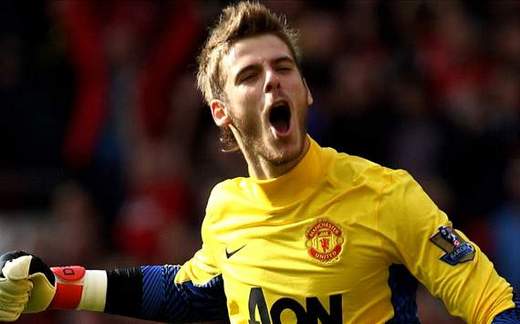 However, the Spaniard's performances have improved considerably in recent weeks, and De Gea says he is happy with his contribution.

"Honestly, I think I have done more good things than bad things, but perhaps what I have done wrong has been reported on more," De Gea told AS.

"I have done very good things. I am happy with my performances to date and I am sure there is more coming.

"Of course I am self-critical. I have to be. Any footballer must learn from his mistakes to improve day after day and know what his weaknesses are."

"I see Giggs improve every day. I tell him: 'I am next to a football legend'.

The 21-year-old endured a shaky start to life at the English Premier League club after signing from Atletico Madrid as a replacement for the retiring Edwin van der Sar.

De Gea also brushed aside suggestions that his problems stemmed from undergoing corrective eye surgery last summer to fix an issue which affects the long-range vision.

"I do not care if my critics say that this problem affects me," he added. "I imagine that many footballers suffer from the same problem and that is why there are contact lenses."

The Spain Under-21 international went on to reveal that he is over the moon to have been given the chance to play for the Red Devils.

"Every morning when I enter the dressing room and I see [Ryan] Giggs and [Paul] Scholes is like I am dreaming," De Gea explained. "It is a huge source of pride.

"I see Giggs improve every day. I tell him: 'I am next to a football legend'.

"I am proud to play alongside them. Wayne Rooney is also a very good guy and a tremendous player.

"I have a good relationship with most of the players, but especially with those who speak Spanish: 'Chicharito' [Javier Hernandez], [Antonio] Valencia and Nani."