September 4, 2014
Posted by Steven Tan | Source from The Telegraph 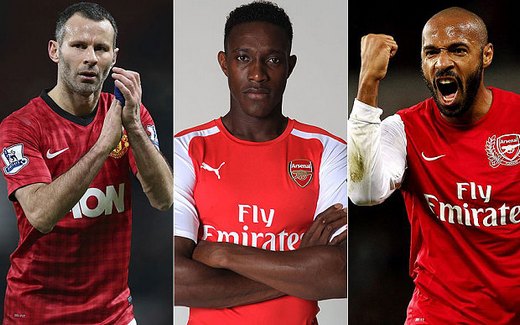 After spending 15 years at Manchester United, Welbeck was sold for £16 million on Monday to Arsenal, where he will get the chance to follow in the footsteps of Henry as the club’s main striker.

“I loved watching Thierry Henry since I was a little kid,” said Welbeck. “My two idols are Ryan Giggs and Thierry Henry so to come to the club where he was and had so much success at is something you can look up to and try to stamp your own print on the club.”

Having been nurtured by Sir Alex Ferguson, Welbeck also described Wenger as one of the “legendary” managers of football.

“I know a lot about Arsenal,” he said. “I don't think there are many people in England who won't know about Arsenal and what a big club this is. The stadium is fantastic and [the team] has got a legendary manager and magnificent players who have also been brought in. I know the England lads from the camp.

“I met Calum Chambers for the first time [on Monday]. All they have said to me are good words about the club and how big the family is in and around the training ground. It seems like a family club and that's something that's really enticing. I'm so glad to be here.

“There's definitely competition and I think once you come to a big club, there is always going to be competition. Unfortunately there are a couple of injuries at the moment but I think once everyone is fighting fit, everybody will want to be on the pitch scoring goals and that's healthy competition for the squad.”

Welbeck adds to an English core at Arsenal that already includes Chambers, Jack Wilshere, Kieran Gibbs, Alex Oxalde-Chamberlain and Theo Walcott. He believes that it is something that will be beneficial for both club and country.

“It's going to be a massive positive for us,” he said. “We'll be seeing each other every single day and you obviously develop a much better understanding if you're working with one another on a consistent basis. That's something that will definitely benefit the England team.”

Welbeck also had a message for Arsenal’s fans. “I just want them to know that I will give 100 per cent in every single game,” he said. “I play with my heart on my sleeve and I'm always going to give my best. I'll try to give them so many happy days in the coming future.”