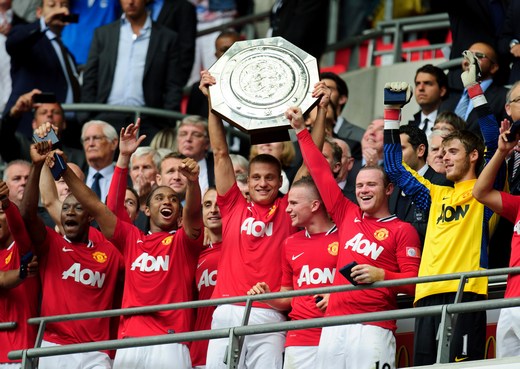 In the space of six second-half minutes, goals from Chris Smalling and Nani turned around a two-goal deficit and seized back the momentum Manchester City had stolen at the end of the first period. Then, with the match in the fourth minute of injury time and seemingly poised for penalties, Nani charged down a Vincent Kompany clearance on the halfway line, sprinted clear, rounded Joe Hart in the City goal and slid the ball home to clinch the season's first piece of silverware.

Many had written United off by half-time after goals from Joleon Lescott and Edin Dzeko – albeit against the run of play – had given the Blues what looked to be an unassailable lead. But changes at the break, including the introduction of debutants Phil Jones and Tom Cleverley, prompted a United fightback that epitomised the strength of character Sir Alex so often speaks of.

The Reds began brightly at Wembley, barely allowing City a kick for the first five minutes and going close when Smalling volleyed goalwards amid a mini melee inside the Blues' penalty area. The young defender, usually deployed as a centre-back, enjoyed plenty of freedom down the right flank and delivered a number of dangerous crosses.

There was little evidence early on of charitable spirit in this Community Shield clash, as players from both teams flew into tackles on a surface made slippery by a heavy dose of rain just after kick-off. Nemanja Vidic and Mario Balotelli squared up to each other for the briefest of moments before Edin Dzeko and Anderson both earned bookings after they were involved in a shoving match following a late challenge by the Bosnian.

Barely a minute later, Micah Richards lunged in on Ashley Young and was perhaps lucky to escape with only a yellow card. Wayne Rooney couldn't inflict further punishment; his free-kick whizzed just over the crossbar.

Welbeck and Nani then combined to unlock the City defence, although Welbeck's final ball across goal was cut out by a Blues defender. The young striker then headed tamely into Joe Hart's arms as United looked to turn early dominance into goals.

A number of niggly fouls disrupted the game's flow around the half-hour mark and fuelled the already hot atmosphere inside the stadium. One infringement resulted in a United free-kick 30 yards from goal, which almost made its way into the bottom corner via a deflection off the end of the Blues' wall. Another handed City the lead on 38 minutes.

It was David Silva's teasing left-footed delivery from the right wing that did the damage. It curled over Vidic but in front of Rio Ferdinand, into an area where Joleon Lescott soared high to head past David De Gea from six yards.

The Spanish goalkeeper's debut got worse in first-half injury time when a dipping Dzeko shot from distance deceived the 20-year-old and doubled City's lead. The ball was struck with some venom, but it was its late movement in the air that caught the former Atletico Madrid man by surprise.

So, after a bright start and plenty of early promise, Sir Alex's men found themselves, somewhat harshly, two goals behind at the break. The boss responded by making three changes – Phil Jones and Jonny Evans came on for Ferdinand and Vidic, Tom Cleverley replaced Carrick – and within 13 minutes the Reds were level.

bought from Aston Villa in the summer and renowned for his dead-ball prowess, that sent a curling ball into a packed penalty area. When it arrived five yards from goal, Smalling was on hand to volley past Hart and reduce the deficit.

Six minutes later, Nani dinked a delightful finish over Hart to cap a passing move that was as easy on the eye as it was devastatingly effective. Indeed, the Reds will do well to score a better team goal this season.

Nani started the move by passing crisply to Rooney on the edge of the box and continuing his run into the penalty area. Wayne moved the ball on to Cleverley with a cheeky backheel and he, eyeing Nani's run, laid the ball sideways for the Portuguese to collect in his stride and chip past the advancing Hart.

De Gea did well to keep out a rasping drive from City substitute Adam Johnson on 76 minutes, while Cleverley whistled a shot just over the bar at the other end. With three minutes to play the Spanish goalkeeper shot up an arm to repel a close-range Micah Richards header, although the goal wouldn't have counted anyway: referee Phil Dowd had already blown his whistle for a foul inside the area.

The Reds then blew two late chances to win the game before Nani stole the show in dramatic fashion and saved everybody the pain of penalty kicks. It seems winning's a hard habit to shake...