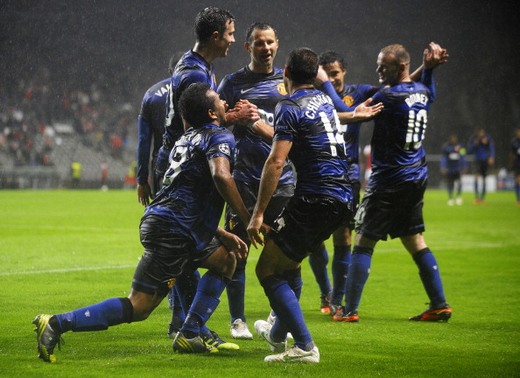 Robin van Persie’s smartly-taken leveller, Wayne Rooney’s penalty conversion and a close-range finish from Chicharito gave the Reds a fourth straight Group H victory, after Alan’s spot-kick early in the second period had given the hosts a deserved lead.

The Reds’ late rally came completely without warning in a game unexpectedly enlivened by a 10-minute stoppage for floodlight failure. Home goalkeeper Beto had been troubled more by the teeming rain than by the visitors for 80 minutes, while David De Gea, conversely, needed to make three sharp saves and was also rescued by his woodwork.

A rejigged United side had looked out of sorts for long periods amid taxing conditions. Chris Smalling made his first outing of the season, named alongside Jonny Evans from the off, with Rio Ferdinand dropping to the bench. Rafael joined Ferdinand in reserve as Antonio Valencia started at right-back.

The changes continued throughout the team, with Robin van Persie, Michael Carrick and Tom Cleverley all named as substitutes as Sir Alex Ferguson opted to field Ryan Giggs and Anderson in midfield, with Wayne Rooney dropping off lone striker Chicharito and flanked by Nani and Danny Welbeck. 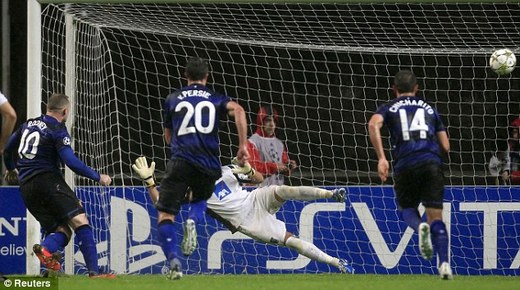 There was a disjointed look about United’s opening, while Braga began with greater cohesion at both ends of the field. While there was no repeat of the lightning start the Portuguese side made at Old Trafford, it took just six minutes for Eder to break through the Reds' lines and drag an ambitious low effort off target.

Chicharito and Smalling both required treatment after suffering knocks to the head, and Ruben Micael almost took advantage of the latter’s absence but could only volley wastefully over from Alan’s inviting cross.

A minute later, midway through the first period, Eder thudded a diving header against the base of De Gea’s post with the half’s outstanding effort. United mustered little in response, with swift attacks undone by loose passing and more considered plays fizzling out as Braga defended in numbers.

Alan’s low shot was well held by De Gea as it skidded off the rain-slicked turf, but thereafter United largely contained the hosts in comfort. For the lack of penetration on show up top, the defensive diligence of Rooney and Giggs provided a vital shield for the Reds’ rotated backline.

Nevertheless, the arrival of half-time brought the chance for players and backroom staff to dissect a lacklustre first period. Yet, the hosts needed just three minutes of the second half in which to secure a golden opening. As United failed to clear the ball, Custodio charged into  the area and crashed into Evans. A probable obstruction had it occurred outside the area, yet referee Felix Brych deemed the offence sufficient to award a penalty.

Following on from his brace at Old Trafford, skipper Alan comfortably roofed his kick from 12 yards to send the Estadio Axa wild. Shortly afterwards, the pitch was plunged into darkness as floodlight failure caused a 10-minute delay in play. When the game resumed, Rio Ferdinand was immediately introduced in place of Evans.

Still there was little zip or threat about United’s game, with Braga comfortably protecting their lead and almost adding to it when De Gea produced a fine double save to fend away Nuno Andre Coelho’s free-kick and Micael’s follow-up. In a bid to grasp control of the game, Sir Alex introduced van Persie in place of Welbeck, and subsequently Rafael for the limping Nani.

United’s forward forays increasingly grew in promise, but all too often the final ball was comfortably caught by Beto. Perhaps through underemployment, the Braga stopper cost his side the lead with an inexplicable rush of blood with 10 minutes remaining.

Giggs’ through-ball was perfectly measured for van Persie’s run, yet Beto needlessly charged from his line to try and reach it, changed his mind and then watched on helplessly as the Dutchman bent a superb early finish into the unguarded goal.

United had levelled from nothing and against the run of play, and were incredibly ahead just four minutes later. After Chicharito’s shot had been saved by Beto, Rooney was felled by Coelho and, after consulting his assistants, referee Brych awarded the kick. Rooney duly smashed it home to put United’s travelling support into rapture. 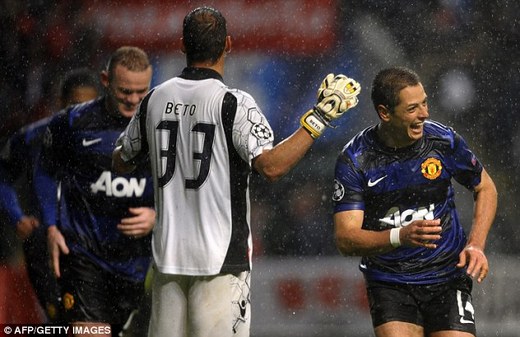 Braga were spent and immediately looked susceptible to late counter-raids, which transpired in injury time as Chicharito was found by Rooney’s neat flick. Though he needed to fashion time and space before having a shot blocked on the line, the little Mexican slid in to put the ball into the roof of the net. A decisive victory had been wrapped up and with it comes progress to the last 16 of the Champions League, as group winners, with two games to spare.