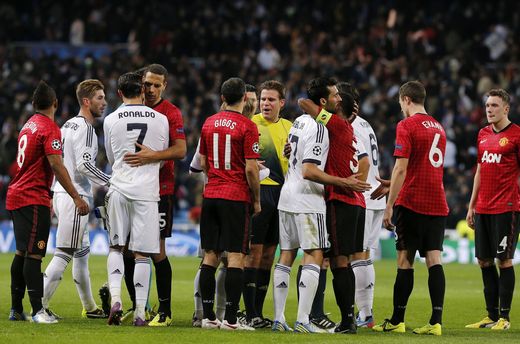 It's advantage Manchester United at half-time in this captivating Champions League tie with Real Madrid after the Reds scored a priceless away goal at the Bernabeu.

Danny Welbeck netted with a great header from Wayne Rooney's left-wing corner to give Sir Alex Ferguson's men a dream start, and although former team-mate Cristiano Ronaldo equalised for the Spanish giants, this was still a job very well done for the visitors under extreme pressure.

Welbeck's inclusion was perhaps Sir Alex's surprise card given Robin van Persie and Wayne Rooney also started, with Shinji Kagawa in the mix as well. Phil Jones and Michael Carrick screened the back four in which Jonny Evans was given the nod over Nemanja Vidic alongside Rio Ferdinand.

Many wondered whether Real would go at United from the off. The answer was a resounding yes. After Sami Khedira dragged a shot wide on two minutes, Angel Di Maria escaped the attentions of Patrice Evra and flashed a 20-yard effort just wide of David De Gea’s right-hand post.

The Spanish stopper was the hero soon afterwards with a superb fingertip save as he turned Fabio Coentrao’s curling drive onto the post after good work by Ronaldo down the left. Raphael Varane then headed over from a free-kick before Mesut Ozil was allowed to run clear to the edge of the area. Michael Carrick came to the rescue with a fantastic  block as Ozil took aim. 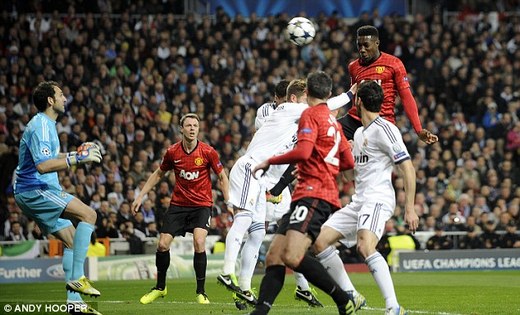 It was an onslaught of epic preportions, with Ronaldo, Di Maria and Ozil at the heart of it, but having rode their luck at one end, United opened the scoring at the other on 20 minutes. A Rooney corner from the left was met perfectly by Welbeck, who rose above Sergio Ramos to head past Diego Lopez. Cue wild celebrations high in the end behind that very goal where more than 4,000 travelling Reds were stationed.

Madrid weren’t about to let the goal put them off course, though, and Mourinho’s men continued their charge towards United’s goal. And 10 minutes after going behind, parity was restored. Of course, it had to be Ronaldo. After Di Maria had stung the palms of De Gea and Ronaldo had flashed a low drive just wide, the pair combined to draw Madrid level. It was Di Maria who supplied the cross from the left, which Ronaldo duly headed home after hanging brilliantly above Patrice Evra. The former Red kept his celebrations low-key as the Bernabeu exploded with noise. 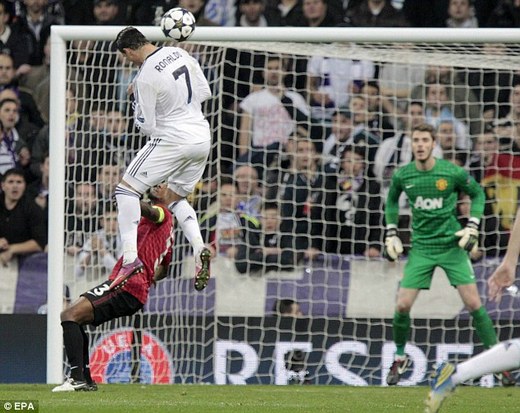 On rare ventures forward, the Reds still posed a strong threat in attack, with van Persie and Welbeck looking particularly sharp. The duo almost conjured up a second United goal on 34 minutes as Welbeck saw his poked effort from van Persie’s cross bounce off Lopez’s back and drop just wide of the far post. Rooney dragged a low shot just wide from the resulting corner.

Madrid continued to keep De Gea on his toes and the Spaniard produced an excellent parry from Ozil after a dream pass from Xabi Alonso over the top. A breath-taking first half offered up one final chance when Ronaldo, who had given Rafael a torrid time throughout the opening period, took aim from 25 yards. Thankfully, it flew just over.

Having survived the first half blitz from Madrid it was the visitors who had the first sight of goal after the restart, with Phil Jones heading over from a corner. It wasn’t long before De Gea was called into action again, though, as he ably dealt with strikes from Ronaldo and Di Maria. He breathed a sigh of relief when another Di Maria effort dropped inches wide of the post with De Gea rooted to the spot.

To say Madrid had got the rub of the green with some of the decisions in the game up to that point was an understatement and only referee Felix Brych knows why Varane was not punished and United were not even given a free-kick when the Madrid defender clearly fouled Evra as he raced towards goal with acres of green to run into not long before the hour mark.

Seconds after Gonzalo Higuain had replaced Karim Benzema, De Gea spectacularly saved with his feet after Coentrao had skidded in at the far post to meet Khedira’s dangerous centre. There was certainly no let-up in the pace of the game as both sides took the ‘you attack, we attack’ approach. Sir Alex saw fit to tighten things up and introduced some experienced legs in the shape of Ryan Giggs, on for Kagawa  on 63 minutes. The veteran was afforded a sporting welcome by the home fans and slotted in on the left with Welbeck dropping in behind van Persie.

Ronaldo almost grabbed a second as he slid in at the near post to meet Di Maria’s right-wing cross, but Ferdinand managed to deflect his former team-mate’s attempt away for a corner. Seconds later, van Persie was denied twice in agonising fashion. After seeing his right-foot drive pushed onto the bar by Lopez, he failed to connect properly with a looped pass from Carrick that put him clear on goal. Mind you, his shot would still have gone in had it not been for Alonso’s last-ditch clearance off the line.

The chances kept coming at the other end – some pinball in the box eventually led to De Gea being alert to claim Khedira’s deflected effort 10 minutes from the end. Ronaldo blasted a trademark free-kick onto the roof of the net and then, in injury time, van Persie almost snatched victory for the Reds with a shot well saved by Lopez. Nonetheless, this 1-1 draw was still a great result for Sir Alex’s men and it sets up a tantalising second leg at Old Trafford on 5 March.