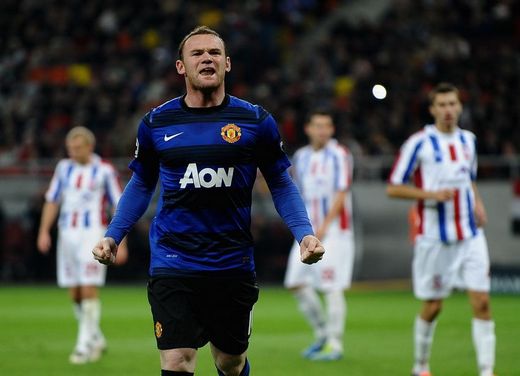 Both Rooney's first goal and the skipper's dismissal came just after the hour mark as the Reds critically upped the ante after an uninspiring first period at the impressive National Arena in Bucharest. There wasn't a huge improvement in the second half but the English champions did just enough to claim a first win in this Group C campaign and inflict a third slender defeat on the Romanian hosts.

Sir Alex Ferguson's eleven showed nine changes from the side that started at Anfield, retaining only Patrice Evra and, moving from right- to centre-back, Chris Smalling. Nemanja Vidic made his first appearance for the Reds since the opening league win at West Brom, and behind him Anders Lindegaard came in for his third start in goal this term, having impressed on the previous European trip to Benfica.

United's hosts - with their record-signing centre-back Milan Perendija reportedly costing just £85,000 - were massively underdogs, despite only losing by the odd goal in their first ever games in the Champions League group stage - to Basel (1-2 away) and Benfica (0-1 home), the two sides who limited the Reds to just two points prior to this excursion into the unknown in Romania.

As expected, Galati conceded the lion’s share of possession to the English champions but they were comfortable behind the ball for the first 20 minutes. In fact, it was the Romanians who drew first blood in terms of shooting opportunities, the first gifted by the Reds’ rusty skipper Vidic to lone striker Bratislav Punosevac. The latter failed to pack sufficient power into his effort to concern Lindegaard and his second strike, from a similar spot just outside the box, found the same fate – straight into the Dane’s hands. United’s keeper almost contrived to create a third chance in a row for the Romanians when his careless clearance cannoned back off his captain but the Reds survived the scare.

Failing to clear their lines from a free-kick almost cost United’s rearguard dear when defensive midfielder Iaon Filip strode forward to fire a shot just over Lindegaard’s bar. But this latest in a handful of half-chances was hardly reflective of the overall play, with United dominant in midfield where Rooney dropped in to join Anderson and Carrick in patiently trying to pick a way through the massed ranks of white shirts. However, Carrick’s most important early contribution - on his third consecutive start in the Champions League – was to throw his body in the way of Ionut Neagu’s effort.

Rooney went closest to a first-half breakthrough when his free-kick, not dissimilar to Steven Gerrard’s at Anfield, crept through the wall and was scrambled away less than convincingly by Branko Grahovac. The Galati goalkeeper made a better save from a better shot, unleashed by Patrice Evra on a typical burst down the left flank. The Bosnian shot-stopper also blocked a right-foot strike from Nani, moments after watching Carrick spurn United's best opening of the half by sidefooting Nani's pull-back over the bar. The frame at the other end was also cleared vertically, by Liviu Antal's header just before the break, from the only corner of a disappointing first half. The absence of injury time was a blessing.

United’s bid to raise the tempo at the start of the second half was met with some rough-house tactics from the Romanians with Nani on the receiving end of two fouls by right-back Cornel Rapa, the second of which was punished by a yellow card. Perendija was also cautioned for going through the back of Rooney but the Reds weren’t angels either, with Carrick entering the book for a clumsy challenge on Antal. Neagu continued the flurry of cards when he cynically took Nani out as the Portuguese winger tried a spot of ball-juggling in midfield.

Undeterred, Nani teed up Rooney for a shot on the turn that just whistled past the left-hand post and fed the same team-mate again in the move that finally made the breakthrough in the 64th minute. When Wayne’s attempt to find Hernandez unmarked on the other side of the box was thwarted by Sergiu Costin’s blatant handball, the striker stepped up to sidefoot home the resulting penalty with Grahovac diving the wrong way, right.

If Costin was lucky to escape with a yellow card – Galati’s fourth – then Vidic was very unfortunate to see red when he caught Gabriel Giurgiu with a raised right boot. The shock on the Serbian’s face was plain to see but away he trooped, to leave ten men facing fired-up Galati who might have equalised had Carrick not blocked Antal’s venomous volley. Moments later Sir Alex sent on Jonny Evans to play alongside Smalling, with Antonio Valencia sacrificed. A further change followed at the back with Phil Jones coming on for Fabio who’d earlier been treated after an awkward fall.

Nani nearly made it 2-0 with a free-kick saved by Grahovac, after Giurgiu was booked for a foul on Chicharito, but Punosevac was off-target at the other end - just - having connected first time with Filip's cross. Nani tried again with the clock just shy of 90 minutes but this time his shot struck the right-hand post, this coming moments after Perendija's second yellow card - for another foul on Chicharito - evened up the personnel.

Rooney's second penalty, after the striker himself was tripped in the box by Antal, made the points absolutely safe and took some of the pressure off the Reds with the Galati home game coming next in this campaign.

Anders Lindegaard
Little for the Dane to do on a cold night in Bucharest but dealt with most tests convincingly.

Fabio
Not much came down United's right, so the Brazilian enjoyed a relatively quiet outing. A knock after half-time hampered his ability to contribute further up the pitch.

Nemanja Vidic
Sent off for a clumsy challenge that should surely only have warranted a caution. Otherwise, a solid enough comeback, although made an early error due to rustiness.

Chris Smalling
Back in his preferred position, Smalling was typically solid, looked comfortable and took few risks with his passing.

Patrice Evra
Linked well with Nani in the first half and had a fierce shot saved down by the near post. Took over the armband after Vida's departure.

Antonio Valencia
Saw plenty of the ball early on but didn't always take on his man or successfully deliver into the penalty area. Sacrificed for Evans after Vidic was sent off.

Michael Carrick
A brave block at one end was followed by a poor miss at the other in a first half in which he was one of the brighter sparks. Filled in at centre-back briefly after Vidic was dismissed.

Anderson
Looked lively early and late but faded in the middle and, like many of his team-mates, failed to provide cutting-edge in the final third or consistent service to the frontmen.

Nani
United's most menacing attacker in the first period, Nani tried his best to conjure some magic but couldn't quite produce. Hit the post late on with a long-range effort.

Wayne Rooney
Nothing - shots nor passes - seemed to come off for Rooney in Bucharest until he won and converted both United's penalties. After a performance far from his best, he finished with a brace.

Javier Hernandez
Few clear chances fell the Mexican's way on a night where he received little to no service for long periods. A frustrating night for the forward.

Jonny Evans (on for Valencia)
Called into action on short notice but wasn't fazed. Calm in possession and put the boot in where necessary.

Phil Jones (on for Fabio)
Came on at right back for the injured Fabio and, like Evans, looked immediately at home. Not seriously tested.