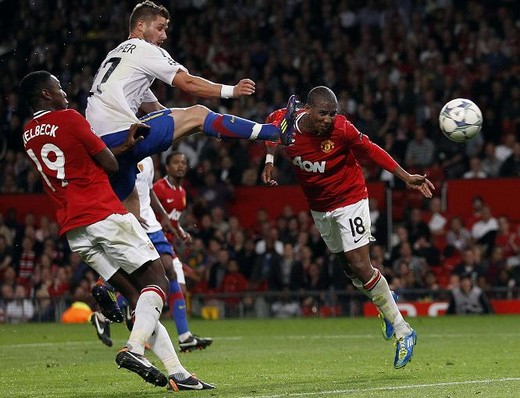 Two quick-fire braces in either half – United's in the first, Basel's in the second – lit up an entertaining encounter at Old Trafford that swung both ways before eventually ending even thanks to a 90th-minute Ashley Young equaliser.

When Danny Welbeck sent United 2-0 up after just 17 minutes, United looked to be cruising. But as Basel stayed true to their footballing principles, attacked in numbers and pressed the Reds high up the pitch, they created chances and, with 14 minutes to play, had taken three of them.

That sent United in search of a late equaliser and, in the 90th minute, Young arrived at the far post to head home substitute Nani's cross and rescue a valuable point.

Sir Alex was visibly relieved to have snatched a draw at the final whistle, and yet the Reds had been two goals to the good with barely a quarter-of-an-hour on the clock. That said, the warning signs had been there. Basel even fashioned the first chance of the game. Midfielder Fabian Frei found space beyond Rio Ferdinand and Phil Jones but blazed over from 18 yards when clean through after only five minutes.

Young then provided Antonio Valencia with a gift as inviting as a box of Swiss chocolates when he twisted and turned on the left flank before curling a sumptuous ball to the back post. The Ecuadorian's header, from all of two yards, flashed agonisingly across the face of goal.

Basel custodian Yann Sommer then did well to hold Young's firm volley, hit into the ground, before Welbeck netted the first of his double on 16 minutes. It wasn't the prettiest goal Welbeck, or United, will score this season. But they all count and Danny's scuffed shot from 12 yards, which appeared to dribble goalwards in slow-motion before spinning in off the post, was just reward for a bright start.

A minute later it was 2-0. Giggs, who'd calmly laid the ball back to Welbeck for the opener, provided a rather more incisive pass this time. Collecting the ball in the inside left channel about 30 yards from goal, the Welshman advanced briefly before looking up and picking out Welbeck with a low cross that succeeded in cutting out two Basel defenders and leaving Danny with a simple side-footed finish at the back post. Basel boss Thorsten Fink will have been furious with the defending, but Giggs, in his 750th United start, showed his worth once more on the European stage.

To their credit, Basel kept plugging away and both Alexander Frei and Jacques Zoua wasted presentable chances to reduce the deficit before the interval. Neither manager made changes at half-time and both sides flew out of the traps. Young had the ball in the net after a matter of minutes but was correctly ruled offside, while Phil Jones and then David De Gea had to be at their sharpest to repel big Basel forward Marco Streller.

De Gea's denial – an instinctive save from close range with an outstretched leg – was most impressive and further showcased the supreme shot-stopping ability the Spaniard has displayed in recent weeks.

There was little he could do about Basel's opener, though. Indeed, the stopper made a smart save to get down to Streller's near-post header from a corner on the right wing. But when the ball bounced out to Fabian Frei the 22-year-old lashed it home from 12 yards to send the travelling fans wild.

They were cheering again two minutes later when Basel's other Frei, Alexander, found himself unmarked in the penalty area and with plenty of time to calmly nod Fabian's curling centre back across goal and into the net.

Suddenly Basel were level. In truth, they had never really looked beaten, even at 2-0 down. The Swiss side had played without fear – a rare trait in visiting teams at Old Trafford – and they were rewarded yet further on 75 minutes when referee Paolo Tagliavento pointed to the spot after Valencia tangled clumsily with Streller. Alexander Frei stepped up and buried the kick to send Basel in front, but this is Manchester United and drama lurks around every corner.

True enough, after probing and prodding for what seemed an age, the Reds broke through, Ashley Young heading in at the far post with only seconds of normal time to spare. United had earned a dramatic point.

David De Gea
Conceded three goals but wasn't at fault for any of them. Indeed, made a few impressive stops on his United Champions League debut, including one instinctive reflex save with his right foot.

Fabio
Surged forward well and played a key role in Danny Welbeck's first goal but not all of his passes found their man. The young Brazilian was solid enough, though, before limping off injured after 70 minutes.

Rio Ferdinand
The Reds' most experienced defender found Marco Streller a real handful and was also kept on his toes by Basel's forward-running midfielders. An unusually tough shift at the office.

Phil Jones
The youngster broke forward well in possession but the partnership with Rio never truly looked solid. Tackled well enough but was involved in the confusion that led to Basel's penalty.

Patrice Evra
The Frenchman's attacking threat remains potent and he whipped over some dangerous crosses in the first half. He was caught upfield once or twice by Basel's swift counter-attacks, though.

Antonio Valencia
Missed two close-range chances - one he headed wide, the other drew a smart save from Yann Sommer - in the first half but caused Basel plenty of problems before giving away the penalty for Basel’s third goal.

Anderson
Some of the Brazilian's early passing was sublime, and he tackled well, too. But like so many of his team-mates, Anderson's impact dipped dramatically in the second half. Still one of the Reds' best, though.Michael Carrick Got stuck in early on and made some important interceptions and tackles. Retained possession well and allowed Anderson freedom to join United's forward forays in the first half.

Ashley Young
Took to Champions League football like a duck to water. Crossed terrifically in the first period and had the ball in the net from an offside position soon after the restart. Saved his best until the 90th minute, though, with a late equaliser.

Ryan Giggs
Relished his “in the hole” role on his 750th start and after whetting his appetite with assists for Welbeck’s two early goals, he tried his own luck with a shot deflected just over the bar.

Danny Welbeck
His first start for a month and he capped it with a quick-fire double. Both first-time finishes were into the same bottom corner, one scuffed with the left foot, the other slotted with his right. Individual joy mixed with team disappointment.

Nani (on for Fabio, 70)
Provided an attacking threat off the bench and crossed for Young's late equaliser.

Ji-sung Park (on for Giggs, 61)
Never really stamped his authority on the game, but admittedly came into the game at a very difficult time.

Dimitar Berbatov (on for Anderson, 82)
Would have liked a longer run-out but was involved for long enough to blast a late shot into the side-netting. Perhaps should have squared for Nani.