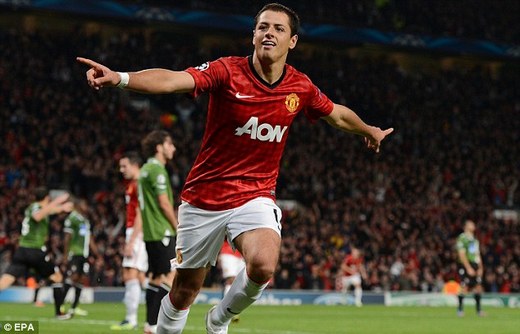 United are having to make a habit of coming behind to win matches but, even by this season's standards, it was pretty stirring stuff to recover against an accomplished SC Braga side at Old Trafford.

Alan's double within 20 minutes stunned the home crowd and ensured the men from Manchester had fallen behind in eight of the 12 fixtures this term. However, the two-goal lead was eventually overturned on a European night containing much excitement for the 73,195 fans in attendance.

Javier Hernandez pulled one back with a header and nodded the 75th-minute winner after Jonny Evans poked in the equaliser from a corner. The Mexican striker looked back to his clinical best which could be bad news for Sunday's opponents Chelsea considering his previous form against the Londoners. 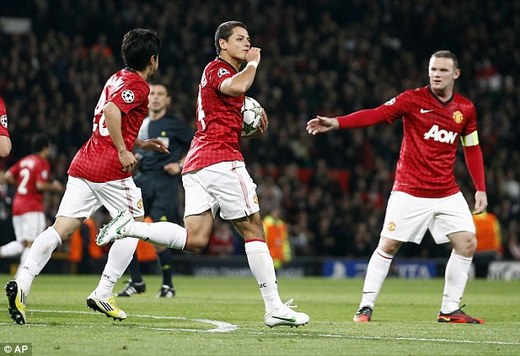 The Reds made a disastrous start by conceding a corner inside the first minute and falling behind moments later. Hugo Viana's cross did not appear to carry huge conviction as he swung it into the danger zone but Alan beat Alexander Büttner to steer an unstoppable header wide of David De Gea.

Clearly unfazed by the occasion, Jose Peseiro's side passed the ball crisply and with confidence during the opening stages as United, with captain Wayne Rooney in a deep role, struggled to mount any pressure on Beto's goal. Ruben Micael's warning shot wide was not heeded and Eder tricked his way past centre-back Michael Carrick to tee up Alan for a well-taken second.

Sir Alex's side found themselves in the familiar position this term of needing to stage a comeback and, within five minutes, the deficit had been halved. Robin van Persie was up-ended after showing neat skill on the left but referee Milorad Mazic allowed the advantage with Shinji Kagawa in possession. The Japan international lofted across for Hernandez to stretch and head goalwards with Beto only able to help the ball over the line.

Carrying more threat, van Persie chested Rooney's chip and swivelled to power a drive wide and Hernandez was unable to convert a cross by the Dutch striker following another smooth link-up with Rooney, Beto this time scrambling the shot to safety.

Alan thumped a volley wide as he hunted a hat-trick but the hosts started showing greater purpose and a goal by Hernandez was wrongly ruled out with Kagawa unfairly flagged offside. Büttner was upset not to earn a penalty after clashing with Leandro Salino but Braga weathered the storm and finished the half in relative comfort with Viana hammering a speculative attempt over the bar.

Nani's introduction at the expense of Kagawa provided more sparkle down the right with Rooney switching to the opposite flank to facilitate a switch to 4-4-2. Beto was still largely untroubled, however, although he managed to beat away a van Persie free-kick from a difficult angle  after Rafael's adventurous run drew a foul.

Nani got his header all wrong from a Rooney corner but another flag-kick produced the equaliser on 62 minutes. Van Persie's low set-piece was flicked on by Carrick for his defensive partner Evans, who missed with his first swing of the ball but was alert enough to roll in when the rebound fell kindly for him. It was just reward for the Northern Irishman, who looked the best player on the pitch in the second half. 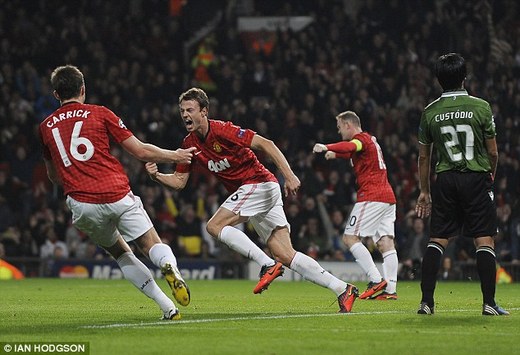 The stage was set for United to press with Braga content to only attack sporadically on the break after surrendering their two-goal advantage. When Evans intercepted a rare Portuguese foray to release Hernandez, the Mexican shrugged off a rough challenge by Andre Coelho to feed Nani but the winger's powerful first-time shot was parried away by Beto.

With a quarter of an hour left, Sir Alex's side edged in front with a goal of genuine quality. Tom Cleverley channelled David Beckham on the right wing, taking a touch to bend in a cross that invited the finishing touch. Hernandez duly obliged with a stunning header that had the net bulging in front of the Stretford End again.

The No14's work was done for the night as he left the field to a huge ovation with Ryan Giggs taking his place for the final 10 minutes or so. Braga showed they were not to be written off as De Gea's short pass to Cleverley caused some panic in defence but the Spaniard clutched a header confidently from the corner.

Van Persie should have wrapped it up when played onside to receive Nani's clever pass but the ex-Arsenal attacker was, for once, unsure with his finish and blazed over the top when a fourth goal seemed on the cards. With Ze Luis lashing a late effort off target, it did not matter too much in the final reckoning as United pull clear at the top of Group H, and are well on course to erase memories of last year's early exit from the competition.