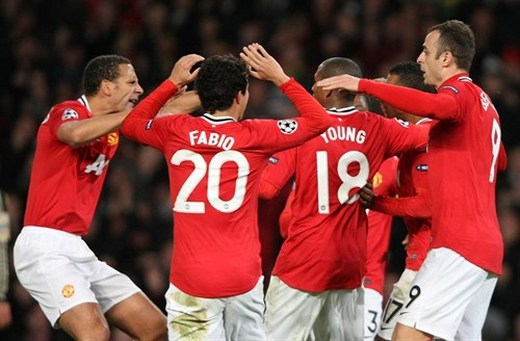 For those who criticise the Champions League group stages, this fabulous affair was evidence of the sort of entertainment it can provide.

United went behind to an early Phil Jones own goal but battled back valiantly with goals from Dimitar Berbatov, spearheading the team in Wayne Rooney's absence, and Darren Fletcher. The Portuguese visitors responded swiftly through Pablo Aimar to keep their unbeaten run this season intact and a Nani cross that deflected behind in injury time proved the final throw of the dice.

As it stands, United are second in Group C - level on points with Benfica but crucially behind Tuesday's opponents on the head-to-head format - with Jorge Jesus' outfit due to play Otelul Galati in the final round. Basel held out for a 3-2 victory in Romania and they sit only a point behind last season's runners-up in the table.

The Reds got off to a nightmare start when an incisive move down the right in the third minute saw Maxi Pereira feed Nicolas Gaitan and the winger's cross was shinned into his own net by Jones, giving David De Gea no chance.

Gradually, Sir Alex's side responded, largely through Nani's adventurous dribbling, with Artur brought into action by the Portugal international's free-kick and a shot from Ashley Young. The visitors continued to try and disrupt the Reds' flow but the breakthrough came on the half-hour mark. Young worked a free-kick short to Patrice Evra who helped it on to Nani, always likely to be the source of any inspiration. The wide man's left-wing cross was perfect for Berbatov to guide a splendid header wide of Artur and into the net for the equaliser.

The goal sparked a frantic spell, with Young firing a one-on-one opportunity against Artur's legs after linking well with Berbatov and Aimar bringing a smart stop out of De Gea seconds later. Although Berbatov later tapped the ball into the net, Evra had long since been flagged offside and Artur was yellow-carded for his attempts to get the Bulgarian booked.

Clearly gaining in influence since his leveller, Berbatov had a drive deflected over by Ezequiel Garay's desperate block following some neat work by Young as the sides went into the break all-square, allowing the fans to catch their breath.

The second half was just as exciting and began with Young's side-foot shot being blocked at close range following some fine work by Nani. Fabio spurned a glorious chance on 54 minutes when Jones' strong pressing led to him being in the clear with only Artur to beat but the keeper saved the attempted chip.

Undeterred, the Reds kept knocking on the door and, soon after Benfica lost Luisao to injury, Fletcher edged his team in front. Evra's superb ball into the box allowed the Scot to find the net, at the second time of asking after Artur did superbly to block his initial shot. Old Trafford's joy was short-lived, however, as De Gea's misplaced kick-out gifted possession to the Portuguese side and Bruno Cesar's cross hit Rio Ferdinand and fell kindly for Aimar, who gratefully smashed home from close range.

Berbatov had the ball in the net again but Young was flagged offside, probably incorrectly, before the officials got it right when Nani appealed for a penalty under Javi Garcia's challenge. Referee Cuneyt Cakir merely waved play on. Goalscorers Aimar and Fletcher traded off-target efforts, before Berbatov really should have restored the Reds' lead. Fletcher's intelligent pass freed Fabio and the Brazilian's cross was volleyed over by the unmarked Bulgarian inside the box.

It proved a costly miss as, despite the introduction of Javier Hernandez for Antonio Valencia, the Reds were unable to gain the victory that would have made the qualification process considerably easier. Indeed, Rodrigo went closest to a winner when easing past Fletcher but firing wide with his left foot. As it is, the final group fixture in Basel next month carries great significance and any hope of topping the group may have vanished in the cold Manchester air.

David De Gea
Dealt smartly with a Pablo Aimar shot and also made a more routine save from the Argentinian but he'll be disappointed it was his kick-out that led to the Benfica forward's equaliser. Otherwise, he was very assured and had no chance with the own goal.

Fabio
A tough character who made some spiky challenges and tackled with gusto. A casual chip allowed Artur to save when clean through in the second half but he also crossed well for a gilt-edged Dimitar Berbatov chance. Made one excellent recovery tackle after losing the ball high up the field.

Patrice Evra
Struggled initially to cope with Nicolas Gaitan, who was playing on the right, but grew in stature and went on to enjoy an impressive display. Joined the attack with his usual vigour and enterprise and it was his excellent centre that created Darren Fletcher's strike.

Phil Jones
After being moved into the middle due to Nemanja Vidic's suspension, the young defender suffered an awful start when putting through his own net in the third minute - although Gaitan's cross did take a slight deflection off Evra. Recovered his composure and one piece of beligerent play led to a clear chance for Fabio.

Rio Ferdinand
Calm and unflappable throughout but was angry with the second goal United conceded. The ball struck him at an awkward height and fell invitingly for Pablo Aimar to slam in from close range as Benfica replied almost instantly to Fletcher's goal.

Antonio Valencia
A little quiet, even if he did link up well with Fabio on a couple of occasions. Was unable to make the most of one promising break in the first half and was replaced with 10 minutes remaining by Javier Hernandez.

Michael Carrick
A fine display as he grew more adventurous in his passing and helped United dictate matters at times. Some crunching tackles were a feature of his play and he was hugely unlucky to be booked for a fair one on Aimar. The yellow card means he misses the crunch trip to Basel. A sweeping pass to Nani out on the left was a highlight.

Darren Fletcher
Neat and tidy in midfield and tracked back intelligently. Of course, his goal edged United in front, reacting sharply when Artur saved his initial shot to prod home his finish into an empty net. Was beaten by Rodrigo when the forward shot wide in the dying seconds but he can be well pleased with his work.

Nani
Clearly up for the challenge of facing his fellow countryman, he was robust and firm in the tackle. A slalom run got the crowd on its feet, only for Ezequiel Garay to end it with a crude foul and he was given some rough treatment. Assisted Dimitar Berbatov's header with a superb cross and teed up Ashley Young for a great chance in the second half. Had a penalty shout rejected.

Ashley Young
Worked hard in an advanced role, playing centrally off Berbatov, but was unable to get on the scoresheet. Was thwarted by Artur in a one-on-one seconds after Berbatov's equaliser and he was unable to convert a Nani centre after the interval. Drifted offside on a few occasions but that was understandable as he tried to adapt to a role he's not really been used in at Old Trafford.

Dimitar Berbatov
Had a quiet opening as he led the line but his influence grew markedly after placing a header wide of Artur from Nani's cross. Garay deflected a shot from the Bulgarian over the bar and he was guilty of blasting a volley over the top that could have won the points late on. Twice tapped into an empty net after the whistle had gone.

Javier Hernandez (for Valencia, 80)
Had little sniff of goal after coming on for the final stages.

Chris Smalling (for Fabio, 82)
Tasted some action towards the end and was unable to steal the headlines with a wild shot well over the top.