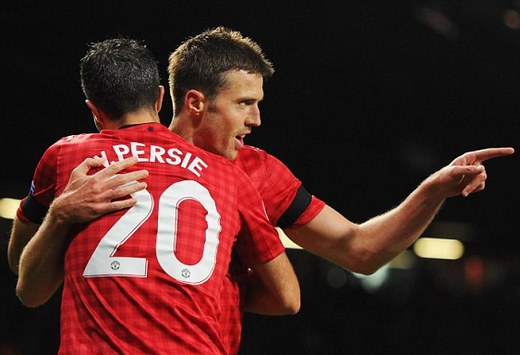 The Reds survived an early penalty scare before taking the lead inside seven minutes through Michael Carrick. Nani wasted a chance to add a second from the spot after the interval, while David De Gea was required to be at his best to ensure Sir Alex's men took all three points from a fixture that also marked the return of Darren Fletcher – on as a second-half substitute – to first-team football following 10 months on the sidelines.

The Reds boss, still smarting from last season's group-stage exit, made good on his promise to "take no risks" and play his strongest team. Robin van Persie and Shinji Kagawa returned to the starting XI, while Patrice Evra was recalled at left-back.

The real eye-catching team news, however, was Darren Fletcher's inclusion as a substitute. The Scot has been battling a serious bowel condition that's kept him out of first-team action since November 2011 and some predicted he'd never play again.

Those people obviously don't know Darren Fletcher. A determined and dogged character, Fletcher has worked immensely hard in the intervening months and his 16 minutes of action here will hopefully be the first of many over the coming months.

De Gea, assured between the posts all night, was lucky not be called into action inside a minute when Vidic, attempting to reach a short Evra pass, caught Umut Bulut inside the penalty area. Galatasaray appealed for a penalty but German referee Wolfgang Stark waved play on.

At the other end, Fernando Muslera did well to bravely block Nani's clipped effort after a smart interchange with Kagawa on the edge of the box.

The Japanese midfielder was involved again on seven minutes for United's opening goal, combining well with Carrick to send the no.16 clear. With Muslera advancing, Carrick shaped to shoot but instead calmly dragged the ball around the goalkeeper.

The stopper's outstretched leg caught Carrick, however, and caused him to stumble. A penalty and a red card loomed, but the Reds midfielder, now on the ground, managed to hook the ball into the empty net with his left foot to open the scoring and spare the Galatasaray goalkeeper further punishment.

The visitors struck the crossbar through Nordin Amrabat soon afterwards but didn't threaten again until Hamit Altintop grazed the base of De Gea's left-hand upright on 38 minutes.

By then, Sir Alex's men had seen two penalty appeals turned down – one for handball by former Arsenal defender Emmanuel Eboue and one for a  well-timed tackle by centre-back Dany Nounkeu to halt a tricky Kagawa run – while Valencia's driven delivery from the right almost forced an own goal.

The scoreline at the break will have pleased the Reds boss, but spells of Galatasaray possession and defensive ill-discipline served as reminders that this match was not won yet.

Nani's penalty miss on 53 minutes, after Rafael was brought down by striker Burak Yilmaz, only compounded that feeling. The Reds have now missed three spot-kicks in as many matches – Hernandez and van Persie the other culprits – and must be yearning for the return of Wayne Rooney from injury. This one, a tame effort after a stuttering run-up, was easily saved by Mulsera.

Selcuk Inan went close to rubbing salt in the wound when his glancing header sailed narrowly past the far post before Vidic spurned a chance from close range and Evra flashed a shot across goal at the other end.

The Reds had another penalty appeal turned down when Nani went tumbling under substitute Emre Colak's challenge. There was barely time to complain, though, as Galatasaray countered at speed and, through Yilmaz and then Colak, forced De Gea into two fine saves. The second was world-class, a finger-tip stop at full-stretch.

Darren Fletcher's introduction in the 79th minute drew a cheer almost as loud as Carrick's goal and it was that strike that ultimately settled this opening Group H fixture.

Both sides will rue missed opportunities – Hernandez spurned two golden chances in injury time – and Galatasaray can certainly be proud of the part they played in an entertaining contest. It's United, though, who are off and running, back with a bump if not a bang in the Champions League.