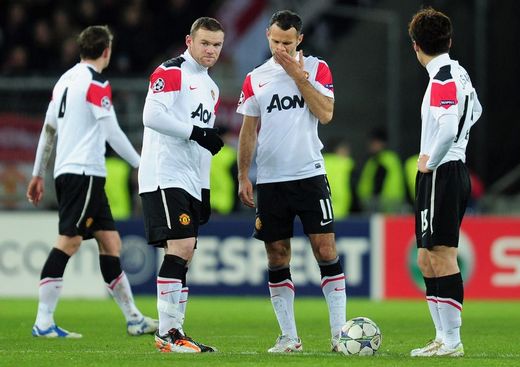 United are out of the Champions League after slipping to a 2-1 defeat in Basel, courtesy of goals from Marco Streller and Alexander Frei.

Despite dominating most of the match, the Reds were beaten as Streller's early strike was added to by Frei's close-range effort in the 84th minute. Phil Jones' late header, his second goal in consecutive games after breaking his career duck at Aston Villa, proved insufficient as the hosts held out in injury time. United will instead compete in the Europa League for the first time and a night of misery was compounded by Nemanja Vidic's knee injury just before half-time with fears that the Serbian faces a lengthy spell on the sidelines.

Sir Alex opted to field Wayne Rooney in a lone striker's role and the Reds settled quickly despite the wet conditions. Ji-sung Park curled an early shot on the turn wide and there had been no real warning of what was to follow at the other end in the ninth minute. With Chris Smalling stricken on the ground with a head injury after a collision with Vidic, play was allowed to continue with Xherdan Shaqiri's driven cross only kicked out by David De Gea to Streller, who returned it with interest by smashing past the Spanish keeper.

United's bright opening had counted for nothing and it was left to Nani to try and inspire a response. The winger fired over from a central position before being guilty of an over-ambitious long-range effort when Yann Sommer gifted him the ball. Some classic wing play by the Portugal international should have produced the equaliser but his inviting cross was miskicked by Rooney with Park also unable to convert inside the six-yard box.

Nani continued to be the main outlet and an outrageous piece of skill saw him battle past two defenders before Ashley Young eventually headed off target. The dominant visitors continued to press and Ryan Giggs' excellent reverse pass released Rooney, only for the striker's shot to lack the power to really trouble Sommer. Some desperate defending was required to block attempts from Nani and Phil Jones but the half ended in dismay with captain Vidic taken off a stretcher after sustaining a serious-looking knee injury. Without the skipper, United were under real pressure going into the second half and needed to step up to the plate.

Basel gained more possession after the break but Rooney raced onto another fantastic through ball by Giggs, only to curl wide with his crafty attempt failing to bend accurately enough. Nani forced a diving save out of Sommer but Basel carried greater threat themselves with Shaqiri off target after Streller capitalised on a quick throw-in. De Gea then produced a flying save to keep out an Alexander Frei free-kick and keep United in with a shout.

On the hour mark, only the woodwork denied the Reds as Markus Steinhofer inexplicably hammered a Nani cross against the underside of his own bar. Young was unable to convert the rebound and another chance was missed when Rooney cut inside but dragged a tame shot wide. Sir Alex replaced Young with Danny Welbeck in a bid to add more energy to his attack but Rooney was offside when heading over a Smalling cross from close range as time started to run out.

When a corner fell to Rooney on the edge of the box 15 minutes from time, he could only steer a deliberate shot the wrong side of Sommer's left-hand post and Jones stormed forward only to deliver a cross to the grateful Sommer. One final throw of the dice from the manager with nine minutes left saw Federico Macheda replace Park but, to everyone's surprise, it was Basel who found the net next.

Shaqiri whipped over a dangerous cross from the right that was not dealt with by the United defence and Alexander Frei got behind Smalling to stoop to conquer and delight the noisy capacity crowd. Jones pulled one back with a couple of minutes left by heading over the line after Sommer thwarted Welbeck and Macheda rattled the underside of the bar. With only three minutes of stoppage time played, however, there was no realistic chance of a dramatic late rescue act.

Benfica win Group C after disposing of Oteleul Galati but there will be no further Champions League involvement for last season's runners-up, the Reds instead being left to try and win the Europa League for the first time.

David De Gea
Will be disappointed with his early clearance, which fell to Streller to volley home, but was on hand to make a fine tip-over from Alexander Frei’s free-kick after the break. Could do little about the second goal.

Chris Smalling
Was in the wars in the build-up to Basel’s goal after an accidental knock to the face from Vidic. Did his best to support Nani in attack in the first 45, but didn’t see as much of him after the break. May feel he should have cleared the cross for Basel’s second goal.

Rio Ferdinand
Both he and Vida were kept on their toes by the lively Shaqiri, while Streller was a handful in the air. Not United's best defensive display as a uni,t which is disappointing when you consider our recent run of not conceding.

Nemanja Vidic
A disappointing night for the captain, who was stretchered off with a nasty-looking knee injury just before the break.

Patrice Evra
Shaqiri ensured most of the back four, particularly Evra, were kept fully occupied when Basel had possession. Got forward when he could to link up with Young and later Park, but the Reds got little joy down the left flank.

Nani
By far United’s liveliest performer, he gave Park Joo Ho a torrid time. Sent an effort just over the bar shortly after Basel’s opener and saw another well saved soon after the break. Put some decent deliveries into the area but unfortunately no-one could finish them off.

Phil Jones
Full of running throughout and was never afraid to go in for a tackle. Continued to drive forward as the Reds went in search of a vital equaliser and handed United a lifeline with two minutes remaining when he headed home. Unfortunately, it proved too little, too late.

Ryan Giggs
Showed some neat touches and good control in the centre of midfield and supplied Rooney in particular with some lovely through-passes. But he, like the rest of United’s attackers, was unable to unlock the Basel defence.

Ashley Young
Started the game brightly, but struggled thereafter with much of United’s best play coming down the right. Hit a low effort straight at Sommer just before half-time before being replaced by Welbeck on 65 minutes.

Ji-sung Park
Played in the hole just behind Rooney for an hour before switching to the left following Welbeck’s introduction. Had an early sighter which flew over and couldn’t properly connect with the follow-up from a Rooney mis-hit.

Wayne Rooney
Looked lively in attack, but will be disappointed not to have put away one of many chances. Missed a great opportunity on the half-hour from six yards out, shot straight at keeper soon after and then saw two curlers drop wide in the second half.

Jonny Evans (for Vidic, 44 mins)
Difficult to come in halfway through the game and then had to play on both the right and left side of defence. Couldn't prevent the second goal and was ready to try and force the ball over the line when Jones eventually scored.

Danny Welbeck (for Young, 65 mins)
Injected some direct running into United's game and looked hungry to create chances. He would have hoped for a longer cameo but can hold his head high.

Federico Macheda (for Park, 82 mins)
Unwittingly set up Jones' winner but should have scored himself instead of hitting the bar.