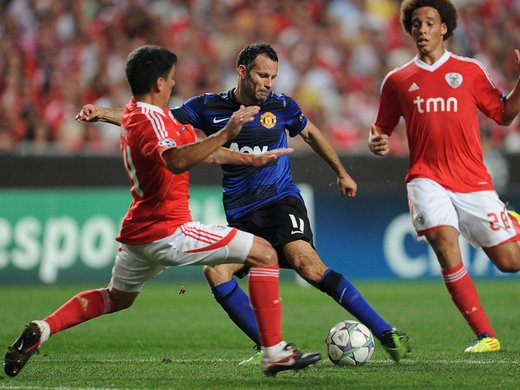 United’s young generation may have caught the eye so far this season, but it was the team’s elder statesman Ryan Giggs who stepped up to the plate in the Champions League opener against Benfica, earning the Reds a hard-fought point in a hugely entertaining contest at the Estadio da Luz.

Oscar Cardozo had put the impressive Portuguese side ahead with a fine finish on 24 minutes, but Giggs’ run and glorious strike just before the break ensured it finished honours even in Lisbon.

It was all change when the team-sheets came through as Sir Alex recalled a host of familiar faces, many of whom were in need of some minutes on the pitch. David De Gea was afforded a rest as Anders Lindegaard came in between the posts for his first Champions League appearance in the red shirt, while Fabio joined Chris Smalling, Jonny Evans and Patrice Evra in the back four. There was a new look to United’s attack with Ji-sung Park, Ryan Giggs, Darren Fletcher and Antonio Valencia all making their first starts of the season. Michael Carrick joined the quartet in midfield with Wayne Rooney occupying the lone role up front, as he has so often done away in Europe.

Many believed this would be United’s toughest game of Group C and the opening half an hour did little to dispel that theory as Jorge Jesus’ side, backed by an incredibly vocal support, went for the jugular.

While Javi Garcia, Ruben Amorim and Axel Witsel were pulling the strings in midfield and driving Benfica forward at every opportunity, it was Nicolas Gaitan, playing down the left, as part of a three-pronged attack, who really caught the eye for the home side. He went close to testing Lindegaard with a thundering effort on 17 minutes which flew wide, before Oscar Cardozo stung the palms of the Danish goalkeeper with a well-struck shot from the edge of the area.

Cardozo was not to be denied on 24 minutes, however, as Benfica deservedly took the lead. The lively Gaitan played his part with a sublime pass over the top to the big striker who pulled the ball down brilliantly before lashing it home into the far corner.

Benfica weren’t about to let up on their attacking play and continued to keep United’s back four on their toes for much of the rest of the half. There was no sign of panic from the Reds though who have mastered the art of picking up positive results away from home in the Champions League and three minutes from the break parity was restored… and how. Good work by Valencia allowed Giggs to scamper towards goal, cutting in from the right, before letting fly with a stunning 20-yard effort into the top corner. It was the veteran’s 29th European Cup goal and puts him just one behind current record-holder Ruud van Nistelrooy.

United began the second period as Benfica had started the first and both Rooney and Giggs were unlucky not to get on the end of Valencia’s fizzing centre across the face of goal just seconds after the restart.

The Reds temporarily took control thereafter as they went in search of a second, but Benfica still posed a threat. Pablo Aimar chanced his luck from 25 yards, while Lindegaard was called into making a fantastic save low to his left from substitute Nolito after a sweeping move from Benfica involving the ever-lively Gaitan.

Just before that, at the other end, Fletcher had seen his ricocheted effort drop kindly into the arms of Artur, while Giggs would have netted another brilliant solo effort but for Artur deflecting his low drive from inside the box away for a corner.

Nani and Chicharito entered the fray as Benfica’s dominance grew. The home side were piling forward at every opportunity and the Reds had Lindegaard to thank for another excellent save from Gaitan whose curling effort was heading for the top corner.

Nolito had the chance to win it for Benfica two minutes from time after bursting into the area but he slid his effort just wide. A point was a fair result in the end with a home game with Basel next in Europe for the Reds at Old Trafford.