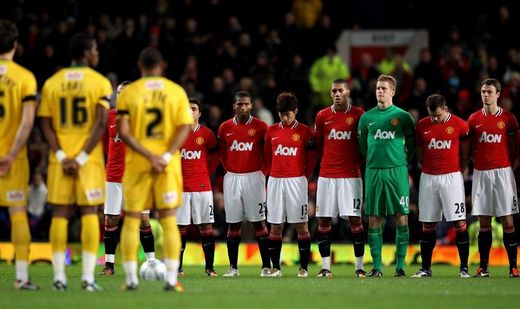 United's Carling Cup campaign is over after Crystal Palace snatched an extra-time winner at Old Trafford to seal their place in the semi-finals.

The Eagles join Manchester City, Cardiff City and Liverpool in the last four after goals from Darren Ambrose and Glenn Murray dumped Sir Alex Ferguson's men out of the competition.

Ambrose's stunning strike gave the visitors a surprise lead midway through the first period but Federico Macheda soon equalised from the penatly spot. That sent the game to extra-time, where Murray headed home on 98 minutes to send the Championship side into the semi-finals. United's disappointment, meanwhile, was heightened by first-half injuries to Fabio, Rafael and Dimitar Berbatov (who left Old Trafford wearing a protective boot).

This wasn't a United team full of youngsters, either. Eight of United's starting XI were either current or retired senior internationals. Only Ben Amos, Rafael and Federico Macheda are yet to win a full cap. That meant there was no place from the start for the likes of Paul Pogba, Ravel Morrison, Michael Keane, Zeki Fryers or Larnell Cole, all of whom have featured in this season's earlier rounds.

Crystal Palace, currently 12th in the Championship, enjoyed a bright start in front of their vocal travelling support, with both Wilfried Zaha and Jermaine Easter momentarily sneaking behind the Reds' defence inside the opening 10 minutes.

United weren't overrun, though. The Reds kept possession well, passed the ball on the ground and patiently probed for openings. Darron Gibson, given the task of anchoring the midfield in his first start for seven months, was heavily involved, spreading the ball to both flanks and consistently providing the Reds' centre-backs with an outlet.

Still, there was precious little goalmouth action in the first period and neither Amos nor Lewis Price had to make a save of any note before the interval. The closest anybody came to breaking the deadlock was on the stroke of half-time, when Mame Biram Diouf rounded off a speedy counter-attack by sending an acrobatic effort just over the crossbar.

The only other incidents of note in a dour first 45 minutes were unfortunate hamstring injuries that forced United's Fabio and Palace's Sean Scannell off and knocks to Berbatov and Dean Moxey (both ankle) that meant neither reappeared for the second half.

In Berbatov's place, Sir Alex thrusted Ravel Morrison, the talented teenager with an uncanny knack for unlocking opposition defences. His energy and creativity certainly made a difference, although it was Patrick McCarthy's defensive error that gifted the first chance of the second half to Antonio Valencia, who slid his shot wide of the post when clean through on goal.

Morrison then got in on the action, stinging Price's palms after neat control 25 yards from goal, while Macheda fluffed a volley shortly afterwards. Price then had to be alert to keep out another Morrison effort with his feet as United ramped up the pressure in search of the game's opening goal.

It duly arrived, but at the other end. And boy was it a cracker, Darren Ambrose collecting the ball 40 yards from goal before advancing briefly and firing an unstoppable effort into the top corner. It was arguably the best goal scored at Old Trafford by a visiting player since Dean Ashton's overhead kick at the Stretford End in 2008, and yet Ambrose's joy was short-lived.

Within three minutes the Reds were level, Federico Macheda slotting home from the penalty spot after being tugged to the ground by McCarthy. Palace fans felt aggrieved but replays showed their captain had grabbed a fistful of Macheda's shirt in a desperate attempt to preseve his side's lead.

With parity restored and Paul Pogba, sent on moments before Ambrose's thunderbolt, beginning to assert himself more in the middle of the park, United pushed for a winner. That inevitably left a few gaps at the back and Palace weren't shy in exploiting them. It made for an entertaining final 10 minutes but ultimately neither side could prevent the tie from going to extra-time.

Despite heavy Reds presssure, Palace struck the crucial blow. Substitute Glenn Murray, perhaps standing marginally in an offside position when Ambrose's free-kick was whipped in, eluded his marker to head the visitors in front after Ji-sung Park had illegally halted Zaha's run.

Gibson and Macheda both went close to nabbing a second equaliser, while Ambrose tested Amos with another bullet from distance before the extra-time interval. The Reds then threw everything at Palace in the final 15 minutes as Sir Alex's men pressed for penalties but the Londoners stood firm to register a famous victory.

Sir Alex, meanwhile, could only apologise to fans at the final whistle and insisted "that was not a Manchester United performance".

Ben Amos
Kicked well all night and had no chance with either Crystal Palace goal. Only called into action once, when he dived to his right to keep out a long-range free-kick.

Rafael
One of United's brightest sparks until he was forced off the pitch in the second half. Very strong defensively and also showed his usual attacking thrust.

Chris Smalling
A fabulous performance from the young centre-back. Won a number of tackles and, as always, remained cool under pressure from attackers.

Jonny Evans
Lost Glenn Murray for the briefest of moments for Palace's second goal but it was the only slight blip on an otherwise excellent evening. Looked supremely solid.

Fabio
There was a good battle shaping up between the Brazilian and Palace's tricky winger, Wilfried Zaha, but unfortunately Fabio limped off with a hamstring injury.

Antonio Valencia
A stunning turn and outside-of-the-foot pass ignited the first half and Valencia was also central to the Reds' late but ultimately unsuccessful charge. Mucked in defensively, too.

Darron Gibson
An encouraging performance given he's not started a first-team game for seven months. Passed the ball well but was frustrated at times by a lack of movement ahead.

Ji-sung Park
A largely quiet evening for the Korean, who struggled to assert himself on the game until its latter stages.

Federico Macheda
Showed great maturity and nerve to step up to convert the penalty he won but his influence was otherwise limited, although in fairness he was deployed in an unfamiliar wide role.

Mame Biram Diouf
Palace's physical approach at the back seemed to unsettle the Senagelse striker, although he went close at the end of the first half with an acrobatic attempt.

Dimitar Berbatov
Came off at half-time after picking up a knock on 20 minutes. Never really got going either before or after that blow, though.

Ezekiel Fryers (for Fabio)
A strong performance from the young left-back, although could have cleared his lines better on a couple of occasions. Generally, though, a very bright outing.

Ravel Morrison (for Berbatov)
Injected creativity and urgency to the game and pulled off a number of clever flicks/passes. Influence waned slightly as the match entered extra-time.

Paul Pogba (for Rafael)
Did himself no harm with a solid if not spectacular showing in the centre of midfield. Almost scored with a belting shot from 25 yards soon after coming on.