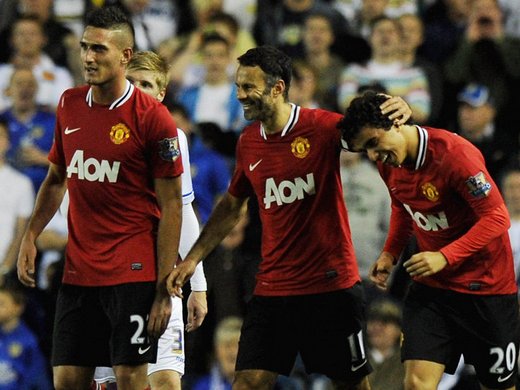 United defused a potentially explosive Carling Cup tie at Leeds with a first-half display of composure, control and devastating football.

Michael Owen is simply a natural goalscorer. Within 15 minutes of his first involvement of the campaign, the striker had silenced the home fans and his second strike was a thing of beauty. Captain Ryan Giggs capped of 45 minutes of dominant play with a stunning solo effort that he could have been scoring here in the mid-nineties.

Even with a side designed to give players a game under their belt, hence the inclusion of Michael Carrick alongside Ezekiel Fryers at centre-back and four forwards in the line-up, the Reds were a cut above their rivals from across the Pennines.

The game’s first opening fell to the hosts, and spawned a melee of desperate interventions in the United ranks. Tom Lees’ powerful header was blocked by Dimitar Berbatov, Ben Amos repelled the defender’s follow-up and Berbatov was again on hand to thwart Ross McCormack’s attempts to turn in the loose ball.

Around a game largely devoid of early inspiration, however, the most compelling contest was taking place off the field, as both factions of supporters waged choral war on one another. On the quarter-hour mark, only the visiting section was audible as United moved ahead in devastatingly simple circumstances.

Berbatov slid an inch-perfect pass into the path of Ji-sung Park, who had timed his run perfectly. The South Korean fed Owen, who needed only two touches: one with his right foot to tee up the shot; the second with his left foot to roll a finish in-between Aidan White’s legs and into the net, via the base of Andy Lonergan’s left-hand post.

Leeds’ response was gradual, as Adam Clayton thudded a decent effort into Amos’ midriff and Robert Snodgrass curled a shot just past the upright, but the hosts’ growing menace was soon nipped in the bud, and again in clinical fashion.

Mame Biram Diouf rolled off the attentions of Leigh Bromby and advanced down the right flank before slipping a neat pass into the path of Owen. Again, the striker’s predatory instincts kicked in. One touch to kill the ball, another to send it hurtling into Lonergan’s top corner with hardly any backlift.

Thereafter, Leeds’ defence creaked under pressure every time United picked up the ball in midfield, with Giggs and Park pulling the attacking strings and Owen and Berbatov dropping between the hosts’ lines to link play. Antonio Valencia slid horribly wide from the six-yard box, then forced Lonergan into a scrambling save as he tried to drill a low cross to the lurking Owen, but a third goal finally arrived in the final moments of the half.

Giggs took a short corner to Park, received the ball back and nutmegged Snodgrass with regal ease, before advancing into the box and stabbing a finish which nicked Luciano Becchio’s shin on its way past Lonergan. That was the veteran’s final contribution of the half, as he made way for Paul Pogba during the interval.

Leeds had no answer and were unable to muster a significant response with Owen close to completing a hat-trick with a chip that drifted wide, after latching onto a Berbatov through ball and displaying composure inside the box. Another threaded through ball by Berbatov released Federico Macheda but the Italian shot wide when offside in any case.

Amos was rarely tested but handled well under pressure from Ross McCormack as Sir Alex introduced fit-again Danny Welbeck and another debutant in Larnell Cole in place of Diouf and Macheda.

Clayton, a self-confessed City fan, was unable to grab a consolation he'd remember when his effort blazed over the top with United limiting the hosts to sporadic attacks and moments of danger. Even an injury to Fryers, who was flawless at the back, which led to Park and then Berbatov filling in for the ten men at the heart of the defence, seemed to add insult to injury to Simon Grayson's team. Ramon Nunez's late shot wide proved to be the final effort as the Reds eased through.

Ben Amos: A clean sheet and safe handling from the young keeper who, in truth, was rarely extended. A couple of catches from crosses exuded confidence and he made a decent stop when Mika Vayrynen was offside in any case.

Antonio Valencia: Filled in a right-back after doing a good job there against Chelsea. Looked more at home going forward, as you'd expect, but never slackened from his duties in defence and his strength makes him a formidable barrier. Should have scored when prodding a Michael Owen pass wide in the first half.

Ezekiel Fryers: Never put a foot wrong in the heart of the defence and will be well pleased with his debut. Looked unfazed from the start and was rarely troubled by the Leeds attackers before being forced off through injury, leaving the Reds down to 10 men.

Michael Carrick: Slipped in to the back four with ease and displayed his ability to read the play effortlessly. Took over the armband from Ryan Giggs in the second half and made a couple of excellent clearances.

Fabio: Needed to take extra responsibility and he thrived on it. Was slick with his passing and incisive with his tackling, although one over-exuberant tackle brought a yellow card. Made a towering header when needing to cover in the middle in the closing stages which summed up his enthusiasm for the game.

Mame Biram Diouf: A little out of position out wide, but he tracked back and worked hard. One air-shot betrayed a few nerves in the opening exchanges but he was soon fired up and in the thick of it, picking up a yellow card for a mistimed tackle. Heavily involved in Owen's second goal, earning the assist following some impressive battling for possession.

Ryan Giggs: Captain fantastic and a majestic presence in midfield. Ignored the taunts from the home fans with a brilliant solo strike on half-time after a cheeky nutmeg on Robert Snodgrass and just oozed class from a central role. Rested at the break.

Ji-sung Park: Effervescent and energetic but disciplined as well as a senior figure in the side. Had to weather a couple of stern challenges but he just does the simple things very effectively and is an ideal role model for the younger players. Set up Owen's opener.

Federico Macheda: Took a while to get into the game from an unfamiliar position but tried to make his mark and get involved. Showed his natural aggression and raw qualities before making way for Larnell Cole late on.

Dimitar Berbatov: Ended up playing at centre-back but still looked comfortable on the ball there. Greeted the crowd to some lovely touches and killer passes, seemlessly linking the midfield with the attack. Fed Park in the move that led to Owen scoring the first goal.

Michael Owen: His first action of the season and it only took 15 minutes to make his mark. His rolled finish may not have been the most spectacular but his second, a ferocious drive, proved he just loves scoring goals. Unselfishly passed to Valencia when presented with another opening and chipped just wide when hunting a hat-trick.

Paul Pogba (for Owen, 45m): His first pass at senior level was a terrific one to Valencia and he certainly doesn't lack confidence. Used his power to win the ball in midfield and was greeted by a rough challenge that left him needing treatment. Had one shot that was high and wide but a promising start.

Danny Welbeck (for Diouf, 70m): A good run-out to work himself back into contention for Stoke at the weekend.

Larnell Cole (for Macheda, 78m): Another debutant who will be thrilled with his first involvement on the big stage.