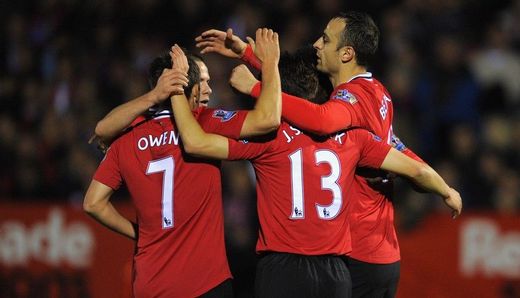 The vultures may have been circling at Aldershot hoping a Carling Cup giantkilling could lead to talk of a crisis at United. However, Sir Alex Ferguson's side swiftly sent out a message that it's business as usual after the derby day disaster by cruising into the fifth round with a convincing 3-0 triumph.

Dimitar Berbatov and Michael Owen pressed their claims by making the most of rare starts with goals in the first half before Antonio Valencia's outstanding long-range drive ended the match as a contest. A mixture of youth and experience accounted for the Shots as easily as Leeds had been disposed of in the previous round to illustrate the strength in depth at the manager's disposal.

The Reds quickly slipped into gear with Tom Cleverley firing over the bar on his return from injury when Berbatov touched a Mame Biram Diouf header back to him. Nemanja Vidic picked up a yellow card for a clumsy foul on Alex Rodman but United were soon ahead after quarter of an hour. Ji-sung Park played an incisive one-two with Cleverley and nudged an instant pass to Berbatov, who took one touch before swivelling to sweep past Aldershot goalkeeper Ross Worner.

Berbatov should have had a clear penalty when he was felled by Luke Guttridge inside the box as Sir Alex's side threatened to overwhelm the League Two team. Fabio's shot deflected wide, Berbatov's dangerous header into the six-yard box was cleared and United forced seven corners inside the first 25 minutes.

But, to their credit, Town rallied and traded goal attempts with their illustrious opponents for a spell - even if Ben Amos was only worked by one effort, from top scorer Danny Hylton. As if to emphasis the obvious gulf in quality, Owen doubled the lead to quieten the capacity crowd. After picking out Berbatov with a raking pass, the number seven showed his thirst for goals by arriving in the box on cue to convert the Bulgarian's inviting assist, despite Worner getting a touch to the shot.

The second half started in a similar vein as Valencia collected a Cleverley pass and hit a stunning drive with whip and bend that crashed high into the net over Worner's despairing dive. Berbatov was working harder than anybody and, after feeling aggrieved when having another penalty appeal waved away, as Aaron Morris handled, he stormed through when linking up with Park and dragged his finish wide when really deserving another goal.

Paul Pogba was introduced, for Cleverley, and soon had a shot well wide before Ravel Morrison and Michael Keane, for his debut, also came on for a taste of the action. United kept pressing but Park drilled wide when picked out from a corner by Owen and only a fine Darren Jones tackle thwarted Morrison following an exquisite exchange of flicks with Berbatov. Park's dynamic solo run ended with referee Peter Walton pulling play back for a free-kick on the edge of the box with Berbatov's set-piece pushed away by Worner as the Shots continued the process of damage limitation.

The game finished with a flurry of threats - Valencia spurned a glorious late chance after bursting through and Guttridge hammered a shot wide as the hosts sought a consolation goal that would at least have cheered their support. Guttridge also brought a flying save out of Amos in the closing stages with the keeper showing his concentration when it mattered most. There was to be no joy for Aldershot - nor for those hoping United's weekend misery would be prolonged any longer.

Ben Amos
Safe handling from the keeper who always looked in control. He reacted calmly to a slightly under-hit backpass by Phil Jones and dived to make his best stop very late on to deny Luke Guttridge.

Fabio
Always available and always bright and positive, he never fails to make an impact. Relished getting forward to supply crosses and was unlucky when his shot deflected off target from a Michael Owen pass. Picked up his customary knock but was okay to continue and switched flanks when Michael Keane came on.

Phil Jones
An early stray pass didn't affect his concentration as he was virtually flawless afterwards. Aggressive in the air and solid in the tackle, he enjoys playing in the middle and it showed.

Nemanja Vidic
Collected an early booking for a crude foul on Alex Rodman but the skipper grew into the game and looked to get United going with long, accurate balls forward. A firm tackle on Jermaine McGlashan showed he's back to full fitness and the end of the match was more to his liking as he was forced to defend valiantly.

Ezekiel Fryers
Handled the first test of pace from McGlashan and, although he was caught under the ball once when the winger managed to get in a shot, he dealt with the Shots' danger man well. Comfortable at left-back and in the middle, as he proved at Leeds, he can now be considered a reliable back-up option.

Antonio Valencia
Smashed a beautiful strike past Ross Worner for the third goal which was a highlight of his display. Got down the wing to good effect, in classic fashion at times, and defended impressively on occasions. Should have added a fourth when running through late on but his finish lacked composure.

Tom Cleverley
Knits everything together so tidily and had an early shot over the top as he looked to mark his comeback with a goal. Involved in the build-up to Dimitar Berbatov's opener and provided the assist for Valencia's howitzer before making way on the hour mark with Everton at the weekend perhaps in mind.

Ji-sung Park
Combined well with Berbatov all night and it was his instant prod into the path of the Bulgarian that created the first goal. A couple of crosses from the South Korean led to Berbatov headers and it was his pass that enabled the striker to run through on goal after the break before shooting wide.

Mame Biram Diouf
Left wing is not his natural position but the Senegal striker put in a good shift and linked up play well. Sent one header wide with his only chance and was replaced by Ravel Morrison in the second half.

Michael Owen
Showed his desire as always, timing his run into the area to finish a Berbatov pass to make it seven goals in seven Carling Cup games for United. Not only predatory, he was lively outside the box and able to play in his colleagues.

Dimitar Berbatov
A performance that screamed 'Pick me' to the boss and a graphic example of his professionalism. Encouraging and urging his team-mates, he was surely man of the match and could have added to his well-taken goal after 15 minutes. His contribution to Owen's strike cannot be overlooked as he attacked with real menace. Worked hard tracking back and was really in the mood for the entire duration.

Paul Pogba (for Cleverley, 60)
Effortlessly slotted in, steering a shot off target and finding Valencia with a nice pass out wide. Survived calls for a foul after a challenge on Danny Hylton but his strength was an asset, allied to his remarkable composure on the ball.

Michael Keane (for Fryers, 70)
Made a couple of nervous touches but that was to be expected on his first-team debut. Otherwise got up and down the right to good effect and showed his natural defender's instincts on a couple of occasions.

Ravel Morrison (for Diouf, 70)
Roamed the field demanding the ball and enjoyed himself. A backheel to Park was bettered by an exchange of flicks with Berbatov that could have resulted in a tremendous goal but for a sliding tackle by Darren Jones as he looked to pull the trigger.