Manchester United are out of the Capital One Cup after a shock fourth-round defeat to Middlesbrough on penalties.
After a frustrating 120 minutes of stalemate, the Reds scored only one spot-kick, through Andreas Pereira, as the Championship side claimed a famous scalp by winning 3-1 in the shoot-out.
United manager Louis van Gaal made nine changes to the side that started the 0-0 draw in the Manchester derby with Pereira, Jesse Lingard and James Wilson all afforded an opportunity to impress. Despite the youthful exuberance in the team, it was a rather flat opening period illuminated, literally, by the away fans' protest against the proposed closure of the Redcar steelworks by lighting up their mobile phones. 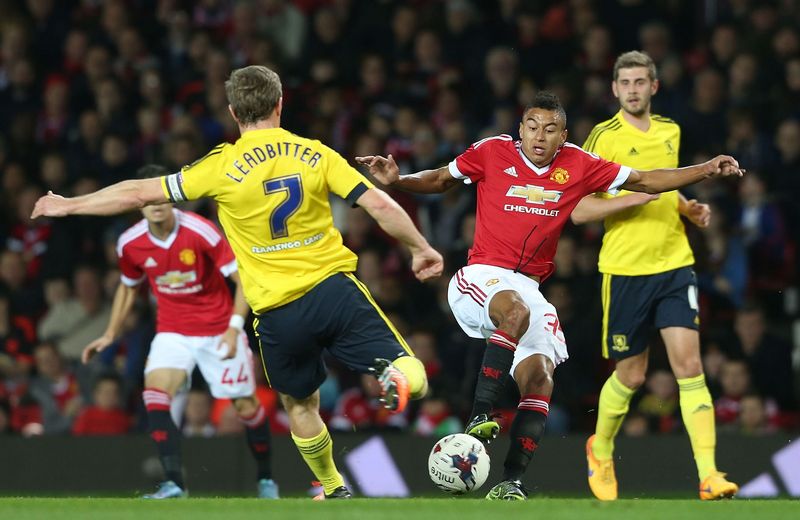 Lingard and Memphis Depay swapped flanks in a bid to unsettle the Teessiders' well-organised defence but the first save came at the other end when Sergio Romero kept out George Friend's unconvincing effort following a scramble in the box.
Memphis attempted a speculative long-range poke that Tomas Mejias watched sail wide and the Boro keeper got behind Wilson's shot soon afterwards, when Memphis and Marouane Fellaini did well in the build-up. Kike showed magnificent control but fired tamely at Romero while Friend blocked a Fellaini drive after the Belgian brought a high ball down in a dangerous position. 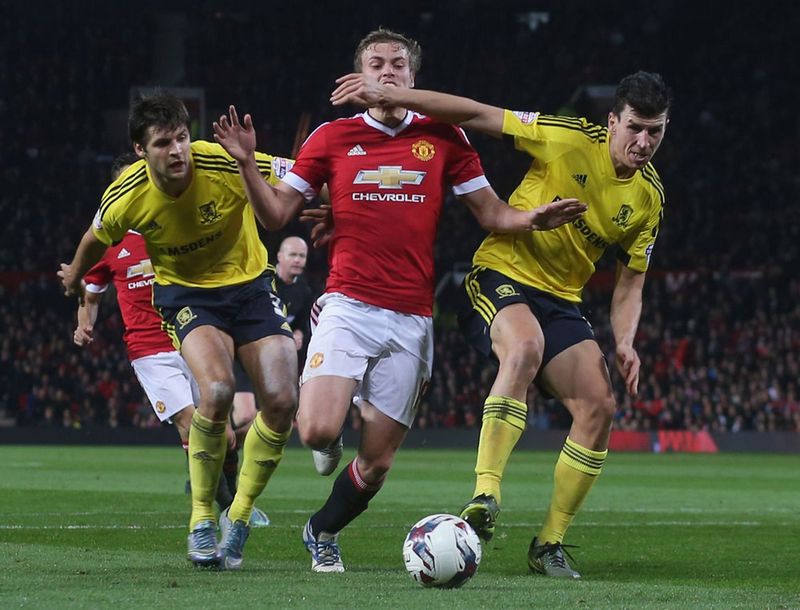 The best effort came late in the half when Stewart Downing's left-footed rocket brought the best out of Romero, who dived to make a spectacular save. Wilson was limping on his way to the tunnel and he failed to reappear, with skipper Wayne Rooney taking his place.

Possession: United 59% Boro 41%
Shots: United 3 Boro 3
On target: United 1 Boro 3
Corners: United 1 Boro 2
The game finally opened up but the Reds' shots were all too close to Mejias. The keeper almost made a real howler when mishandling Memphis's strike but recovered to claim the ball at the second attempt. Pereira, Fellaini and Lingard then all registered shots that went straight at the Spaniard, who still had not been properly tested.
Daley Blind's blushes were spared by an offside flag, that had long been raised before he fired into his own net when Kike's finish came back off Romero's left-hand post. Blind had another narrow escape when his backpass was misjudged by Romero and the ball dropped inches wide.
After Grant Leadbitter worked Romero at his near post during Boro's brightest spell, there was a strong penalty claim for van Gaal's men when Matteo Darmian's cross clearly struck Daniel Ayala's hand. Things sprung into life in the closing stages as extra-time approached. Lingard flashed goalwards but saw a combination of Mejias and the left-hand post keep him out and, although Ayala cleared off the line from Fellaini, it took two excellent stops by Romero to prevent Leadbitter and Downing from claiming a dramatic winner. 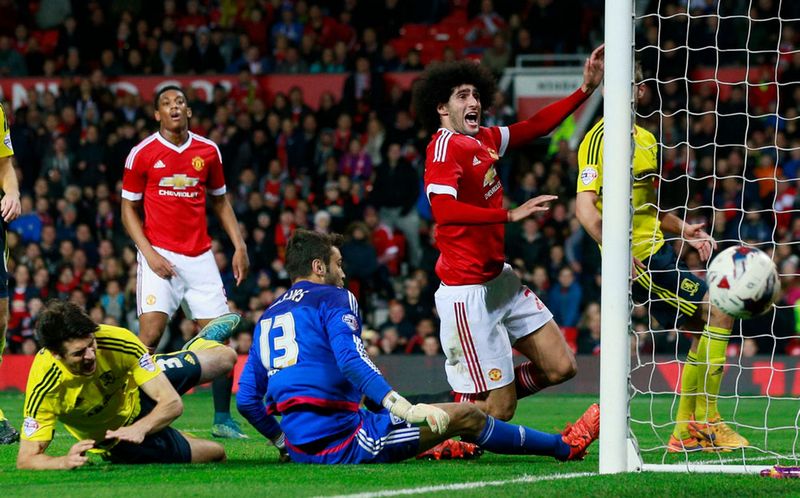 The first half of extra time yielded only one real chance as Fellaini was unable to convert Pereira's inviting cross due to pressure from Friend and Mejias, with the possibility he was being held by the defender before ending up in a heap in the net. After the restart, Fellaini broke to tee up Pereira but his finish fizzed just wide and when Ayala escaped another handball in the area it was fated to go to a shoot-out. Fellaini (twice) and Martial spurned openings in the dying seconds as the Reds failed to avoid the lottery of penalties.

Only Pereira managed to find the net as even the lifeline of David Nugent's miss failed to spark United. Rooney, Carrick and Young all failed to score from 12 yards while Leadbitter, Downing and Ben Gibson ensured it was the away fans celebrating at the end of a long evening in Manchester.

"Of course, there were some players that have played a very good game. I have to admit that I'm very proud of that because it's not an easy game against Middlesbrough. So I'm pleased with some of the performances of my players but I am also disappointed with some of my players. That's the life of the manager." - Louis van Gaal.

"I felt we dominated possession and we dominated a lot of the chances but their chances came through our mistakes. I think, in games where you dominate the other team, you have to concentrate and we were lucky not to be punished." - Chris Smalling.

#MUFC are out of the Capital One Cup after a shock fourth-round defeat to Middlesbrough on penalties. After a...