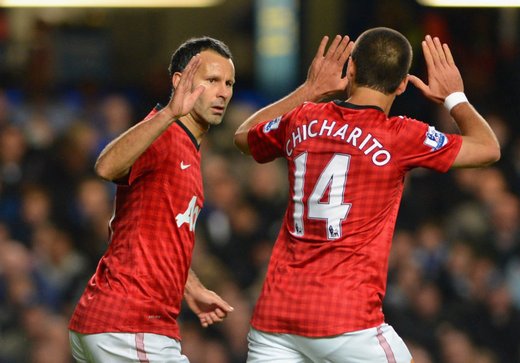 Manchester United’s bid to garner a fifth League Cup failed dramatically in the fourth round as Chelsea gained a measure of revenge for Sunday’s battle in the Barclays Premier League.

The Reds forced the Blues to go through the hard way – in fact Sir Alex Ferguson’s different set of players were seconds from achieving the same 3-2 scoreline when the hosts were handed the lifeline of an injury-time penalty kick and took the game into extra time.

Javier Hernandez – with his sixth goal in nine games against Chelsea – was joined on what looked like being the winning side of the scoresheet by veteran Ryan Giggs and another recalled winger, Nani. But three Blues equalisers – Gary Cahill’s header sandwiched by penalties from David Luiz and Eden Hazard – ultimately forced the additional 30 minutes, during which Daniel Sturridge and Ramires put Roberto Di Matteo’s men 5-3 up.

The scoring didn’t end there as Giggs converted from the spot in the 120th minute to give the Reds a final flush of hope – but the lion’s share of the nine goals had been crucially claimed by the home side in an extraordinary tie that almost upstaged Arsenal’s 7-5 victory at Reading 24 hours earlier.

The Reds entered the game with ten changes from Sunday’s starting line-up, with only Rafael retained in the eleven. And the much revised side had an early let-off when two of the attacking players enjoying a rare run-out in royal blue combined. From a position wide on the right, former Wigan forward Victor Moses bent a superb long pass to Sturridge’s feet inside the area but instead of fashioning the first shot of note, the England Under-21 international stumbled on the ball to the mirth of the baying away fans behind Lindegaard’s goal. Moses’ balance was later found wanting in a similar position, this time falling onto the ball as he tried in vain to trick his way past Scott Wootton, one half of a young United centre-back duo formed with Michael Keane.

Oriol Romeu collected the first booking of the night by tripping Buttner but Nani couldn’t punish him further from the free-kick, drilling a low shot direct at Petr Cech. The big Chelsea goalkeeper also got down well to deny Welbeck during a decent spell for the Reds.

With dismissals for Fernando Torres and Branislav Ivanonic still painfully fresh from Sunday, hearts were in mouths for the home faithful when Romeu, on a yellow card, committed another foul just outside the area, on Nani. The Spaniard escaped the shame of a red card but embarrassment encircled him down moments later when he dawdled on Cech’s short goal kick and Anderson picked his pocket to present Giggs with a very presentable chance. United's record appearance maker snapped up the one-on-one opportunity, coolly curling a low finish past the hopelessly-exposed keeper.

A defensive error at the other end meant United’s lead lasted just nine minutes, albeit a blunder forced by the blistering pace of Moses. The winger was sent sprawling by Buttner’s rash challenge and Luiz, scorer of the opening own goal three days ago, tucked his spot-kick low to Lindegaard’s right to level the contest at 1-1.

If Luiz kept his head in that key moment, he lost control in the next one – gifting not only possession on the halfway line but also the space behind him for United to ruthlessly exploit. Rafael tackled him but then Anderson was the architect, driving a pass between the scrambling Cahill and Mikel into the path of Chicharito. The in-form Mexican barely needed a second glance to beat Cech for the second time in four days, taking the ball into his stride before lashing it into the same bottom corner previously found by Giggs.

Both managers made a change at the break, with Roberto Di Matteo upgrading his eleven by replacing Romeu with Ramires, and Sir Alex also sending on an attacking midfielder in the form of Nick Powell. This required a defensive reshuffle with Rafael moving across to replace the departed Buttner at left-back and Darren Fletcher filling in on the right.

Powell almost made an immediate impact, his snapshot from outside the box ensuring Cech was still on his toes after his half-time breather. Alertness seemed to be an issue at the other end though; when United’s sluggishness in setting up for a corner afforded Sturridge so much time and space, he should have done much better than just flick the ball across the goalmouth. It was left to another centre-back, Cahill, to show the striker how it’s done from a dead ball as the England defender’s towering header made it 2-2 – despite Rafael’s effort to repel it from behind the goal line.

Corners continued to cause alarm for the Reds, with the impressive Moses despatching a free header over the crossbar. But United had regained the advantage by then, thanks to the best goal of the night. Some lovely interplay between Anderson and Nani was polished off by the latter as the Portuguese dinked the ball across Cech’s body and into the net. “Can we play you every week?” goaded the away fans, as they celebrated their side going 3-2 up at Stamford Bridge for the second successive match.

It could have been 4-2 – and Anderson could have claimed his fourth assist when his blocked shot spun towards Chicharito and the Mexican this time missed the target. At the other end, Lindegaard thwarted Moses, Aspilicueta headed over from close range and Mata had an angry penalty appeal ignored after his shot struck Michael Keane on one, if not both, of his arms.

The Reds were crying out for an outlet as Chelsea continued to crank up the pressure but with Mata curling a free-kick over the bar and Lindegaard parrying a fierce Oscar effort, it seemed Sir Alex’s men would secure safe passage into the fifth round of the Capital One Cup. In fact, that fate was just seconds away when Wootton careered into Ramires. This time, Mason had no option and the inevitable penalty was rolled coolly down the middle by Eden Hazard with Lindegaard going to his left. As the Chelsea fans toasted their injury-time rescue, the referee blew for full time.

Sturridge had two chances to put the hosts in front in extra time before he actually did while Rafael’s effort in between was held by Cech. When the Chelsea forward’s decisive strike finally came, it was teed up - agonisingly from a United point of view – by Wootton’s header back towards Lindegaard falling short. Sturridge collected and carefully took the ball around the United keeper before calmly making it 4-3 to Di Matteo’s men.

Wootton’s woes might have been compounded by Keane pulling down Sturridge just before half-time in extra-time, but Mason showed mercy and presented a yellow card rather than a red to United’s other young centre-back. Luiz smashed the free-kick against the bar and although it struck Lindegaard’s back on the way down, the Reds remained in the game. The same was true when the Danish keeper’s left leg stopped Moses from claiming a goal he probably deserved for his endeavours.

Lindegaard was beaten for a fifth time when Hazard opened up the defence with some dazzling skills and played in Ramires to round the Dane and leave him standing. That goal ultimately proved decisive, with Giggs’ late penalty reducing arrears to 5-4 after Chicharito was fouled by Aspilicueta. The Reds are out but can’t be too down after winning the more important, previous meeting in the league and pushing Chelsea all the way in this cup cracker.