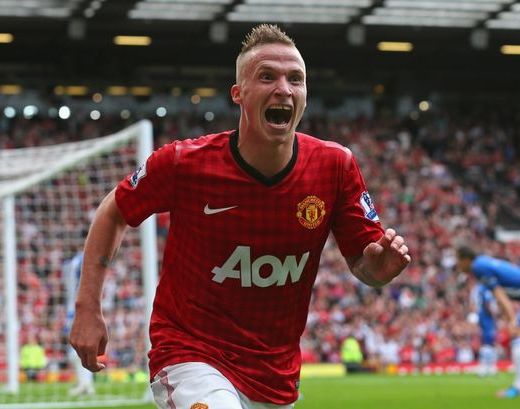 Alexander Büttner has gone from playing alongside Ryan Giggs and co. on computer games to training with the real thing, and the Dutchman still can't quite believe how his life has changed.

The 23-year-old left-back arrived from Vitesse Arnhem as a virtual unknown in the summer as cover for Patrice Evra and made an immediate impact on his debut against Wigan in September, with an impressive display and goal.

While Evra remains first choice on the left side of defence, Büttner insists he is just enjoying being able to learn from players he has admired from afar for so long.

"I feel so lucky to be here and it’s great to play with so many great players like Giggs and Scholes – before I came I used to play with them on FIFA [the computer game], now I get to train with them every day!" he told the Cluj edition of United Review.

"We have so many great players in the squad and the fighting spirit is fantastic. Everybody works so hard.

"Look at someone like Wazza – he plays no.10 but he is everywhere on the pitch. He’s a great player for the team. The thing that makes United so special is the fact we have so many top players, not just in the first eleven but the on the bench as well.

"I am learning from everyone every day and I hope I can become a better player here."