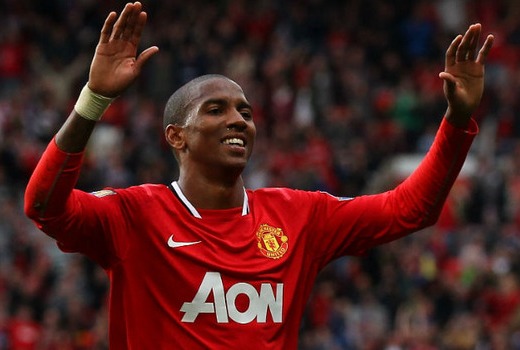 The 26-year-old England winger, who wore the colours of Watford and Aston Villa before joining the Reds last summer, is sure his game has benefitted from training and playing alongside the vintage pair, who continue to excel for United in spite of their advancing years.

In an exclusive interview with MUTV, Young also expressed his delight at Friday's news that Giggs has signed a one-year contract extension with United, effective until the end of the 2012/13 season.

“It is brilliant for him, the club and the fans that somebody of his calibre is going to continue at his age,” said Young, in reference to Ryan's new deal.  “He has been brilliant throughout the years that he has played and is somebody that I admire and look up to.

“Obviously players like Giggs and Scholes have experience from their many years at the club and when they talk, you listen because they have been there and done it.

“They have won so many titles and medals and have achieved so much in their careers. If I can achieve part of that I’ll be thrilled. I'd say I'm an experienced player at 26 but I still listen to the seniors and want to improve.”

Young got off to a flying start to his Old Trafford career, bagging his first goals for the club in the 8-2 mauling of Arsenal before impressing in other big domestic and European fixtures. The England international then sustained an injury during the 5-0 rout of Fulham before Christmas and didn't appear again until last weekend at Chelsea. Now fully fit and raring to go, Young hopes to recover his early-season sparkle.

“For any player, you don’t want to be injured and for me, it’s the hardest thing ever," Ashley admitted. "I am back now and want to get myself going. I started well at the beginning of the season and I want to get that form back and continue it for the rest of the season."

After playing his first game for two months from the start at Stamford Bridge, it was understandable that Ashley was substituted early in the second half. At that stage, United were 0-3 down but as Young watched on admiringly from the bench, the Reds famously rallied to draw 3-3.

“We have got that never-say-die attitude, even if we are three goals down like we were at Chelsea. I think we could have gone on and won the game at Stamford Bridge," said Young.

"The spirit that we have shown throughout the season has always been there. From when I first joined the club you could tell there was a team spirit that went from the dressing room out on to the pitch.

“At my previous clubs that has not been the case but I think you should always play to the final whistle, knowing you are going to create more chances. Until the final whistle goes there are always chances to be created and I think that’s part of United's philosophy.”