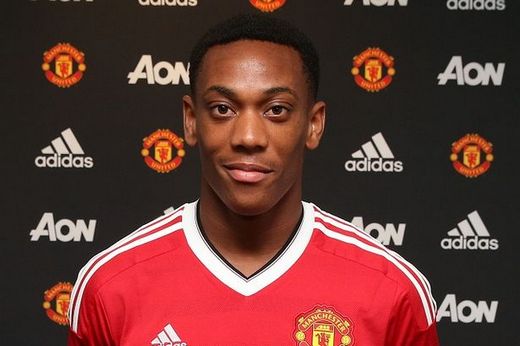 Manchester City were among the queue of big spenders ready to swoop for Manchester United’s shock transfer deadline day signing Anthony Martial forcing the Reds into sealing the deal early.

Ryan Giggs had scouted the 19-year-old French forward for United boss Louis van Gaal over the past 12 months and the Old Trafford assistant manager gave the thumbs up to the Monaco prodigy’s potential on his missions but the ‘one for the future’ became the man for today as United realised a group of big names were circling and were ready to pounce.

As well as City other money-laden clubs wanted Martial including Chelsea, Paris St Germain and Barcelona and all of them were looking to snatch him up next summer.

All four wanted to secure the forward on a pre-contract agreement in January. Despite the teenager having signed a contract extension at Monaco in July if the French club had agreed a fee with the Blues or any of the other suitors they could have secured Martial's signature in the New Year ahead of a signing next summer.

United, who had similarly brought forward the signing of Memphis Depay last May because PSG were on the brink of snapping hi up from PSV Eindhoven, believed Martial’s ability was too good to lose.

The swift wrapping up of Martial’s arrival mirrors United’s early capture of Cristiano Ronaldo in 2003 when the Reds paid Sporting Lisbon a then premium price of £12.5m for the teenager.

The Reds had got wind of the fact that Juventus, in particular, were close to landing the future World Player of the Year.

Former Juve director, Luciano Moggi revealed in 2013. "We had everything signed with Sporting Lisbon," said Moggi.

"We had agreed a swap deal with Cristiano in exchange for Marcelo Salas, who accepted the move, went to Portugal, but then backed out.

"That’s when Manchester United intervened. They were offering millions and we had no money to compete, so I had to cancel the contract. Cristiano Ronaldo could have joined Juventus when he was 18."

Ex-Juve chief Franco Ceravolo backed up that claim this summer.

Folklore has it that Ronaldo was signed after a dazzling display against United in a pre-season friendly in Lisbon in ‘03 with Sir Alex Ferguson urging the then chief executive Peter Kenyon to land him immediately after that 90 minutes for fear Europe’s elite would see the one-man show and move in rapid.

But the top club’s, including Juventus, were already on Ronaldo’s case. However, United had it all ready to sign the deal off before that Ronaldo precocious masterpiece in the inaugural match at the Alvalade XXI Stadium and the clamour from United’s players on the plane home from Portugal to sign Ronaldo.

Giggs was among those enthralled by Ronaldo and now his seal of approval has been behind the Martial arrival.