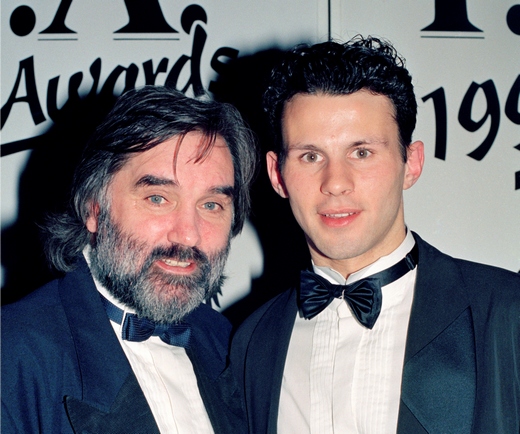 "George Best took the game to places it has never been before. Current-day players owe him a big debt."

So says David Sadler, who lived in digs with the Manchester United legend and ended up being part of the same European Cup-winning team in 1968. Sadler was joined by Paddy Crerand at the official opening of the new 'George Best - Icon' exhibition at the Old Trafford Museum and the MUTVpundit is in no doubt his old pal was the greatest player of all time.

Even Pele admitted it, as we were reminded on more than one occasion, although Paddy's revelation that the brilliant Brazilian wore size-four boots was perhaps a bigger shock.

Anybody fortunate enough to watch the Northern Irishman in his pomp will testify to his gifted genius and his lasting legacy is of a player who transcended sport and became a symbol for an entire era. The pioneer for the commercial cross-over that is taken for granted and oft-exploited these days.

Following the drive home from the launch of the exhibition, produced with assistance from the Best Chances charity, I watched the Life of Ryandocumentary on ITV. Having discussed Best earlier in the evening, it was impossible not to recall the huge debate over whether the Welshman could become as great as the late winger when he first broke through at United.

It is clear Ryan Giggs embodies everything about Manchester United. You get the impression if you cut him open, he would have MUFC stamped through him like a stick of rock. I must admit the realisation that I was almost certainly watching him play competitively for the last time, against Hull City last month, hit me hard.

Seeing him warm up in preparation for a final substitute appearance while continually observing the action like a manager was the most surreal of experiences. It was almost like one of the Doctor Who regenerations where the future was fighting to get out of the present.

I'll probably be sentimental again when the new season dawns without Giggs at no.11 and allow myself another opportunity to take stock of his achievements. The boy mischievously nicknamed 'George' as a 17-year-old by his Wales team-mates, including Mark Hughes and Clayton Blackmore, was supposed to be growing up in the shadow of the great man. Would he be able to avoid the pitfalls that come with superstardom? Many felt it was impossible.

Best comparisons
"I know there will be a Ryan Giggs Exhibition in the future when I will tell my son about my pleasure at witnessing this superstar's entire career. I am certain I will be talking in the same reverential tones as those who still hail George Best's genius and describe the thrill of watching him in the flesh."
- Adam Marshall, ManUtd.com

Best, who would have been 68 in May, was clearly a magical talent and my father and anybody from that generation insists he had to be seen to be believed. He was a key figure in the European Cup triumph at Wembley but was clearly unlucky that it seemed to be the end of the road in some respects. It was an understandable realisation of a dream for Sir Matt Busby and the club after the horrors of Munich. As Best was keen to point out, he felt his ambition was not being matched in the subsequent years and, of course, he left Old Trafford six years later, having won two First Division titles when his skills surely deserved many more.

Ryan was certainly fortunate to be part of a number of classic sides moulded by Sir Alex Ferguson. The haul of 13 Premier League winners' medals is staggering but he was also able to follow up the 1999 Champions League triumph, which again was a fulfillment of a primary goal of the manager, by lifting the trophy again some nine years later, even scoring in the Moscow shoot-out in customary ice-cool fashion.

And still he went on. Starting in both the 2010 and 2011 finals when only an exceptional Barcelona team deprived him of even more glory at the highest level of the club game.

It is difficult to compare players from different eras and there are an infinite number of attributes that can be applied to the perfect footballer. As we ran out of ways to register our awe and admiration for Giggs' longevity some time ago, maybe things can become overlooked in the moment with thoughts inevitably switching to his new incarnation as Louis van Gaal's assistant.

However, I know there will be a Ryan Giggs exhibition at the Manchester United Museum in the future when I will be telling my son about my pleasure at witnessing this star's entire career unfold from the first time I saw him captain England Schoolboys. I am certain I will be talking in the same reverential tones that those in attendance last night hailed Best's genius and described the thrill at watching him in the flesh.

The only problem may be if the 40-year-old donates his entire medal collection to the Museum. They would probably need to build a new wing within the Sir Alex Ferguson Stand to house it.