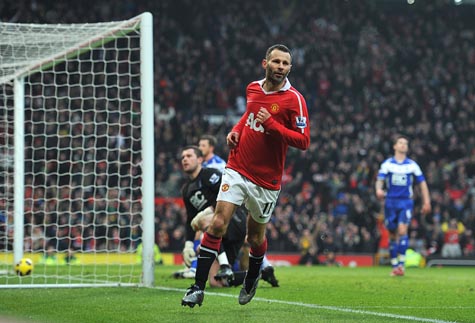 Liverpool fan Adam Hammill has kicked off the countdown to Wolves’ showdown with Manchester United by admitting “Ryan Giggs is the best.”

United’s visit to Molineux tomorrow means Hammill could go head to head against a fellow winger he grudgingly admits is his role model.

He said: “It hurts me to say it a little bit as a Liverpool fan, but you can’t do anything except look up to Ryan Giggs.

“He’s got to be one of the best, if not the best, winger the Premier League has seen. Some of the goals he’s scored have been incredible.

“I look to him and aspire to be like him and to play as long as I can as well. If I could have even a little bit of the success he’s had then I’ll have a good career.

“You have to take your hat off to the likes of him and Paul Scholes for what they’ve achieved.”

As well as Giggs and Scholes, Hammill also looks up to Michael Owen, who controversially became a Red Devil after starring for the Reds.

The Wolves winger said: “I grew up watching Michael Owen at Liverpool as well – he was a hero of mine – so it would be nice to come up against him as well.”

But Hammill insists he will not be star-struck tomorrow.

He said: “That goes out of the window. You have respect for players like that but we want to be getting among them and pressing them and not giving them space.

“When we get the ball, we’ve got to be confident, take our time and pick our passes.”

Hammill has been facing United since he was a nine-year-old playing for Liverpool’s junior teams and is understandably thrilled at the prospect of facing the Reds’ arch-rival.

He said: “You’ve got to relish facing Manchester United – I can’t wait.

“For a Liverpool fan it’s always a massive game. It always was at Liverpool, even from under-nine level upwards and I’ve played in a lot of those games.

“I played against them once for Barnsley in the Carling Cup and, while they didn’t play a full strength team, you could see the quality they had, particularly in the final third.

“They just had that bit extra in what was an otherwise even game and won 2-0.”

Hammill already looks at home in the Premier League. The 23-year-old dazzled at Bolton on Wednesday night when Wolves went down to a 1-0 defeat.

But the Scouser reckons he is only going to get better.

“With a little bit more composure I think I’ll be able to create some chances and also chip in with some goals. I’m confident in my own ability but I’m also very down to earth.

“I didn’t think I’d struggle but I also knew it was never going to be easy. I just wanted to work hard and show the gaffer, players and fans what I can do and that I can be trusted and composed on the ball.

“With experience I think there’s a lot more to come. I can take a lot from that game and also need to work more on my fitness.

“But with games that will come.”

The Wolves wide man witnessed a brutal lesson of how cruel the Premier League can be at the Reebok Stadium when Ronald Zubar’s suicidal back-pass was seized upon by Daniel Sturridge for the only goal in the third minute of injury time.

Hammill said: “For 92 minutes we played really well and had created a few chances. We were unlucky with a few things against us.

“I thought I should have had a penalty and then Kevin Doyle’s shot which deflected onto the post came out the other side of Stephen Ward.

“Then there was the mistake for their goal. The vital thing when anyone makes a mistake is to learn from it.

“It seems that in the Premier League you just have to say focused for the whole 90 minutes, often 96 minutes, because if you’re not you get punished. Zubar thought the goalkeeper was there and he wasn’t, but we all make mistakes.

“We’re all human and it’s how we bounce back from it that counts.”

Hammill insists Wolves cannot afford to dwell on their mistakes and must put the error behind them.

He said: “We’ve just got to take the positives out of the performance and move on.

“We need to start picking up points now because, while we’re playing well, it’s a results business and playing well won’t keep us up.

“The lads have already picked up some great wins against Manchester City, Liverpool and Chelsea. It’s getting results against teams around us which is important.

“We need to see games out and be ruthless in front of goal.”