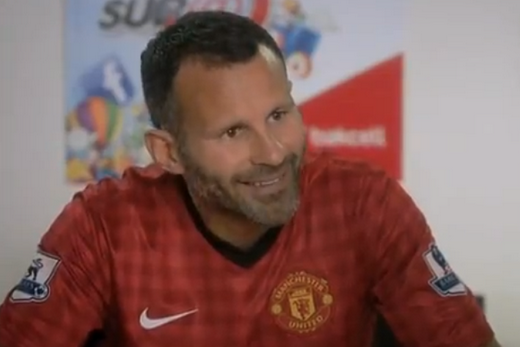 “How would you like to be Ryan Giggs?"... Not your usual day at the office.

You’re sitting at your desk, nonchalantly swinging back and forth in the swivel chair, hands relaxed behind head waiting for the next drone of a customer to sit down and confront you with their various grievances. Sound familiar?

It’s then that the boss notices this slack attitude and steps out of the boardroom to reprimand you. He blows a whistle (and this is where it starts getting weird….), you rear up suddenly and discover in amazement that rather than the traditional shirt and tie, you’re wearing the full Manchester United home kit.

You then turn around to find none other than Sir Bobby Charlton in the doorway fixing you with a steely-eyed and somewhat menacing glare.

Now, this was not a dream. It was just one of those odd occasions that make life, and journalism it would seem, such a rich tapestry.

This occasion was in fact the shooting of an advert for Bakcell, one of the leading tele-communications operators in Azerbaijan and, as reported by MM this week, a new corporate sponsor for Manchester United FC.

I had attended the shoot in an attempt to try and glean a little information about the sponsorship deal and perhaps take the odd picture or two should any MUFC stars have been on hand for the filming.

As it turned out, the player’s shoot had been done at their Carrington training ground the day before. Somewhat deflated, it was as I was noting down a few details to return to the office with when I was asked the startling question; “How would you like to be Ryan Giggs?”

Now I cannot lie. Being a keen footballer and nippy left-winger in my heyday to boot, Gigg’s career and medal haul was unsurprisingly something I had always admired. And whilst I may have longingly compared his talent and lavish lifestyle to my somewhat more meagre sporting achievements subconsciously over the years, I had never actually been asked the question whether I would like to step into the Welsh Wizard’s shoes.

And yet here was the question again, repeated with greater urgency this time. “So, will you play Giggsy or not?”

Having briefly considered my options, I hesitantly asked what the role would involve. “Oh not much”, was the reply, “although we’d obviously have to make you look like him”. Hmmm….

Now let’s get one thing straight. I look nothing like the afore-mentioned Mr Giggs. His chiseled jawline is something that has deserted me somewhat since the age of 30 came and went, and the small MUFC home kit that I was asked to squeeze into was a little figure-hugging to say the least.

However, as you will have guessed by this point, I had crumbled under the pressure of the Assistant Director’s pleas and was now sitting for what turned out to be two hours plus in the make-up chair.

As I sat there having my beard trimmed and shaved, my sideburns darkened and greyed around the edges, and my hair severely shorn, I couldn’t help but wonder what the reaction would be when I returned home to my better half. My hope, perhaps optimistically, was for pleasant surprise….

It was as I was having my fears placated by the charming make-up team that I actually met the extra who had originally been booked to play Mr Giggs. Apparently, due to other another acting commitment, he couldn’t afford to allow his hair to be cut ‘that’ short.

Oh dear. ‘That’ short? I shut my eyes and gulped as the clippers continued to deprive me of my back and sides.

Anyway, once the transformation was complete I made my way on-set. The basic premise of the advert was that various MUFC stars, including Messrs Ferdinand, Evra and Giggs, are working in a Bakcell call-centre, annoying boss Bobby Charlton with their unprofessional and adolescent behaviour.

This was apparently what I’d have to recreate. Seemed like a doddle to be fair.

Surprisingly, as the scene was set up, no-one seemed eager to listen to anecdotes from my child-acting past as I waxed lyrical about my starring roles in the Jimmy Nail detective hit ‘Spender’, and the oft-forgotten BBC children’s drama series ‘Earthfasts’. It seemed I wasn’t coming across as a pro….

As the filming panned out, that reputation appeared to be justified. Despite a limited role where my only piece of ‘acting’ was to lean back and put my hands behind my head (it was hardly the stuff of Laurence Olivier), I managed to ruin at least one take with my amateurish actions. Who would have thought there were so many wrong ways to sit in a chair?

Anyway, we got the scene ‘in the can’ and I have to say it was a surreal but enjoyable experience having Sir Bobby Charlton blowing his whistle at me for disobedience in the workplace. As call-centre bosses go, I guess he’s up there with the best of them.

Sir Bobby also mentioned that he found ‘acting far harder than football’. I must say I’m inclined to agree. Put it this way, I won’t be applying for my Equity card just yet....

So there you have it, my unexpected morning as Giggsy. I initially had high hopes that the role may catapult me into some kind of ‘X-Factor’ style super-stardom, but I have since been told that the commercial will only be shown on Azerbaijan TV.

And as it turns out, this lack of UK exposure won’t be the major barrier to any new-found fame and fortune, as apart from a couple of milliseconds where the back of my head may or may not just be visible (the frame is so fleeting I can’t really tell, and believe me, I’ve tried) my stellar performance appears to have been consigned to the cutting room floor.