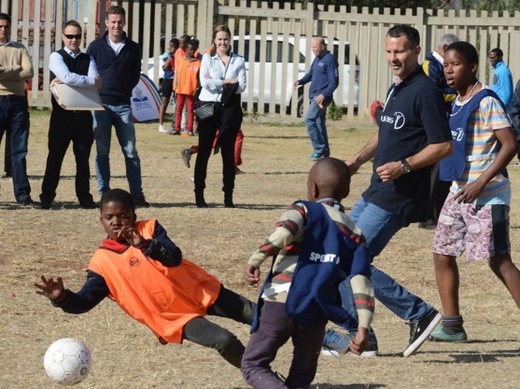 We are really excited to announce Manchester United’s Ryan Giggs is the newest Laureus Ambassador.

He was welcomed to the Laureus Family by fellow Ambassador Lucas Radebe, the former South African national team captain, and was in action straight away meeting young people at the Laureus-supported Sport for All project in Katlehong, near Johannesburg.

Ryan said: “I am delighted to be named a Laureus Ambassador and would like to thank the members of the Laureus World Sports Academy for inviting me. I have always believed, like Laureus, that sport can change people’s lives, so I am looking forward to doing what I can to help.

“My dream as a youngster was always to play for Manchester United and I was lucky enough to be able to do that. It was great to meet the boys and girls at the Sport for All project and I was able to tell them how important it is for them to have their own dreams and hopes and how they must work hard to achieve them.”

Ryan is one of the world’s greatest footballers. He played a record 963 times for Manchester United, won 13 Premier League winner’s medals and the Champions League twice. Later this year Ryan starts a new career as Assistant Manager of Manchester United under Louis Van Gaal,

The Laureus Sport For Good Foundation has contributed funding for more than 500 orphans and vulnerable children to attend sports coaching with Sport for All, in poor and underdeveloped township areas in South Africa.  Sport for All is currently based in 16 locations around the country.

Laureus Ambassador Lucas Radebe, who played for Kaiser Chiefs and Leeds United in England, was capped 70 times for South Africa. He said: “It was a great honour for me to welcome Ryan to Laureus, His reputation in football is enormous and it is so in keeping with his human values that he wanted to come along to Katlehong today. The kids loved meeting him and, on behalf of Laureus in South Africa, I thank him.”

Laureus World Sports Academy Member Sir Bobby Charlton, a Director of Manchester United, who has known Ryan Giggs throughout his career at Old Trafford, said: “I first saw Ryan at our Salford training ground. I saw a young boy pick the ball up, dribble past four or five players and then hit a left foot shot towards the goal. I said to Alex [Ferguson] ‘who the hell was that?’ He said: ‘It’s a young lad called Ryan and we think he’s going to be play for us next year’. That was a about 25 years ago and I am so proud of what he’s done for Manchester United and for football in general. On behalf of the Laureus Academy I am thrilled that Ryan has agreed to help us with our charity work and I am personally delighted that he is joining us at Laureus.”

At the project visit at Huntersfield Stadium in Katlehong, Ryan joined the young people in various activities which demonstrated the sport and life skills work which they do at Sport for All. He also took time out to talk to the participants and answer their questions.