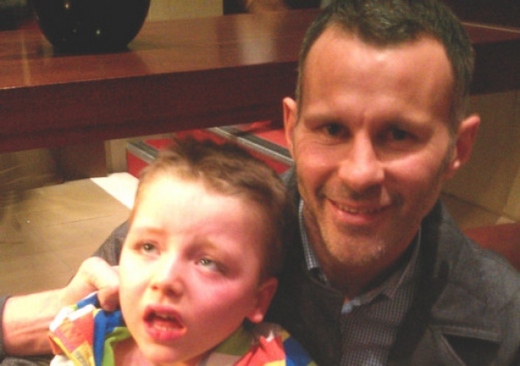 FRESH from making the 999th appearance of his glittering career, Manchester United’s Ryan Giggs took time out to show his support for Joseph’s Goal.

The 39-year-old football legend met young Joseph Kendrick this week and is now in possession of his very own light blue wristband.

Joseph is the son of the Evening Post’s Latics correspondent, Paul, and through his dad’s connections to the sporting world, the brave youngster has met superstars such as Jessica Ennis and Sam Tomkins.

And both Latics and Warriors’ captains Gary Caldwell and Sean O’Loughlin are ambassadors for the charity, as well as a host of other star players.

Paul, 36, said: “The support we have had has been amazing and to have backing from such greats from the sporting world is overwhelming.

“Giggsy was very nice to us, he is a great bloke and was chatting away to myself, my wife Emma and youngest son, Sam.

“He was asking lots of questions about Joseph’s Goal and wished us all the best for the future.”

Follow @josephsgoal on Twitter, or visit www.josephsgoal.org. To make a donation to Joseph’s Goal, with every penny going to NKH research, please visit www.everyclick.com/josephsgoal