Sir Alex Ferguson requested that his Manchester United players express themselves in his final game in charge at West Brom and they certainly did that in an attacking sense during an unbelievable 5-5 draw.

With the sun shining on the scene of his footballing farewell, the Scot saw his side throw away 3-0 and 5-2 leads as history was made in the Black Country. It was the club's first 5-5 draw since 1895.

Shinji Kagawa, Alex Büttner, Robin van Persie and Javier Hernandez all scored, and Jonas Olsson put through his own net, but a hat-trick by substitute Romelu Lukaku helped the Baggies ensure Sir Alex's career ended on a slightly disappointing note.

The champions came out to a guard of honour while both sides applauded the manager onto the pitch amid a tumultuous atmosphere inside the ground as the stage was set for an occasion befitting the great man’s last-ever stint in the dug-out. 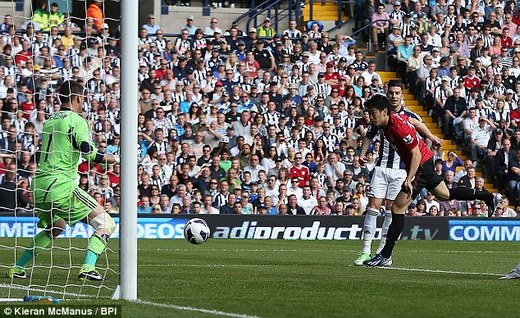 With the packed away end roaring the Reds on, some of the football on show was simply sensational. As the ball was worked out of defence superbly in the sixth minute, Büttner's pass into the right-hand channel looked overhit but Hernandez chased it down and supplied a pinpoint cross for Kagawa to head down and past former United keeper Ben Foster. 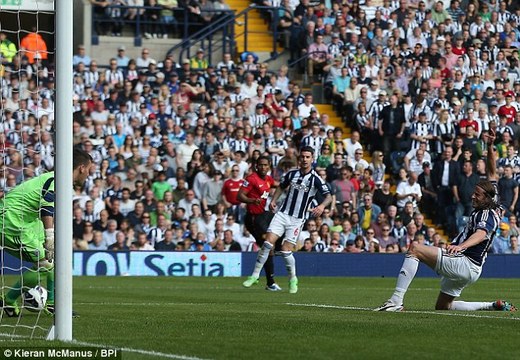 Three minutes later, Kagawa ignored a stumble from the nearby van Persie to feed Antonio Valencia out wide. The raiding wing-back smashed the  ball across goal and Olsson poked it past Foster to double the lead - a similar own goal to the ones netted in two of the past three matches with Albion by Steven Reid and Gareth McAuley.

The Reds were rampant and Olsson was relieved to see another deflection go behind for a corner when getting in the way of a van Persie chip while Phil Jones' shot looped up for Foster to catch. Hernandez's general play was superb but his finishing touch, unusually, was lacking as he got a free header all wrong when captain Michael Carrick swept the ball across. 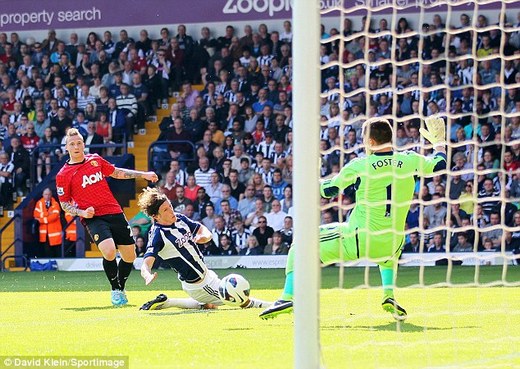 On the half-hour mark, Carrick's pass was expertly dummied by Hernandez and Tom Cleverley invited Büttner to bury a low drive into the far corner of the net for a well-worked third. There was dissent from the home fans about the manner of their team's collapse and it seemed to spark their players into life with Shane Long heading over from a rare opening.

However, Hernandez really should have got his name on the scoresheet when an expansive pass by Anderson was volleyed first-time into the Mexican's path by Valencia but the shot lacked accuracy and the Baggies escaped. It had a major bearing on the half-time situation as Morrison, a scorer against United in the past, beat Jones to tuck Graham Dorrans' low cross past Anders Lindegaard for 3-1.

Both sides threatened to score again in the five minutes before the break. Valencia and Cleverley set up Hernandez and, although his shot was straight at Foster, the ball cannoned back goalwards off McAuley to force the keeper into making a stunning tip-over. The home side could, somehow, have ended the half only a single goal in arrears as a Jones lapse let in Morrison but Jonny Evans made an excellent saving challenge as Long looked certain to fire home. Steve Clarke pepped up his attack with the introduction of Chelsea loanee Lukaku for the second half and it gave the home fans some hope of a comeback.

Indeed, within five minutes, the Belgium international was allowed to pick the ball up outside the box and roll a softish, but accurate, shot that Lindegaard could only push into the net - much to the Dane's frustration. Yet any thoughts of United ending Sir Alex's reign by relinquishing a three-goal lead looked to initially have been extinguished. 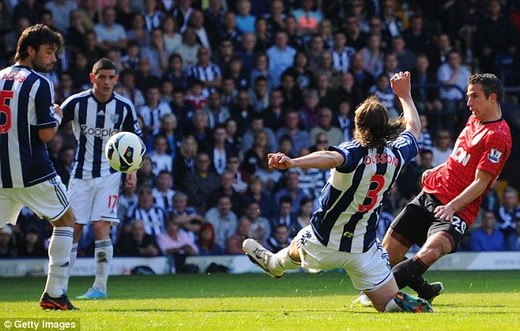 The Reds' response was emphatic with Valencia again to the fore, teeing up Anderson for a shot that Foster saved before leading the charge down the right to flash over another low cross that was placed high into the net by van Persie. It was the Dutchman's 26th league goal for the club and 30th in all competitions from an outstanding debut campaign.

Hernandez saw McAuley snuff out another chance and, after Valencia made an important clearance at the other end, Ryan Giggs came on to join the cavalry. The veteran skipped down the left wing to meet a Kagawa pass as a breathtaking move was capped off by a perfect centre allowing  Hernandez to tap in his 50th goal for the club and just reward for his perseverance. 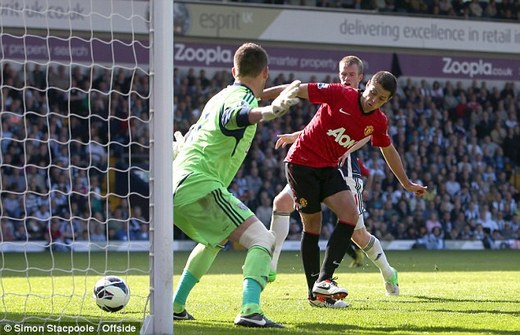 West Brom should have pulled another goal back when Olsson contrived to sky an opportunity from a couple of yards out while Lukaku hammered a free-kick wide and skimmed the side-netting from another promising position. The warning signs were there.

Although a Büttner cross hit the bar and Giggs chipped onto the top of the net, most of the attacking momentum was with the Baggies. However, nobody could have forecast the crazy finale. Dorrans and Billy Jones had efforts before danger-man Lukaku ran onto a Markus Rosenberg through ball to notch his second goal. Within a minute, from the next attack, Youssouf Mulumbu strode through unchallenged to touch in a Jones pass and the comeback was very much on.

Paul Scholes picked up a booking as he made his final appearance as a substitute while Rio Ferdinand was introduced in a bid to stem the tide. However, the veteran centre-back was unable to clear when Lukaku threatened again and the burly striker was able to bundle the ball over line from virtually a horizontal position to sensationally level at 5-5.

It was not the parting result Sir Alex would have wanted, or deserved, but there was entertainment all the way. As he waved farewell to the away end, he may have reflected that any more matches like this would not be good for his blood pressure!