A cruel deflection handed Arsenal a late goal and an equaliser at Old Trafford on Sunday, as Manchester United ended the home campaign with a 1-1 draw.
The Reds dominated the first half and went into the break 1-0 up courtesy of a stunning Ander Herrera strike. Louis van Gaal's side were no less impressive for long periods after the interval, too, and will feel aggrieved that Theo Walcott's cross on 82 minutes ended up in the back of the net via a deflection off Tyler Blackett.
Still, the way United controlled large parts of the game will have pleased the manager and is further proof that this squad has what it takes to compete with the best sides around. An injury to David De Gea, which forced the goalkeeper off just before Arsenal scored, was less pleasing.
The boss had to make two changes from the side that beat Crystal Palace last weekend, with Radamel Falcao and Marcos Rojo coming in for the injured Wayne Rooney and Luke Shaw. In Rooney's absence, Chris Smalling wore the armband for the first time and the central defender looked composed from the first whistle. 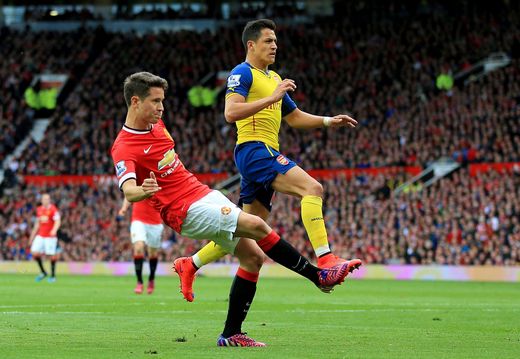 It was one-way traffic from United in the opening 15 minutes. Ashley Young, Falcao, Smalling and Juan Mata all blazed efforts goalwards, with Mata's free-kick forcing Gunners goalkeeper David Ospina into a smart save. Arsenal then began to exert some pressure of their own, although any momentum they may have gained was eradicated in spectacular fashion on 30 minutes when Herrera volleyed home first time after superb work from Young down the left. 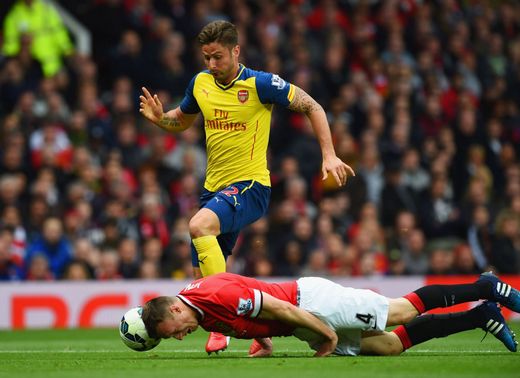 Daley Blind would have doubled United’s advantage on the stroke of half-time had his shot from a cleverly-worked free-kick not struck Smalling on its way into the bottom corner. Van Gaal’s men were perhaps unlucky to go into the break just one goal to the good. Indeed, Arsenal failed to trouble David De Gea in the first 45 minutes – the first time they’ve failed to land a shot on target in the first half of a Premier League fixture since 2004.
There was no let-up in tempo at the start of the second half, either, with United flying out of the traps in search of a second goal. A quickly-taken free-kick almost yielded reward, while Ospina had to ensure he was fully behind Marcos Rojo’s long-distance drive. 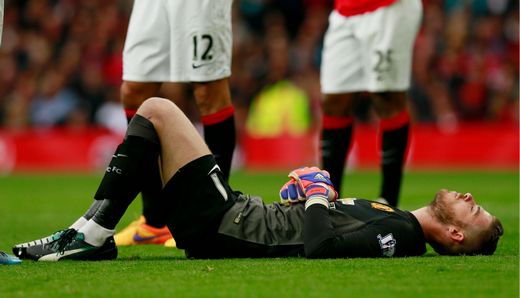 Van Persie replaced Falcao just after the hour mark before De Gea was finally called into action, spreading every inch of his frame to save Olivier Giroud’s close-range effort. Marcos Rojo then made a goal-saving clearance after Aaron Ramsey dinked the ball over De Gea. But both Rojo and De Gea soon left the pitch injured – the United goalkeeper was hurt after coming to punch clear an Arsenal cross. That paved the way for the introduction of Tyler Blackett and Victor Valdes – the latter making his Reds debut – but the pair were unfortunate to both be involved for the visitors' 82nd-minute equaliser. 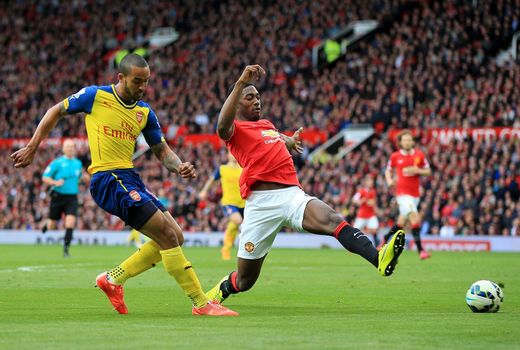 Blackett attempted to block Walcott's low cross and the ball skipped up off the defender's boot and into the far corner past Valdes, who was moving off his line to cover the cross. It was tough on the Reds after dominating for so long, but the performance provided plenty of positives, even if the final scoreline is one that will be viewed with regret.

#MUFC ended the home campaign with a hard-fought 1-1 draw against Arsenal, followed by a lap of honour and a speech from...