The most decorated player in Premier League history added yet another accolade to his ever-growing collection on Tuesday as Ryan Giggs became the latest recipient of the Legend of Football award.

Manchester United's assistant manager collected his gong in person at the HMV Football Extravaganza, an annual event designed to bring the football and music communities together to raise money for charity Nordoff Robbins.

Giggs, who hung up his boots at the end of last season to become Louis van Gaal's No 2, is the fourth United legend to win the award, following in the footsteps of Sir Alex Ferguson, Eric Cantona and Denis Law. 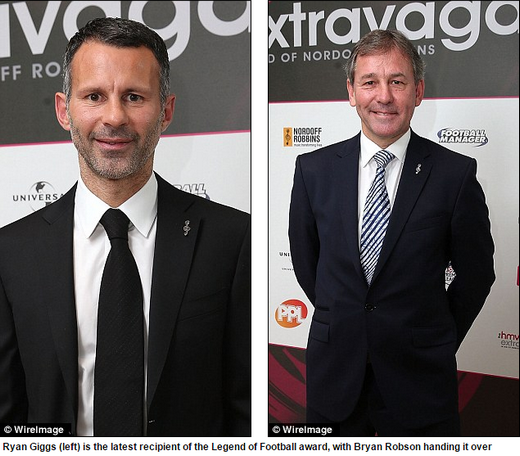 Speaking ahead of the event, Giggs said: 'It's an honour and privilege to be presented with the Legend of Football Award, particularly when I look back at the list of previous winners.

'I am looking forward to the event, celebrating with friends and colleagues and raising money for Nordoff Robbins, which is a really incredible cause.'

The 40-year-old was joined on stage by his friends and fellow members of the Class of '92 Paul Scholes, Nicky Butt and Gary and Phil Neville, each of whom paid tribute to his extraordinary career at Old Trafford.

But it was former United and England captain Bryan Robson who handed over the award to Giggs, a year after Brazil legend Pele was honoured in the same way.

And although he wasn't there in person, ex-Red Devils manager Ferguson appeared on a big screen to say some warm words about his former player.

Despite the imminent return of Premier League action this weekend, Giggs and a host of managers found time to visit the London Hilton on Park Lane to enjoy the ceremony and show their support for the specialist music therapy charity.

Guests were treated to a performance from Welsh rockers Stereophonics before being given the opportunity to bid in a fundraising auction with a variety of football-based prizes up for grabs, including a kids training session with Giggs at Carrington and a behind-the-scenes experience at the Emirates for Arsenal's clash with West Ham on March 14.

Now in its 19th year, the Football Extravaganza has raised more than £6million for Nordoff Robbins.