“It’s a time to show guts and courage,” said Gary Neville in the Sky Sports studio upon seeing the swelling over Antonio Valencia’s left eye.

It was an admirable if disconcerting effort for the Manchester United winger to play on for so long – almost to the 77 minute mark – after suffering a serious blow to the head in the early stages. But there’s more than one type of bravery in football. And Ryan Giggs showed plenty of the kind that really counted on Wednesday evening at Old Trafford.
David Moyes’ United have wilted under pressure at various times this season. The late heroics of the Sir Alex Ferguson era have given way to late equalisers against Southampton, Cardiff and Fulham. There were even late defeats at home to Everton and Swansea. Most spectacularly, there was the Capital One Cup semi-final shootout against Sunderland and the surrender to Liverpool.
Confidence then, has been an issue. Nerves are fragile. But that’s not such a problem when you’re approaching 1000 appearances for the club with 13 Premier League trophies and a couple of Champions League medals to your name. Crucially, Giggs is a player not afraid to risk the ire of the crowd with an ambitious pass. He has earned the right to take those chances. 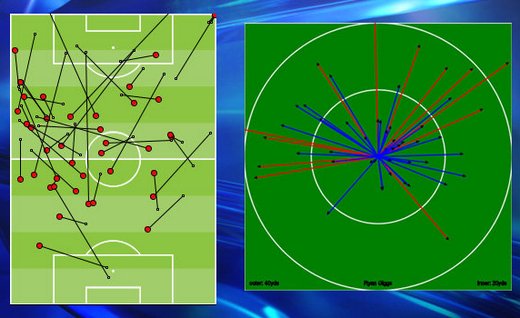 Ryan Giggs passing locations and directions against Olympiakos - It gave United penetration
The veteran Welshman had a sub-70 per cent pass completion rate in the first half – among the lowest of anyone on the park. He surrendered possession of the ball 14 times in the match, occasionally trying to be too cute with a lofted ball to a team-mate. There was the odd groan, of course. But these are broad shoulders and this is a man with complete belief in himself. Giggs never eschews the opportunity to play that pass.
There was early evidence of its potency when he threaded a delicious ball through for Danny Welbeck to run onto. Then there was a piercing cross that Wayne Rooney headed against the foot of the near post. The casually stroked pass out wide to the full-back has become a familiar trait of this United team under Moyes, but Giggs is prepared to look forward with real purpose. “They had somebody in the middle of the park with the ability to pass the ball forward,” said Neville. “United haven’t played too many passes forward in the last few weeks.”
Sublime
Importantly, with Giggs in the team, the strikers knew that the through-ball was now a possibility. So when the ball was with him they got on the move. That’s what happened for the sequence of play that led to the opening goal when a sublime long-range pass found Robin van Persie in space. “He doesn’t make that movement if the ball’s not on Ryan Giggs’ foot,” said Jamie Redknapp. One dumb Jose Holebas foul later and United had the penalty - and the momentum. 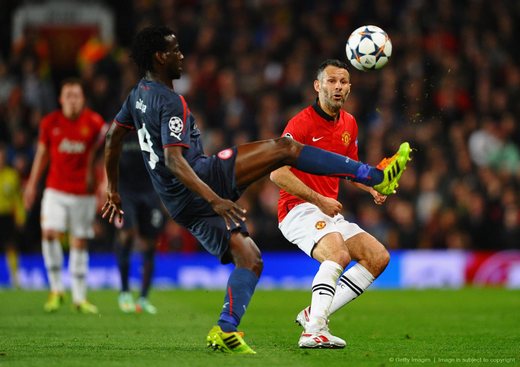 Ryan Giggs in action against Olympiakos
It’ what United have been lacking and it’s been what their star forward has been missing too. While Neville argued that Giggs had “enabled Van Persie to get in the match”, Carragher added: “We’ve been criticising Van Persie a lot for not a lot of movement. But it’s the fact that he’s got someone who’s going to play that ball and the confidence to play that ball. Would Marouane Fellaini have played that ball? Would Michael Carrick? Tom Cleverley? Giggs has just come in the side and – bang – 40 yard pass straight onto his chest.”
It was a similar story for the second goal. A quick glance up and a clipped ball behind the Olympiakos defence – this time finding Rooney. His subsequent cross found striker partner Van Persie to level the scores on aggregate with a fine first-time finish beyond Roberto. Two goals and Giggs was the catalyst for them both. As Moyes so succinctly put it afterwards: “He’s a freak.” 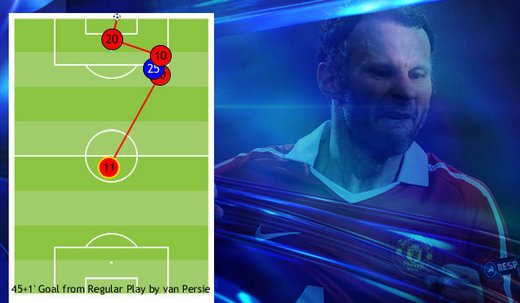 Ryan Giggs was the catalyst for Robin van Persie's second with a lofted ball to Wayne Rooney
Of course, as Carragher alludes, it’s somewhat damning that United still require a man the wrong side of 40 to come to the rescue. At a time when contemporaries such as Dennis Bergkamp or even the rather younger Thierry Henry are admiring their statues outside the grounds that made them famous, Giggs is more than a symbol of the glory days. He’s a practical benefit to the team and busy showing what’s been missing while he’s been sat on the sidelines throughout all but 10 minutes of February and March.
But perhaps the recriminations are for another day. After all, this was a match that can be remembered for one of the club’s all-time greats playing a considerable part in lighting up yet another special European night at Old Trafford. “Ryan Giggs is not going to be going on forever,” added Moyes. He’s right, of course. But the man himself is giving it one heck of a go.