Ryan Giggs played the 1000th match of his career in Manchester United's 4-1 FA Cup win over Fulham at the weekend.

Giggs opened the scoring with a penalty and was deservedly named man of the match in the romp, continuing his penchant for marking milestones. 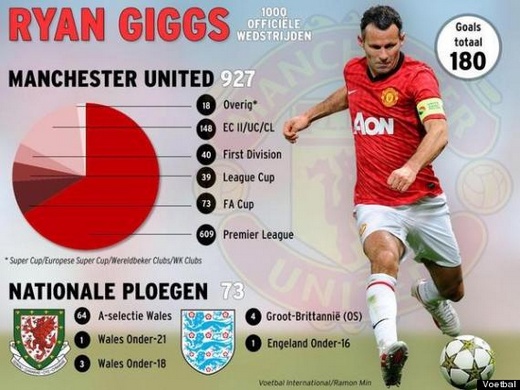 The 39-year-old scored the winning penalty in the 2008 Champions League final as he surpassed Sir Bobby Charlton's record as United's all-time record appearance holder, having scored the title clincher on the final day of the season at Wigan.

And last year he marked his 900th match for the Red Devils with a last-minute winner away at Norwich City.

Giggs is the only player to have played and scored in every season of the Premier League since it began in 1992 however has failed to register in the top flight this term.

His penalty on Saturday was his third of the season, after a brace at Chelsea in United's October League Cup defeat.