United remain top of the Barclays Premier League but the gap has been cut to four points following the Reds’ 1-1 draw against Swansea at the Liberty Stadium on Sunday.

Patrice Evra headed the Reds in front before Swans striker Michu – who else? – netted his 13th goal of the season in a see-sawing first half.

Sir Alex’s men then dominated second-half proceedings and twice hit the crossbar through Robin van Persie and Michael Carrick. But despite the lion's share of possession, a string of half chances and the introduction of veterans Ryan Giggs and Paul Scholes as the clock ticked down, the Reds couldn’t force a winner and had to settle for a first draw in 28 games.

Still, the result ensures United are top on Christmas Day and Sir Alex's men now have home games against Newcastle United and West Bromwich Albion to focus on.

At the Liberty Stadium on Sunday, the manager kept good on his promise to rotate his squad over the festive period and Sir Alex sent out his 26th different back-five combination of 2012. Most notable in this latest incarnation was the return of Nemanja Vidic, who made his 250th United appearance and his first start in more than three months.

The front six, however, remained unchanged from the Reds’ win against Sunderland eight days earlier. Michael Carrick and Tom Cleverley anchored the midfield, while Antonio Valencia and Ashley Young provided the width. In front of them, Wayne Rooney and Robin van Persie led the line.

The match eased rather than exploded into life, as both sides appeared content to merely feel each other out in the opening stages. Swansea were first to exert their influence, though, as Michu and Wayne Routledge both found space in which to pull the trigger.

That seemed to wake the Reds up and within the space of five minutes Rooney and Young had drawn smart saves from Swans stopper Michel Vorm.

The second of those, a reflex stop down to Vorm’s left after Carrick’s pass had split the Swansea defence and allowed Young to fire in a first-time shot, gifted United the corner from which the game’s opening goal arrived on 16 minutes.

Van Persie’s in-swinger came with plenty of pace and Patrice Evra rose to glance the ball towards the far post where it somehow squeezed between the woodwork and Swans midfielder Leon Britton.

It was the Frenchman’s third goal of the season and United’s 10th from a corner. And for a few minutes it looked as if Evra’s strike could be the first of many, as Sir Alex’s men poured  forward in an attempt to press home the advantage. 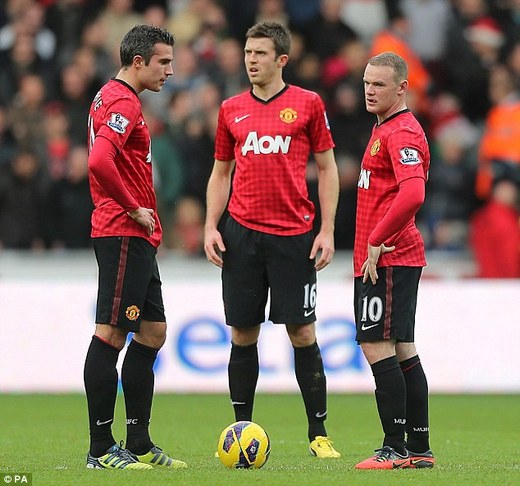 But just as United appeared to have gained control of the contest, Spanish striker Michu pounced to tap in from close range after De Gea could only parry Jonathan De Guzman’s stinging effort.

The equaliser came just before the half-hour mark and prompted a spell of sustained Swansea pressure. Michu, Routledge and De Guzman all shone as the match swung in the home side’s favour.

Still, the Reds never yielded any clear-cut chances and could even have gone into the break 2-1 up when Evra burst down the left, reached the by-line and found Rooney 10 yards out. The striker didn’t quite catch his low, left-footed effort cleanly, however, and Vorm did enough to keep the ball out and ensure parity at half-time.

The start of the second period proved similarly frustrating for Rooney, whose every misplaced pass or blocked shot was met with cheers by the home crowd.

He did release Ashley Young inside the area, though, after a Swansea mistake gifted the Reds possession in the final third. Young’s shot was well blocked by Ashley Williams and the Swans breathed a sigh of relief.

Down the other end, De Gea was forced to make two fine saves – first from distance, then from close range – as Kemy Agustien and then Routledge let fly with powerful efforts.

Rooney curled a direct free-kick into Vorm’s arms on the hour mark before dropping to the left side of midfield as Sir Alex brought on Javier Hernandez for Valencia and Young switched to the right flank. The change almost brought immediate dividends, as van Persie volleyed against the crossbar from Rooney’s tantalising cross.

The Dutchman then came within inches of playing a perfect pass into the path of substitute Hernandez. The Mexican couldn’t quite take the ball in his stride, however, and his eventual shot was blocked en route to Vorm. 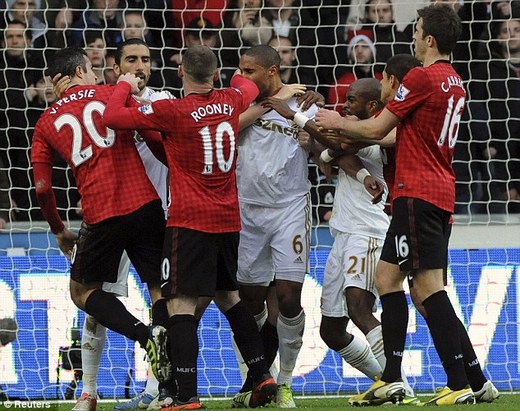 Rooney’s miserable afternoon was summed up when he failed to find van Persie, unmarked, on the penalty spot after a Swansea error gifted the Reds possession just outside the area.

United struck the crossbar for the second time after the break when Carrick’s near-post header crashed against the woodwork before van Persie and Young both saw goalbound efforts blocked in a frantic passage of play.

Half-chances fell to van Persie and Giggs in the closing minutes but there was no dramatic finish to this festive fixture. Instead, the Swans held on and United were left to rue a missed opportunity to maintain a six-point advantage at the top of the table.