Manchester United fell to an agonising 2-1 defeat at the Stadium of Light as a late Lamine Kone header was diverted into his own net by the unfortunate David de Gea.
Whabi Khazri opened the scoring with a third-minute free-kick, before Anthony Martial equalised, but United's defence was breached for a second time as Kone's powerful downward header from a corner rebounded off De Gea to send the Reds home pointless.
United boss Louis van Gaal made one change to his starting XI as Morgan Schneiderlin replaced Marouane Fellaini, but there was a new and quite aptly-named youngster on the bench with 21-year-old defender Donald Love included in the matchday squad for the first time on this Valentine's weekend trip to Wearside. Will Keane was also among the seven substitutes as a reward for his recent fine form in the Under-21s.
United headed into this clash unbeaten in 13 visits to the Stadium of Light and with the teams in the top four facing off on Sunday, the Reds knew it was an opportunity to close the gap. However, the quest for a crucial victory got off to the worst possible start after just three minutes. 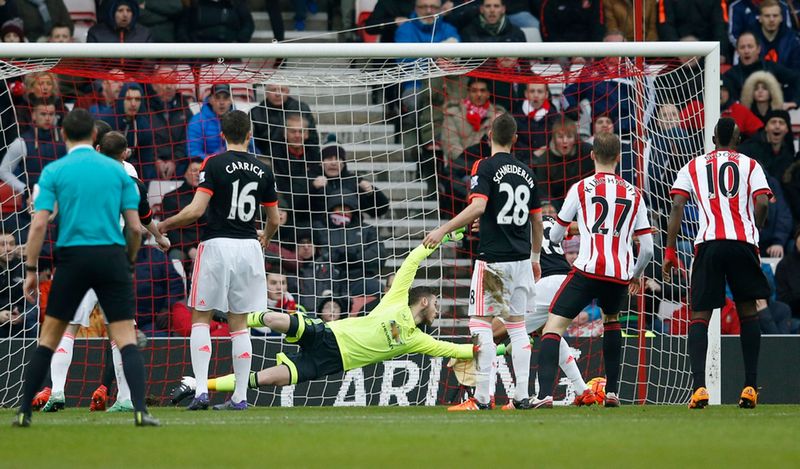 After Patrick van Aanholt was blocked by Matteo Darmian, Khazri's resulting left-wing free-kick evaded everyone, including De Gea, and nestled in off the far post to give the Black Cats a surprise lead. It was the French-born Tunisian international's first goal for the Black Cats following his arrival in the January transfer window.
Minutes later Jermain Defoe battled with Chris Smalling in the area and the United central defender's block was crucial in preventing a second goal for the hosts. Danger-man Khazri's fierce strike then inadvertently hit Schneiderlin on the arm, before he curled his effort over De Gea's crossbar.
That second scare seemed to spark the Reds into life and a succession of United corners followed before Wayne Rooney found Juan Mata, who opened the scoring in the 1-1 draw here last season, but his effort was straight at Vito Mannone. 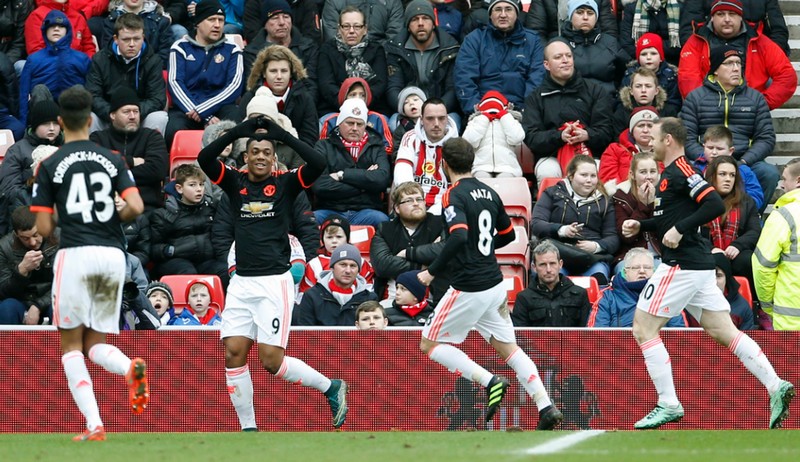 Love's heart must have skipped a beat when he was called off the substitutes' bench midway through the first half for his first-team debut in replace of the injured Matteo Darmian and United's equaliser immediately followed. Mata's low effort was saved by Mannone, but the rebound fell to Martial who delicately dinked the ball over the big Sunderland stopper from an acute angle to send the sides in level at the break.

POSSESSION: Sunderland 31% United 69%
SHOTS: Sunderland 8 United 5
SHOTS ON TARGET: Sunderland 1 United 3
CORNERS: Sunderland 0 United 5
Sunderland started the second half as they did the first with a succession of set-plays, one of which seemed to strike Rooney on the hand, before Defoe was denied his seventh goal in as many games as Daley Blind brilliantly blocked from close range. 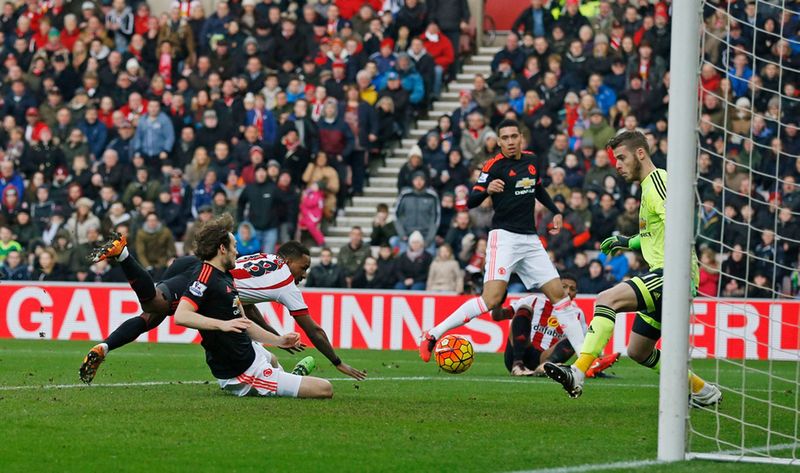 On the hour mark the hosts went close to regaining the lead as a quick counter attack sent Dame N'Doye one-on-one with De Gea, but the United number one saved well with his feet.
De Gea was busy again as he held onto Khazri's 25-yard direct free-kick, whilst at the other end, substitute Memphis was looking to celebrate his 22nd birthday with an immediate impact after coming on for Jesse Lingard and he nearly served up a gift for Mata but the Spaniard's shot was well blocked by substitute Jack Rodwell.
Kone forced De Gea into an acrobatic save, whilst Mata, who was heavily involved throughout, fired straight at Mannone. 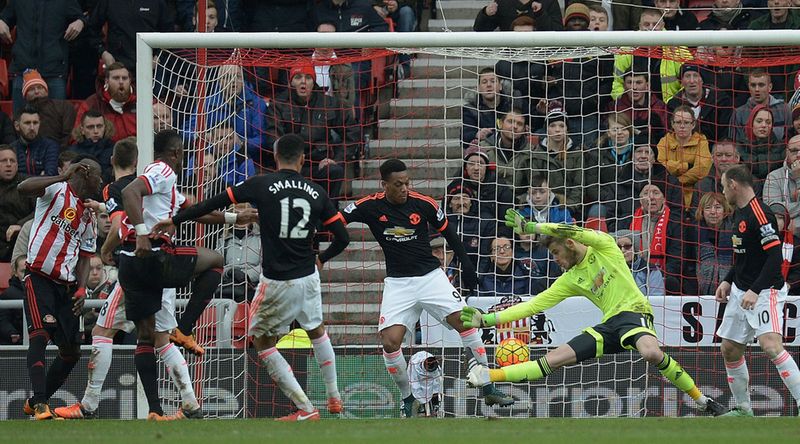 The Reds continued to press for the winner as Smalling latched onto Rooney's deep cross, but his header was diverted wide. Kone however would not waste his opportunity as his header into the ground from Kazri's corner seemed to hit De Gea and find its way into the net for what will sadly go down as an own goal.
United continued to press, this time to salvage a point and despite Memphis testing Mannone again late on, the Reds lost at the Stadium of Light for the first time in the Premier League.

#MUFC fell to an agonising 2-1 defeat at the Stadium of Light as a late Lamine Kone header was diverted into his own net by the unfortunate David de Gea. Match Report: http://goo.gl/wf0mHq