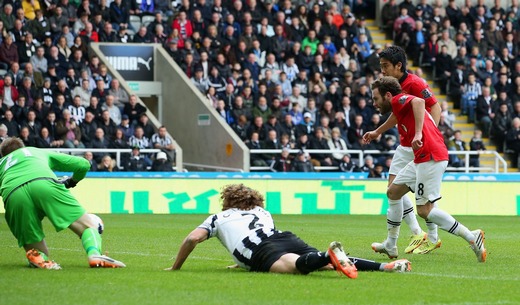 Mata’s first strike was a devilish free-kick and the second the cheekiest of finishes after good work from Shinji Kagawa and Hernandez. The excellent Kagawa set up Chicharito, who hit a post in the first half, for a predatory prod past Rob Elliot to prompt some disgruntled home fans to leave the ground with 20 minutes still remaining.

Anders Linedgaard made three wonderful saves to deny Papiss Cisse - the final stop truly astounding when a goal seemed certain - to keep a clean sheet that he will cherish on a rare start. Januzaj also sparkled after coming on for Ashley Young, who was taken to hospital with a thumb injury, and added a fourth in stoppage time following a delightful one-two with Mata, setting United up nicely for the midweek mission in Munich.

The match United boss David Moyes clearly had one eye on Wednesday’s Champions League tie at Bayern Munich when naming his side but it allowed several players to promote their claims for the trip to Germany. Of course, Juan Mata is ineligible for midweek, which is a great shame as he is looking more and more at home at the club. The record buy netted either side of half-time to set up a comfortable win before Javier Hernandez and Adnan Januzaj got in on the act with two fine goals from close-range. Newcastle looked low on confidence as they failed to lift the home crowd, but Moyes will be delighted with an accomplished performance and a 10th away win of the Premier League season - more than any other team.

The goals Chieck Tiote made two robust challenges on Mata before Dan Gosling clearly tripped Darren Fletcher on the edge of the box. Mata stepped up to curl a sweet free-kick past Rob Elliot’s left hand to register his second goal for the club. The third was not far away as, on 50 minutes, Shinji Kagawa pounced on a mistake by Fabricio Coloccini to head through to Javier Hernandez. The Mexican’s unselfish pass rolled past Kagawa but into the path of Mata, who majestically sat Coloccini on the ground as he desperately tried to atone for his error, before delicately slotting home. Kagawa was instrumental in the build-up to Hernandez’s effort, supplying a perfect cross for the Mexican to get on the scoresheet. In stoppage time, Mata turned provider to play in Januzaj, who clearly has a penchant for scoring in the North East after his double at Sunderland on his full debut.

Star men Mata pulled the strings and the Spaniard’s two goals show just what a hit he should become in a red shirt. Adnan Januzaj glided past the opposition with ease and Kagawa caught the eye once again, while Hernandez thoroughly deserved his goal after also hitting the woodwork.

Sub-plot Newcastle were seeking the double over United following their surprise 1-0 win at Old Trafford in December. Much had also been made of the fact that United have only won one match against teams in the top eight, a statistic that is no longer correct. The Tynesiders have been out of form but fancied their chances beforehand, especially when news of Wayne Rooney’s absence broke last night. 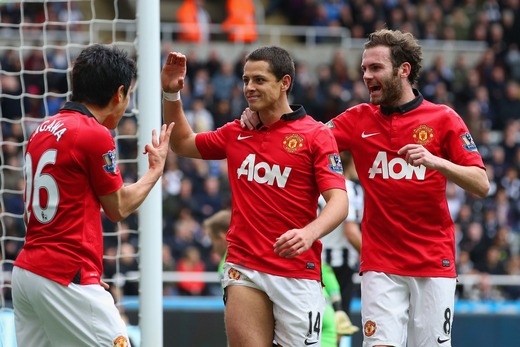 Move of the match The third goal came after an incisive move. Alex Buttner came on for Patrice Evra and bombed down the left on the overlap. Januzaj used the Dutchman as a decoy before threading a more threatening pass to Kagawa, who crossed to the near post for Hernandez to pounce from close-range.

In the stands The Toon Army was largely muted as all the noise came from the away end, high in the Leazes Stand. ‘Where’s your famous atmosphere?’ queried the travelling Reds who reeled off classic chants lauding the likes of Ole Gunnar Solskjaer, Andy Cole, Roy Keane and Jaap Stam. Former Newcastle manager Alan Shearer watched from an executive box and was the also the subject of some United songs, while current boss Alan Pardew was also in the crowd as part of his touchline ban. There was a real show of support for Moyes in the second half before the home fans voiced their disapproval when Januzaj added an injury-time fourth.