After wins for Chelsea, Manchester City and Arsenal on Saturday, the pressure was on Manchester United to deliver at Newcastle's Sports Direct Arena, scene of a 3-0 defeat last term.

Any headline writers ready to try and start talk of a relative crisis with a long international break on the horizon, were left disappointed as the Reds won by the same scoreline as January's loss - thanks largely to a blistering start on Tyneside. Jonny Evans and Patrice Evra both headed in corners and Tom Cleverley's sublime strike put the seal on the most impressive of victories on the road.

Evans and Cleverley scored only their second goals for the club while Evra notched his fourth, and first away from Old Trafford, on his 300th appearance since arriving from Monaco in 2006.

The Toon Army were forced to witness a rare home reverse and were convinced Papiss Cisse's 50th-minute effort had crossed the line before David De Gea clawed it away. Instead, a clean sheet was secured with the Reds' entire back four in exceptional form throughout the 90 minutes.

The opening quarter of an hour saw the visitors play comfortably the best football of the campaign so far as the Magpies were blown away in front of their expectant home crowd. Cleverley's weighted pass was headed down by Robin van Persie for Evans to brilliantly flick into the path of Danny Welbeck on five minutes but the striker could only supply a tame finish.

Van Persie's shot from a tight angle was kicked behind by Steve Harper and the Dutchman took the corner himself with Evans showing great desire to power home a towering header. The one-way traffic continued with Rafael doing brilliantly to collect a De Gea kick-out, linking with van Persie, and sending a thumping drive inches wide of Harper's right-hand upright.

It really should have been 2-0 in the 12th minute when Welbeck robbed a hesitant Harper and rode a desperate challenge from the keeper. With van Persie unmarked in the middle, the England international, off balance, was only able to drag the wrong side of the post.

Any concern that the glaring miss could prove costly proved unfounded as Rooney's free-kick was diverted behind by Harper's fingertips. From Rooney's resulting corner, Evra showed great movement to pop up in exactly the right place to nod home, prompting an inquest in the Newcastle defence about who should have been marking the Frenchman. Pardew regrouped his troops and the inevitable response started with Jonas Gutierrez whistling a drive off target, even if De Gea probably had it covered.

Although three Reds were booked, the worst tackle of the first half came from Cheick Tiote, who was cautioned for a separate incident, as the game became a little fractious. Most of the chances started to come the hosts' way as Ba and Yohan Cabaye blazed over and another Gutierrez effort was deflected behind for a corner.

Both teams mustered an opportunity from a set-piece as the half drew to a close - Carrick's flick-on evaded Rooney from a van Persie corner and Cisse skimmed a header wide when claiming, rightly, that his shirt was being tugged by Evra. There was a huge let-off for United at the start of the second half when Ba headed against the bar with De Gea stranded off his line but the keeper recovered to claw away Cisse's diving header from the rebound. There was a suggestion the whole of the ball had crossed the line but play continued despite the Magpies' appeals.

Newcastle kept pressing with Ba beating Rio Ferdinand to head wide so Sir Alex introduced more width by replacing Kagawa with fit-again Antonio Valencia. It helped United improve with Cleverley and Welbeck combining but the midfielder's wild finish squandered the opportunity. Rooney then forced a diving save out of Harper after capitalising on some slack play by Tiote.

Pardew's side still carried a threat and Hatem Ben Arfa could only contribute a wayward shot after being afforded far too much space to turn on a pass by Cabaye. However, van Persie had the ball in the net again, from Rooney's pass, only to be rightly flagged offside. 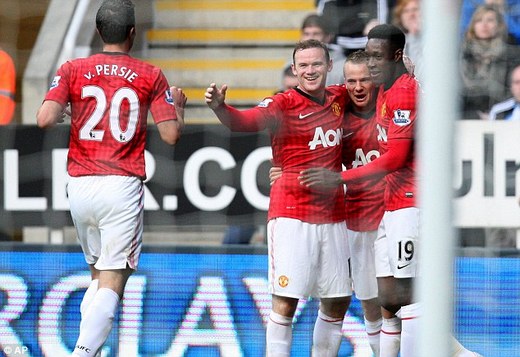 Six minutes later, Cleverley picked up a Rooney pass but there looked little danger to Harper's goal until he hooked a David Beckham-esque swirling drive past the keeper's despairing dive and into the top corner of the net. It was a moment of magic by the midfielder, who is looking more and more at home in the team.

De Gea bravely kept the hosts at bay, and took James Perch's studs in his thigh after the defender had already been booked, and Paul Scholes came on for Rooney in a bid to see out the final 10 minutes. Cabaye appeared to lose his cool after an off-the-ball clash with van Persie as things became somewhat heated in the closing stages with the Dutchman being withdrawn for Ryan Giggs as the clock ticked down.

Ba worked De Gea but much of the fire had long gone out of the hosts' attack, although not from their tackling. It was Scholes, however, who became the eighth player booked by Howard Webb after a foul on fellow substitute Shola Ameobi.

This was a stunning result for Sir Alex's side and sends out a warning to the rest of the Barclays Premier League - United are ready, willing and able to scrap for another title.