There may be those who are finding United's form frustrating this season but there is no disputing the entertainment and spirit at Old Trafford.

On 13 occasions, the Reds have fallen behind but this was the ninth victory secured from such a position of weakness. Bottom side QPR, supposedly lambs to the slaughter with newly-installed Harry Redknapp watching from the stands rather than taking charge, nullified the hosts in the first half and then had the audacity to score on 52 minutes through Jamie Mackie.

With no immediate response, the club's detractors must have been gleefully thinking about a third successive defeat for the first time since 2001. Yet Sir Alex's side turned the game on its head with three goals inside seven minutes. Jonny Evans, who seemed more determined than anybody to redress the balance, and Darren Fletcher both netted from Wayne Rooney corners and substitute Javier Hernandez did what he does best to make the points safe.

The Reds initially kicked off with plenty of purpose as Rooney and Robin van Persie were both advanced centrally with Danny Welbeck on the left and Ashley Young patrolling the opposite flank. With Fletcher starting his first Barclays Premier League game since 5 November last year in place of league ever-present Michael Carrick, complete control was established.

However, despite dominating possession, it took 16 minutes to almost carve out a first opening but Shaun Derry got an important toe to the ball to thwart Paul Schloles as he tried to nudge home inside the box. Van Persie then rippled the side-netting after Welbeck collected a Rooney pass and escaped down the left with the Dutchman’s classic attempt going just the wrong side of Julio Cesar’s right-hand post.

As the rain cascaded down at Old Trafford, QPR showed minimal attacking ambition but defended in numbers and with plenty of organisation and aggression. Clint Hill did well to beat Rooney to a cross from Patrice Evra following nice interplay with Welbeck and the best attempt of the opening half hour saw Young lash wide after Scholes hooked on rather than opting to volley a looped tee-up by Rooney.

United’s patient, probing approach drew some criticism from the home fans but Evra burst into the area with promise after combining well with van Persie, only to shoot tamely at Cesar.

Sir Alex instructed Young and Welbeck to switch flanks and it almost reaped instant dividend when the latter created a chance for Rooney but the striker’s scuffed effort was blocked by the increasingly busy Cesar. The Brazilian keeper was again called into action when Rooney unleashed a firmer drive but there was relief at the other end when an assistant referee flagged for offside before Mackie dived to head past Anders Lindegaard.

Controversy reigned before the interval when Hill shoved Young in the box and furiously accused the England international of diving. Referee Lee Probert took no action against either player even though they squared up, and Derry also became involved in the fracas, presumably still smarting from the incident that led to his dismissal in this fixture last term.

Sir Alex's side lacked the imagination to break down the massed ranks in the opening half and Adel Taarabt showed enough flair for the visitors to hint that a shock goal could not be ruled out, despite a game-plan clearly designed to hold out for a point.

Indeed, seven minutes after the restart, Rangers caught United napping at a corner. Taarabt returned the ball to unmarked taker Kieron Dyer, who cut in past van Persie to centre dangerously. Lindegaard could only touch the ball into the path of Mackie, who gratefully opened the scoring.

The Reds were rocked and Taarabt floated a free-kick over the top after Scholes was cautioned for a clumsy foul on Dyer. Sir Alex introduced Anderson and Hernandez for Young and Scholes in a desperate bid to fire up his troops while Anton Ferdinand, Rio's brother, replaced Armand Traore.

With the tension starting to build, the scores were levelled following a Rooney corner on the left. Welbeck won the header at the far post  and, although Hernandez was unable to reach it, Evans powered in with real conviction to force home a close-range header. 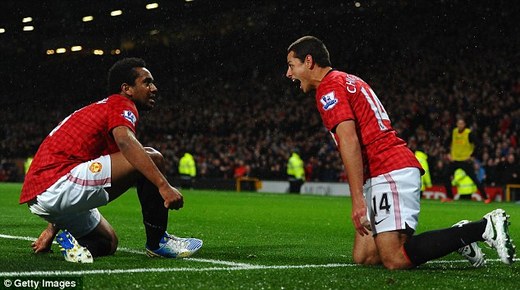 Suddenly, the mood changed completely with the fans roaring the galvanised Reds on. Fletcher went close with a raking drive and then rose to head another Rooney corner emphatically past Cesar. Three minutes later, Anderson showed just what a player he can become by cutting QPR apart with an electrifying burst of acceleration. Hernandez took a touch with his left foot to control the precise pass and then produced a searing finish with his right.

Now clicking through the gears, van Persie could only fire behind the goal after another incisive move and teenager Nick Powell, fresh from an impressive Champions League debut in midweek, came on for another taste of the action - soon producing a delightful backheel.

It was probably a case of damage limitation for QPR from then onwards, but caretaker boss Mark Bowen urged his side to keep attacking until the end and Hill's header was cleared off the line by the alert Rafael. Rangers will hope for a new era under Redknapp while United are back on top of the table ahead of Manchester City's clash with Chelsea on Sunday.