Manchester United are the champions of England for a record-extending 20th time, after a swaggering first-half display of champagne football overcame Aston Villa at Old Trafford.

Robin van Persie's 31-minute hat-trick - including a staggering volley - had the outcome beyond doubt by the interval, and a relatively low-key second period passed without major incident as United ascended the throne in comfortable fashion. 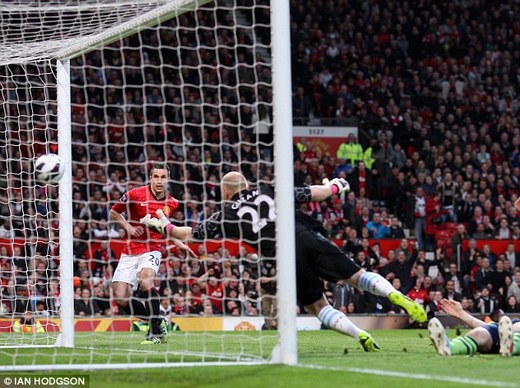 After Manchester City's defeat at Tottenham on Sunday afternoon, the Reds knew that victory would wrench the Premier League trophy back with four games to spare, and Sir Alex Ferguson sent out a side so eager to do so, that it took them just 81 seconds to forge ahead.

Old Trafford shook with joy, and the first renditions of 'campeones' were ringing around the brimming stadium when van Persie passed up the chance to double his tally, volleying just over from Valencia's deflected cross in the third minute.

As a rampant United start continued to promise goals, the Dutchman unselfishly headed down for Shinji Kagawa after more sterling work from Giggs, only for the Japanese schemer's close-range effort to be blocked by Ron Vlaar. Villa were quickly indebted to the woodwork as Rafael's swerving effort thudded away off Guzan's right-hand post, but Christian Benteke fired wastefully off-target almost immediately to remind the hosts of their defensive duties. 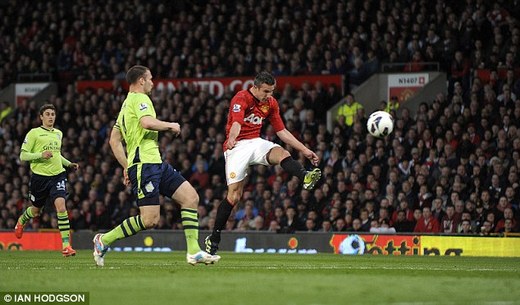 But if that was a sobering moment for the Reds, Rooney and van Persie quickly combined to intoxicate Old Trafford once again with a goal of undiluted brilliance. Already looking sharp in a deep, roving role, Rooney clipped a magnificent 40-yard pass into the path of van Persie, whose audacious, first-time volley hurtled across Guzan and into the bottom corner.

A roared scoff of amazement filled the air, before again making way for chants commemorating United's increasingly inevitable feat. Though Villa, to their credit, continued to probe for an unlikely route back into the game, the attacking incision of Rooney, van Persie, Giggs and Kagawa gave them no respite in defence.

The latter trio combined shortly after the half hour to seal the Dutchman's double-quick treble. Kagawa's fine through ball sent Giggs scampering into the area, and the veteran astutely squared for van Persie to take a touch, plot a path past Guzan and belt a finish in off the upright. 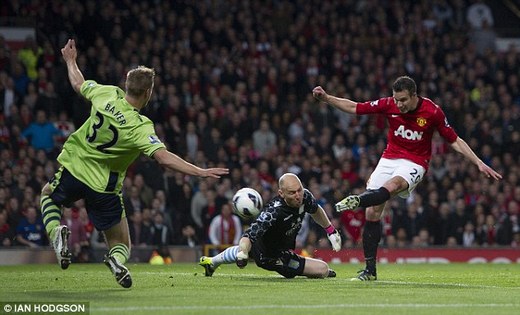 Having all-but sealed United's 20th title, the Reds' number 20 was also homing in on personal glory, moving to the top of the Premier League's scoring charts with his 24th strike of the season.

Van Persie's first contribution of the second period actually came at the other end of the field, clearing Andreas Weimann's header off the line as the visitors made a bright start to the second period. David De Gea was forced into a low save by Benteke, then a wonderful, full-length tip over the bar to keep out substitute Karim El Ahmadi's fine long-range effort.

Guzan's involvement was comparatively muted, facing only sporadic attempts from the hosts. Rooney twice came close in a matter of seconds before making way for substitute Danny Welbeck, while Kagawa undid a beautiful feint by blasting high into the Stretford End after fine wingplay from Valencia.

There would be no fourth goal, leaving United's number 20 as the man in the spotlight. Van Persie's goals have made the difference to last season's dramatic dethronement, but praise must also be reserved for those who stood shell-shocked at the Stadium of Light last May. 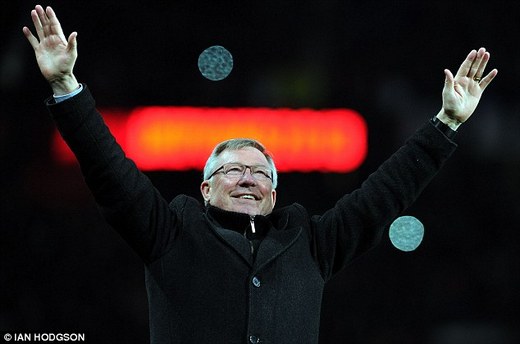 Legend: Sir Alex Ferguson salutes the crowd after the resounding victory at the Theatre of Dreams

We were told that the landscape of English football had changed for good. Yet, here we are, a year on, and once again Sir Alex and his indefatigable players are atop the pinnacle of the Premier League, surveying all below them as worthy champions.