On an unforgettable afternoon at Old Trafford, Manchester United supporters heralded their champions and bade emotional farewells to Sir Alex Ferguson and Paul Scholes before, during and after a 2-1 victory over Swansea.

Javier 'Chicharito' Hernandez slid home the opening goal of the game shortly before half-time of a game in which United bossed possession, only for Michu to draw the visitors level shortly after the interval.

Swansea improved markedly after the break, and either side could have secured victory in an open second half, but it was left to unlikely hero Rio Ferdinand to blast home a Stretford End winner with just three minutes remaining.

It was a thrilling finish to a game which flickered without igniting for large periods yet, however exciting the game had been, it would never have matched the occasion. Old Trafford swayed and resounded for long portions of the afternoon in appreciation of two of United's greatest servants and the return of the Barclays Premier League trophy.

Both teams and their staff formed a guard of honour ahead of kick-off, allowing Sir Alex to enter the arena to a rapturous, spine-tingling reception in which over quarter of a century of residual gratitude poured in the direction of one man. 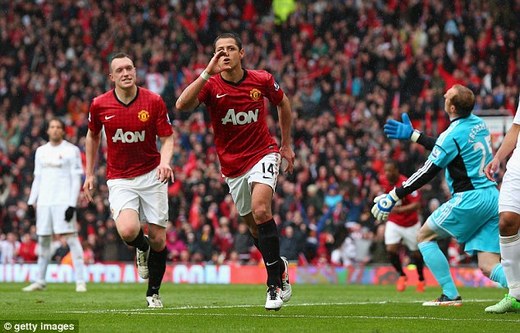 The manager's team selection had hinted at an open, attacking approach, with Chicharito, Robin van Persie, Danny Welbeck and Shinji Kagawa all included in a fluid forward line, and the quartet duly served up some delicious interplay in the opening stages.

In the fifth minute, van Persie sent Chicharito through on goal, on the left side of the area. Unfazed by his tight angle, the Mexican lifted a left-footed effort against the underside of Gerhard Tremmel's crossbar. As the ball rebounded to safety, Phil Jones seized upon it and drove into the area after two sublime one-two exchanges with van Persie and Chicharito, only to lose control of the ball at the vital moment.

Demonstrating their willingness to partake in an open encounter, Swansea instantly counter-attacked at speed and should have opened the scoring, only for Pablo Hernandez to send his effort comfortably wide of David De Gea's far post.

As both sets of supporters continued to set a booming soundtrack, the party continued irrespective of events on the field. Chico Flores managed to deflect Chicharito's back-post header wide, while Evra and Scholes both directed half-hit efforts straight at Gerhard Tremmel from promising positions as United dictated play and sought a goal to crank the volume up still further.

Kagawa took up the baton himself around the half-hour mark, first being denied a fair shout for a penalty after tangling with Neil Taylor, then cutting infield and driving a left-footed effort high into the Scoreboard End.

As United's monopoly on possession grew, it appeared a mere matter of time before the deadlock was broken. Sure enough, shortly after arrowing a first-time volley over the bar, Chicharito pounced to supply the opening goal. Van Persie's curling free-kick from the right flank was poorly defended by the visitors, ricocheting off Ashley Williams and falling perfectly for United's number 14 to slide home a simple finish.

With further cause for celebration, off went a flare in the Scoreboard End and van Persie twice sought to double United's advantage before the break, first unleashing a piledriver which Tremmel did well to smuggle wide, then curling well over with a right-footer when Scholes was well placed.

Swansea emerged for the second half on the front foot, and drew level within four minutes of the restart. A sustained spell of pressure culminated in Nathan Dyer crossing from the right, and Michu reached the ball ahead of the diving Phil Jones and flicked an unstoppable finish past De Gea.

Dander up, Swansea quickly pressed for the lead and Wayne Routledge almost provided it, stabbing just wide after a neat one-two with Michu. Although United steadied and began chasing the lead once more, another quick counter from the visitors led to Pablo Hernandez bringing a sharp stop from De Gea. Welbeck's cross was minimally ahead of Chicharito's desperate lunge as the Reds aimed to capitalise on a poor Swansea clearance, but attentions quickly switched back to one of the day's departing heroes as Scholes left the fray to a rapturous reception.

The midfielder was joined by Welbeck in making way for Anderson and Antonio Valencia, and the Brazilian was quickly in the thick of the action, crossing for Chicharito to head wide, via a deflection, then drilling a low volley just off-target with Tremmel beaten. It took brave, last-ditch defending from Jones and Vidic to prevent Flores from turning home on two occasions in quick succession as Swansea continued to play in free-spirited fashion, but Vidic almost pinched the points with a back-post header which sneaked wide of Tremmel's goal.

It was, rather, the Serbian's central defensive partner Ferdinand who had the game's final say, taking advantage of poor defending by lashing home at the Stretford End after van Persie's corner had been allowed to bounce through to him.

The goal - making Rio the 20th United player to score a league goal in the 20th title-winning season  - provided the momentum for another wave of sound which would carry through, beyond the final whistle, until the day's main events: United's coronation and fond farewells to two of the club's most loved servants. 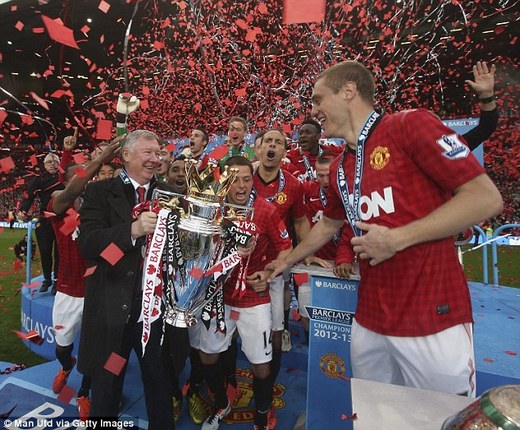 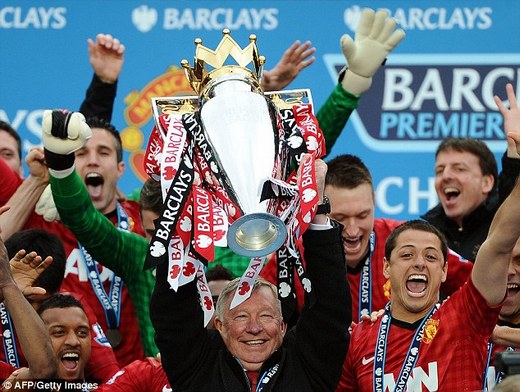 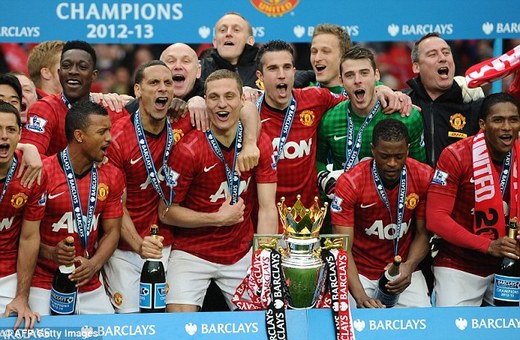