Manchester United’s winless run was extended to six games as Norwich City claimed a shock Barclays Premier League victory at Old Trafford.
Louis van Gaal’s team dominated proceedings once again but were stunned by breakaway goals either side of half-time from Cameron Jerome and Alex Tettey.
Anthony Martial pulled one back with 25 minutes to go but, despite late pressure, the Canaries held on to record their first-ever Premier League victory at Old Trafford and inflict the Reds’ first home defeat over 90 minutes this season. 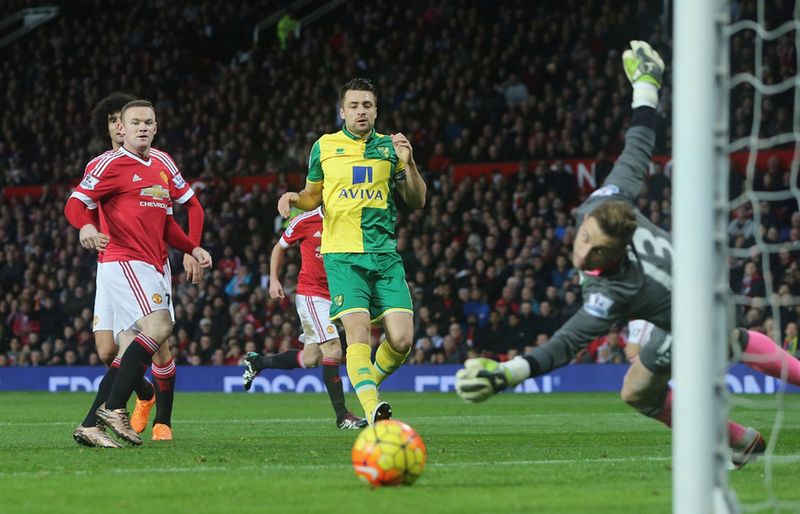 Wayne Rooney returned to make his 500th appearance, as van Gaal made four changes to his starting line-up with Chris Smalling, Phil Jones and Ashley Young also back. And the captain had the ball in the net in the 10th minute, after Juan Mata’s neat through-ball to Marouane Fellaini, only for the Belgian to be flagged offside.
Memphis, playing wide left, bent over from the edge of the ‘D’ and, moments later, Mata’s marauding run culminated in Rooney dragging a left-footed shot wide as United started brightly. It was 20 minutes before Norwich had a first real sight on goal, but Tettey fired harmlessly wide after being found by Wes Hoolahan.
United continued to push for the opener and Martin Olsson’s attempted clearance ricocheted off Michael Carrick to Rooney, who curled in a devilish cross but Russell Martin got to the ball ahead of Memphis and the ball bounced over. 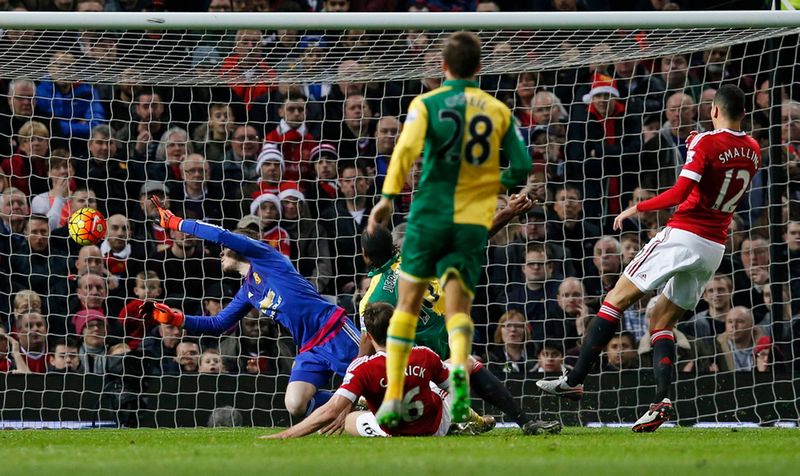 Out of nowhere, Norwich took the lead in the 38th minute as Nathan Redmond slipped a pass into the path of Jerome and the striker held off his man to fire past David De Gea. It was the first goal United had conceded at home since Daniel Caligiuri netted for Wolfsburg in September.

Possession: United 70% Norwich 30%
Shots at goal: United 5 Norwich 2
Shots on target: United 0 Norwich 1
Corners: United 6 Norwich 0
With the rain teeming down at the start of the second half, United upped the tempo in the search for an equaliser but it was the visitors who doubled their lead. Carrick lost the ball in midfield and Jerome played in Tettey, who toe-poked beyond De Gea. 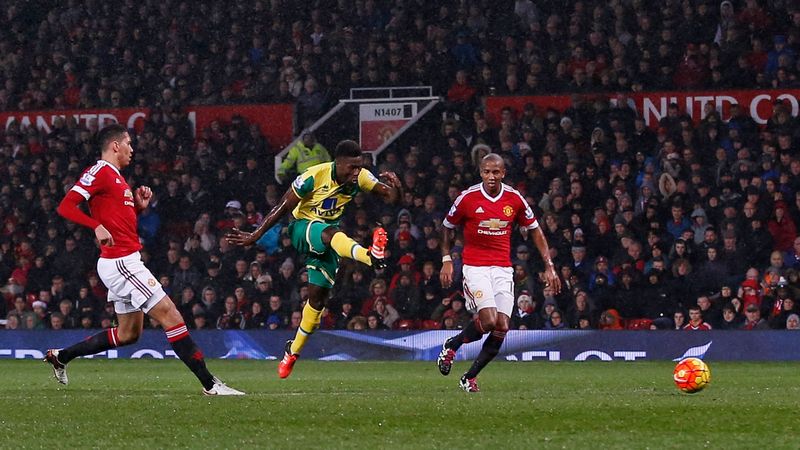 The Stretford End continued to sing loudly in an attempt to inspire their team back into the game and Rooney hit a scissor-kick narrowly over from Martial’s cross, before van Gaal brought on Ander Herrera in place of Fellaini.
Memphis found himself in space on the left side of the box but couldn’t pick out a red shirt with his cross and, at the other end, Hoolahan shot straight at De Gea from the edge of the box. 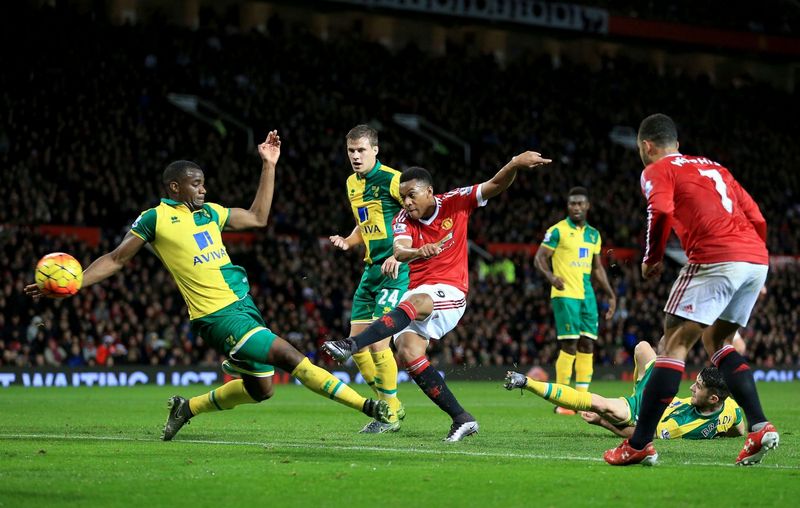 United finally made the breakthrough in the 66th minute. Rooney narrowly failed to get a head to Young’s cross on the right but the ball fell to Martial, who blasted home despite the efforts of several Norwich defenders to clear.
That was the cue for the home side to up the ante in search of an equaliser and Daley Blind’s dangerous low cross agonisingly evaded everyone, before Canaries goalkeeper Declan Rudd palmed away a Mata free-kick.
With United pushing forward in numbers, Norwich were a threat on the break and De Gea had to be alert to keep out substitute Youssouf Mulumbu’s low shot.
As the game entered stoppage time, Smalling pushed forward but narrowly failed to get his head on a cross. Soon after, the defender ran onto Mata’s chipped through-ball but could only head inches wide before clattering into Rudd.
That proved to be United’s final chance of the game as van Gaal’s men fell to a third straight loss in all competitions.

Van Gaal: "We were not good enough to win; that is a fact, we have lost. We have never lost this season at home and we are in a bad period and you can see what (a lack of) confidence is doing to my players."

Mata: "It’s very frustrating not to win, especially at home. We feel deeply sorry for the fans, I think they’re incredible, so we have to do better for them."