The Dutchman’s 12th goal since his summer move from Arsenal was enough to settle an entertaining fixture and end a worrying five-game streak in which the Reds have conceded first.

Although Sir Alex’s men scored just once, there were plenty of positives from the performance, including a first clean sheet in 10 games and outstanding showings from Brazilian pair Anderson and Rafael.

On Sam Allardyce’s last visit to Old Trafford the then Blackburn boss saw his side lose 7-1 and on a wintery Wednesday evening he must have feared the worst when he saw United’s teamsheet.

Sir Alex fielded an attack-minded XI, managing to accommodate Wayne Rooney, Robin van Persie and Javier Hernandez in a front three. Anderson was rewarded with his second league start of the season for his game-changing cameo against QPR, while Michael Carrick and Tom Cleverley were also recalled in midfield.

In his programme notes, Sir Alex implored his players  not to concede first for a 14th time this season and the Reds duly obliged. Indeed, Hammers goalkeeper Jussi Jaaskelainen was picking the ball out of his net inside the first minute as van Persie’s side-footed shot  struck James Collins and looped over the hapless Finnish stopper.

As much as the Dutchman benefited from a huge stroke of luck, his skill in the goal’s build-up, dinking the ball over Winston Reid before rounding the defender to effectively collect his own pass, was breathtaking in its execution.

Kevin Nolan came close to equalising on 11 minutes when he flicked on Matt Taylor’s wide free-kick at the near post but not before he’d scythed down Tom Cleverley to earn the game’s first booking.

West Ham made a mockery of suggestions that Sam Allardyce’s teams only play long-ball football. The visitors preferred to play a patient passing game, working the ball out wide for either Taylor or Matt Jarvis to whip crosses in to Andy Carroll.

Carroll did volley over on 27 minutes after the ball fell to him following a route-one free-kick but the striker largely struggled to impose himself on the game.

Down the other end, Hernandez forced a smart save from Jaaskelainen down to his left when the Mexican made space for himself on the edge of the area and unleashed a wicked drive from 20 yards. Anderson then sliced high and wide, while Evra couldn’t find the final ball after good vision from van Persie to find the left-back in acres of space.

As the first half drew to a close, Anderson could reflect on another fine 45 minutes, while his fellow Brazilian, Rafael, was equally impressive. He didn’t put a foot wrong in defence, as he headed, tackled or intercepted everything that came his way.

A lethargic start to the second half presented half chances to both Mohamed Diame and Carroll before the Reds woke up and Cleverley sent a half volley whistling over the crossbar. 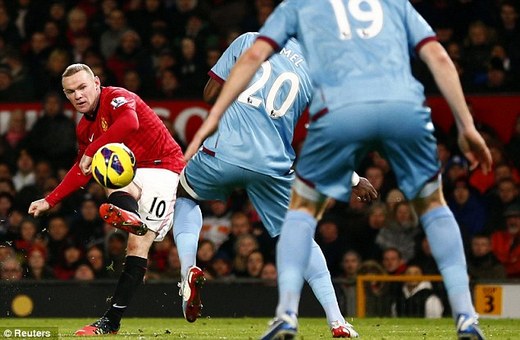 Van Persie hit a free-kick straight at Jaaskelainen after being upended 20 yards out by Joey O’Brien. Then Rooney drew a full-length save from the Finn when he curled an effort towards the far post and West Ham somehow managed to avoid conceding from the resulting corner when both Hernandez and Jonny Evans went close during a frantic goalmouth scramble.

Anderson stung Jaaskelainen’s palms with a scorching effort from 25 yards on 72 minutes but United were otherwise wasteful in the final third. Crosses were overhit and passes misplaced time and time again, as the Old Trafford crowd grew growingly restless.

When Lindegaard produced a point-blank save to deny Carlton Cole an equaliser it rammed home the reality that West Ham were just one moment away from snatching a draw.

Thankfully for the majority of those inside Old Trafford, that moment never came (although substitute Modibo Maiga jinked inside and tried his luck from 12 yards and Nolan had an injury-time effort blocked) and Sir Alex’s men hung on to claim a hard-earned three points.