December 13, 2010
Posted by Steven Tan | Source from The Press Association 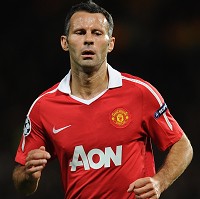 Ryan Giggs accepts Manchester United's inconsistent form this season is the major reason why they have not been given the credit he feels they deserve for a 15-match unbeaten run.

United put that record on the line on Monday night in an eagerly-awaited top-of-the-table Premier League duel with Arsenal at Old Trafford.

"We are proud of the unbeaten record," Giggs said. "People have not given us the respect we think we deserve but that is probably down to the manner of our results."

Victory over the Gunners would put Sir Alex Ferguson's men in pole position to regain their title, while even a draw would leave United favourites by virtue of their game in hand, to be played at Blackpool next month.

Yet Giggs acknowledges the Red Devils still have to convince plenty of pundits they are the real deal, even if some of their results - notably at Aston Villa last month - were worthy of famed late scraps of old.

He said: "We have thrown away games we should be winning. But we have dug results out as well."

Giggs has paid tribute to Arsenal midfielder Samir Nasri, whose recent performances have allowed Arsenal to shrug off the potentially devastating loss of star man Cesc Fabregas due to injury.

"Nasri has probably been one of the best players in the Premier League this season," said Giggs.

"He has got balance and speed, can play on either wing or off the front. He is really versatile and has scored some great goals as well. He really seems to have come of age this year.

"Arsenal deserve a lot of credit for the way they have coped with losing a quality player like Fabregas and still carried on winning."